USANA Health (NYSE:) Sciences describes itself as a “direct-selling nutrition, personal health, and wellness company.” The company was founded in 1992 and went public in 1995, but the stock started to take off after the Dot-com bubble burst. Between late 2000 and the summer of 2018, the share price rose from 22 cents to almost $138 for a cumulative gain of 62 600% or 40% compounded annually. This is how fortunes are made.

The past four and a half years have destroyed a big part of those fortunes. USANA stock is down 57% from its July 2018 peak. The company is still decently profitable and debt-free, but revenue growth has been close to 0% for years. The good news is that even no-growth companies become too cheap to ignore at some point. How close is USANA stock to being that cheap? Let’s try and find out with the help of the Elliott Wave principle. 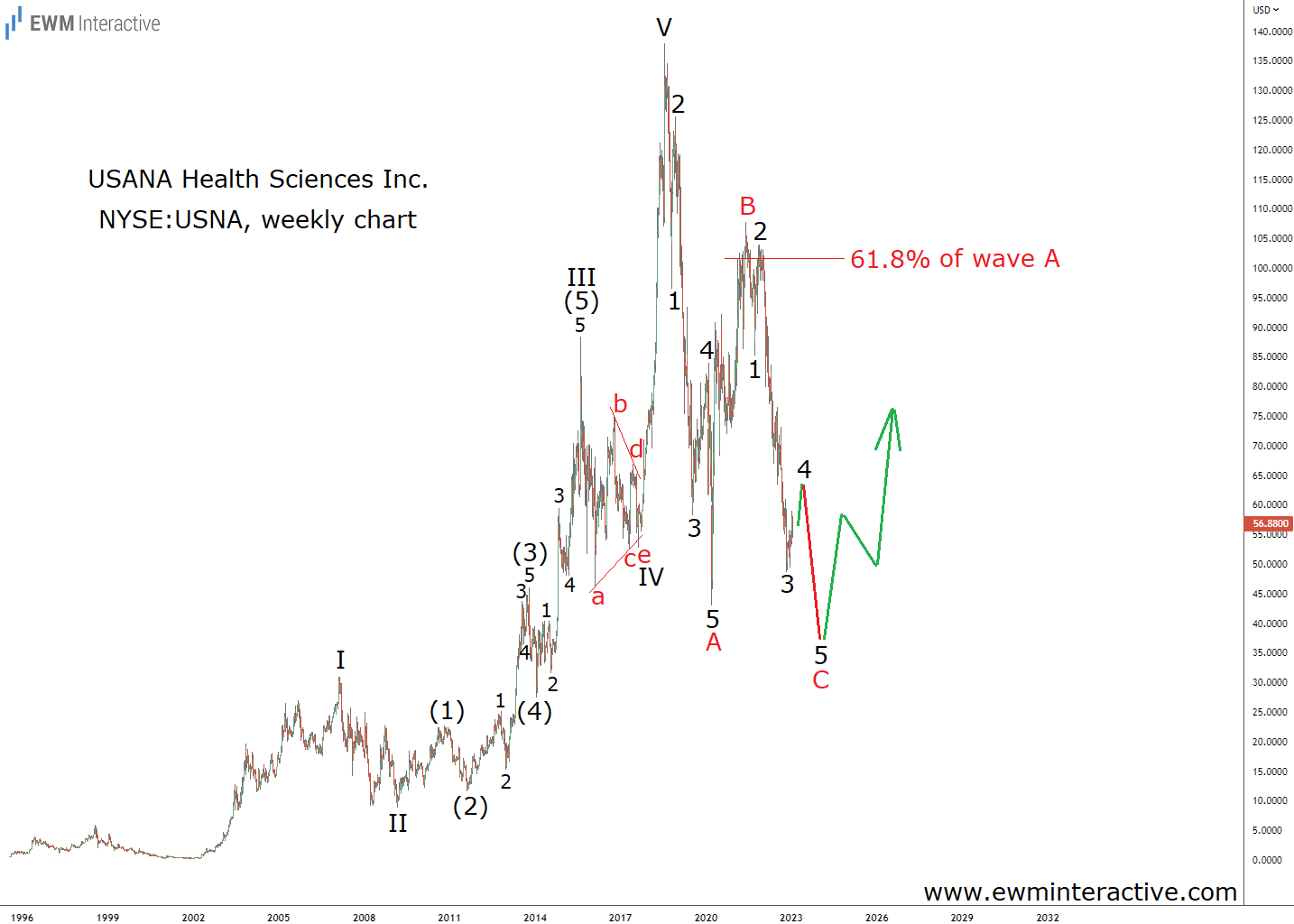 USANA ‘s weekly chart shows that the uptrend from $0.22 to $137.95 can easily be seen as a five-wave impulse. We’ve labeled the pattern I-II-III-IV-V, where wave II is a sharp drop, while wave IV is a triangle correction. Two lower degrees of the trend can be seen in the structure of wave III. Wave V is extended since it is longer than both I and III.

USANA Stock Is On Its Way to the Bargain Bin

Extended or not, every impulse is followed by a correction that erases most or all of the fifth wave. This is precisely what’s happened to USANA. Once wave V finally ended, the share price crashed just as quickly. A five-wave impulse in wave A dragged it down to $43 in March 2020. The following choppy and overlapping recovery to the 61.8% Fibonacci resistance level near $108 is marked as wave B. So far, the current selloff to $48.61 must be part of the final wave C.

C-waves usually breach A-waves’ end-point, putting downside targets below $40 within reach. Once there, however, the 5-3 wave cycle that began in December 2000 would be complete. Furthermore, USANA would be trading at a P/E of about 10, not to mention its net cash position of $250 million. If this analysis is correct, a notable recovery can be expected to begin from the ~$35 shared area.