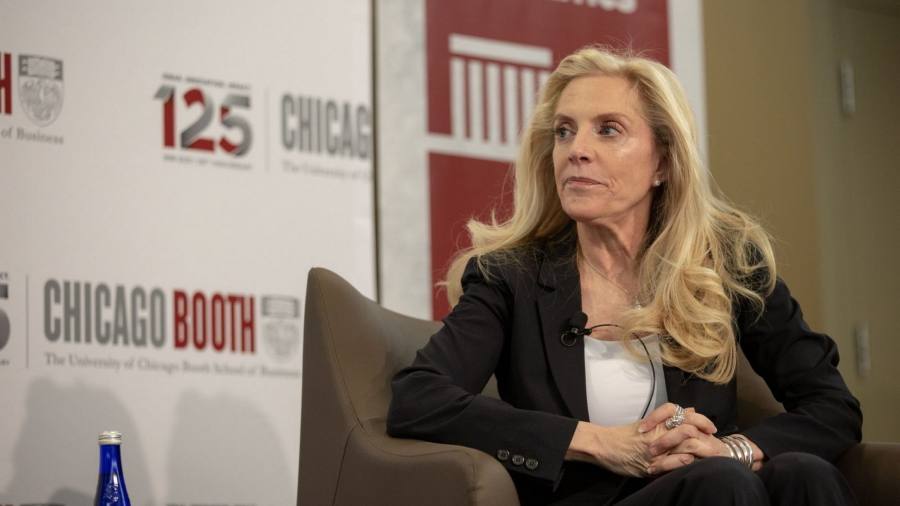 
Wall Street stocks fell on Thursday after central bankers vowed to “stay the course” on fighting inflation, and as investors analysed a new batch of data for clues about the health of the US economy.

The benchmark S&P 500 index closed 0.8 per cent lower, while the technology-heavy Nasdaq Composite lost 1 per cent.

Thursday’s equity market moves came as Lael Brainard, vice-chair of the Federal Reserve, said “it will take time and resolve” to get “high” inflation back down to the US central bank’s target of 2 per cent.

“We are determined to stay the course,” Brainard said at an event hosted by the University of Chicago’s Booth School of Business.

Earlier in the day, European Central Bank president Christine Lagarde said in a panel discussion at the World Economic Forum: “We shall stay the course until . . . we can return inflation to 2 per cent in a timely manner.”

The stock index declines on Thursday followed data releases giving the latest signals about the state of the world’s largest economy.

Initial claims for US unemployment benefits fell to 190,000 in the week ending January 14 from 205,000 in the previous week, a report showed, indicating labour market resilience despite the Fed’s efforts to tighten monetary policy. Economists polled by Reuters had expected 214,000 claims.

But a separate release on Thursday showed that the rate of US new home construction fell to a five-month low in December as higher mortgage rates weighed on demand.

A day earlier, weak US retail sales figures and signs of a steep decline in industrial production had pushed the S&P 500 down 1.6 per cent.

Amid rising confidence that inflation has peaked, concerns have intensified about the possible depth of an expected recession and the effects of the Fed’s interest rate rises on company profits.

Microsoft’s announcement on Wednesday of plans to cut 10,000 workers only added to the gloom, while consumer goods conglomerate Procter & Gamble’s shares slid after reporting on Thursday that net sales slipped in its latest quarter from a year earlier.

US Treasuries, which had rallied across the board in the previous session, came under some pressure on Thursday. The yield on the benchmark 10-year note rose 0.02 percentage points to 3.4 per cent.

Elsewhere in equity markets, Hong Kong’s Hang Seng index fell 0.1 per cent and China’s CSI 300 added 0.6 per cent, with both indices up sharply in recent months thanks to Beijing’s reversal of strict zero-Covid policies in December.

Prices for Brent crude, the international oil benchmark, rose 1.5 per cent, erasing earlier losses, to trade at just over $86 a barrel.