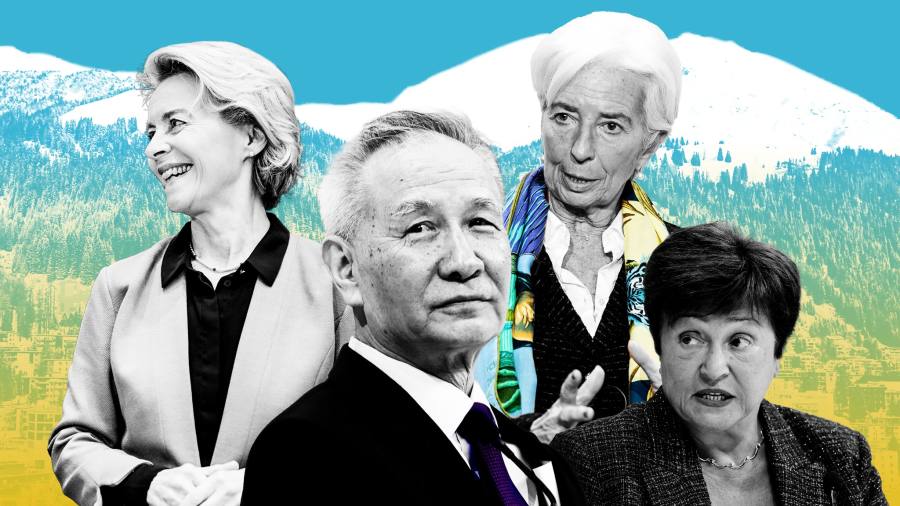 Things are looking up for the global economy


Sometimes, optimism can be infectious.

The cheery mood in financial markets, where global stock markets have risen about 4 per cent in the first three weeks of the year, spread this week to the rarefied atmosphere of the World Economic Forum in Davos.

The annual gathering of business, economic and political elites in the Swiss Alps divides opinions. But it is an ideal place to take the global temperature on economic sentiment — and the consensus view seemed to be that conditions had bottomed out and were becoming more positive.

Many had expected 2023 would bring a lasting hangover from Russia’s war in Ukraine, continued Chinese economic weakness and the devastating effects of high energy and food prices on living standards across the world.

Instead, delegates came to the mountains to cheer three new developments that improve the outlook.

Firstly, China’s decision to end its zero-Covid policy spurred hopes of a bounceback in one of the world’s three large economic zones. Second, a fall of over 80 per cent in wholesale natural gas prices was projected to bring relief to another, Europe. And finally the Inflation Reduction Act, which provided huge subsidies for a green transition, was forecast to power the other leading global economic area in North America.

Many business leaders felt that prospects for their companies had been transformed from a few months earlier.

In a session at the forum that was supposed to be discussing the cost of living crisis, Unilever chief executive Alan Jope said his company was “gearing up for revenge spending” from Chinese consumers blowing savings accumulated over three years of Covid lockdowns.

Vicki Hollub, chief executive of the US oil company Occidental, said the green subsidies in the US Inflation Reduction Act would allow significant investments in the capture and storage of carbon dioxide and that was positive for growth and the environment. “It is one of the most transformational passages of a bill ever in the world,” she said, “and it is going to jump start a lot of things.”

European business leaders were more cautiously optimistic. Christian Sewing, chief executive of Deutsche Bank, talked about some “more optimism on the economy”, and Jean Marc Ollagnier, chief executive of Europe at Accenture said most European CEOs were being “optimistic about the year ahead, [having risen] to the challenge to be more resilient”.

But the general expectation is now for growth, rather than the significant recession in Europe that most economic forecasts had predicted just a few weeks ago.

Soon, political leaders had caught the positive bug. German chancellor Olaf Scholz predicted his country would avoid a recession, while Ursula von der Leyen, European Commission president, promised a relaxation of state aid rules to accelerate Europe’s move towards clean energy and took credit for the fall in natural gas prices. “Through collective effort, we brought down gas prices quicker than anyone expected,” she told the main hall. The UK’s prospects have also improved with cheaper natural gas, Andrew Bailey, governor of the Bank of England, said this week on a visit to Wales.

The Europeans at Davos were eclipsed, however, by Liu He, China’s vice-premier, who predicted growth in his country would rebound from a lacklustre 3 per cent to a more typical rate of 5.5 per cent. To the delight of US business leaders at a private lunch, he announced that “China is back”.

Jozef Síkela, the Czech industry minister, said the difference now compared with last autumn was “like a heaven versus a hell”. He added: “OK, heaven is not as affordable as it was before [Russia’s invasion of Ukraine], but it is affordable.”

If those comments were largely country specific and anecdotal, one could also listen to the international organisations that decided to change their own outlooks on the global economy.

The IMF, which said at the start of the year that 2023 was going to be tougher than 2022, signalled a change of course. Kristalina Georgieva, its managing director, said her new message was that “it is less bad than we feared a couple of months ago”.

The IMF will come out with new forecasts in a week’s time which were likely to be upgraded, she suggested, although she cautioned people not to expect a “dramatic improvement”.

Meanwhile, the International Energy Agency in Paris forecast record oil demand this year, “with nearly half the gain from China following the lifting of its Covid restrictions” and a continued surge in production of jet fuel to meet the rapid recovery in global travel.

Even some of the most pessimistic voices of 2022 felt they needed to lighten their tone. Larry Summers, professor at the Harvard Kennedy School and a former US Treasury secretary, ended the year warning of recession and higher unemployment in the US.

On Friday, however, he told delegates that he felt “some exhilaration of relief.” Lower energy prices, a decline in populism, signs of lower inflation and China’s reopening would all help to avoid recessions in many economies across the world, he said. “We should feel better than a few months ago.”

Flies in the ointment

Yet for almost every celebration, there are some party poopers. And at Davos and beyond, it was central bankers asking for the music to be turned down.

While the improved outlook should be welcomed, they said, more robust spending patterns would complicate the continuing fight against inflation. Lael Brainard, vice chair of the Federal Reserve, urged “time and resolve” on high interest rates, while Christine Lagarde, European Central Bank president, said it was more important than ever to “stay the course”.

Their worry is that while headline inflation rates are falling and will fall quickly in 2023, core measures are not falling as fast and underlying inflationary pressures are still strong and could impede the return to price stability of inflation rates close to 2 per cent.

Business leaders were also far from naive about the likelihood that central bankers would have to work hard to get inflation durably lower in 2023.

Ziad Hindo, chief investment officer of the Ontario Teachers’ Pension Plan, which holds assets of about C$250bn, warned that an improving economy might increase prices further. “The China reopening is good news for the global economy, but the significant slowdown last year was a big reason why commodity prices softened, and now it’s back. It’s going to put pressure on inflation again,” he said.

Lagarde warned governments in Europe not to make her life harder by increasing subsidies to business and consumers, as Von der Leyen had promised to do. “We will do what is necessary [on interest rates]. We don’t want to be pushed into doing more than is necessary,” she said.

And while the immediate outlook was more positive than before, there was much less consensus at Davos on the longer-term questions of how to cement a better outlook for growth, living standards and sustainability.

Business and economic leaders welcomed progress in the corporate sector on the environment. Some were optimistic that medium-term growth could be driven by investments in clean energy. Tharman Shanmugaratnam, a senior minister in Singapore and longstanding official on the international economic stage, said that raising business investment into green technology had the potential to be “a huge fillip for growth”.

But others worried whether, in a world that is still likely to be dominated by large shocks, short-term pressures would again begin to dominate, limiting the green transition and the building of resilience into supply chains and other parts of businesses.

The best way to ensure consistent economic performance, said Summers, was to keep faith in the institutions that underpin the global economic order. “Better institutions that incentivise the mobilisation of resources better and more efficiently are more important than allocating more resources to any particular priority,” he said.

Another longer-term question was how serious China really is in pledging allegiance to that international economic order. Most business leaders listening to Liu, who is the administration’s most senior economic official, were persuaded by his message that he wanted to reconnect with advanced economies.

But Liu is expected to step down from his position this year and more jaded commentators were sceptical of a sea change. “Every time Chinese officials visit the Swiss mountain resort they say similar things,” said Mark Williams, chief Asia economist at Capital Economics, while “firms on the ground report that it’s getting harder to operate”.

The US’s motivations were also under heavy scrutiny. Was its ban on exporting technologically advanced microchips to China aimed at undermining that country’s economic progress? And was the real motivation of the Inflation Reduction Act a piece of pure protectionism to put America first at the expense of Europe?

With the ambitions of the world’s two largest economies unclear, senior figures warned that fracturing global trade flows and economic relationships could put a dampener on the economic mood this year — and beyond.

“How we handle the security of supply chains matters tremendously,” Georgieva said. “If we are like an elephant in a china shop and we trash the trade that has been an engine for growth for many decades, the cost [could be] up to 7 per cent loss of gross domestic product — $7tn.” Her message to leaders: “Keep the global economy integrated for the benefit of all of us.”