Favorable weather and high gas storage levels in Germany and most European countries indicate that the risk of a serious energy crisis in the old continent is receding, which has positively impacted the . That combination of factors could lead the German index toward all-time highs in the next few months. There is still a long way to go, but the signs are beginning to emerge.

Inflation in Germany and the Eurozone in Line With Forecasts

Inflation data published on Tuesday and Wednesday in and the were in line with forecasts. It is critical for the downtrend to continue.

Inflation in Germany and Eurozone

Gas prices have declined significantly below 100 euros in Europe, as reflected in the price of contracts. This makes it more likely for the downtrend in inflation to continue in the coming months.

Currently at 60 euros per MWh, the prices are at lower levels than on the day of Russia’s invasion of Ukraine. 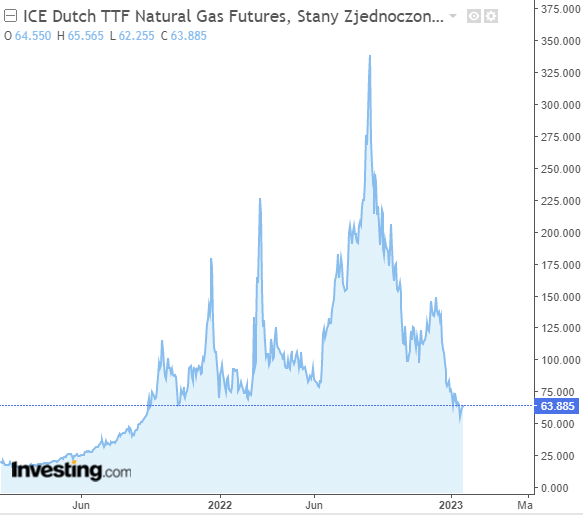 Recently, the German head of the Federal Network Agency announced that Germany would survive this winter from an energy standpoint, primarily through diversification and the expansion of LNG terminals.

However, it should be remembered that despite a significant reduction in gas imports from Russia, it still flows to Germany via the Yamal pipeline. It was still 32.5 bcm in 2022 (down from 93 bcm in 2021), which could still be leverage for the Russian side, especially now that there is a discussion about the transfer of Leopard tanks to the Ukrainian side.

What Will ECB’s Next Steps Be?

Traditionally, one of the critical factors influencing European financial markets is the European Central Bank. After the last meeting, we witnessed a more hawkish stance, where the ECB announced a more aggressive path of increases. If this stance is reaffirmed at the upcoming meeting, this could put the brakes on the current bull rally on Germany’s premier stock index.

Sustained tightening by the ECB is possible, as inflation is still very much above the target. Additionally, an abrupt change in the narrative in the next meeting will hurt the bank’s credibility.

Dax Rallies at the Beginning of the Year

Since the beginning of the year, the German DAX has continued to move upward after a correction in December. As of this writing, the index is fighting to maintain the psychological 15.000 level. 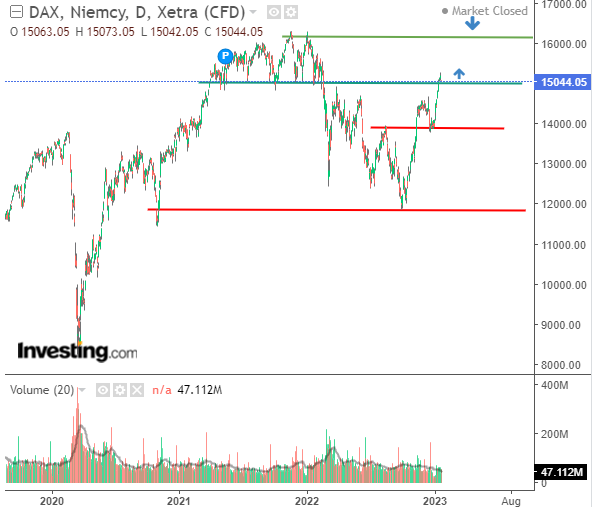 The target area invariably remains the all-time high, slightly above 16000 points. At the same time, a local correction looms due to the almost vertical nature of the rally. In such a situation, the first target should be the region of 14700 points, where local support is located. The maximum range for a possible rebound seems to be the psychological barrier of 14000 points.

It is worth paying attention to what will happen during the upcoming ECB meeting, which will be held on Feb. 2, the day after the Fed’s decision.

Disclaimer: The author does not own any of the securities mentioned in this article.