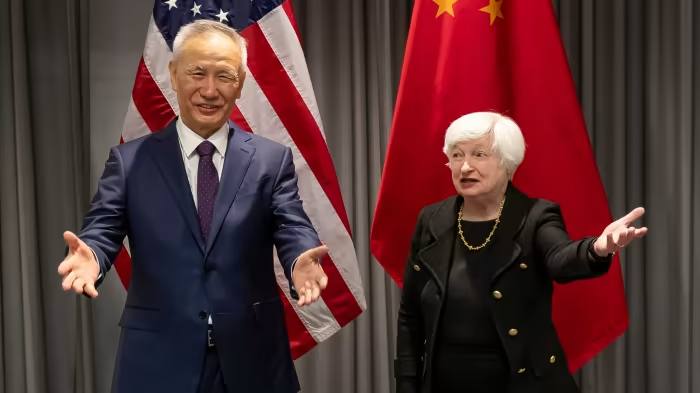 China has said it would welcome a visit by Janet Yellen this year after the US Treasury secretary met vice-premier Liu He in Zurich, marking the first top level economic meeting between the powers since US president Joe Biden took office.

The meeting, which comes as US-China relations remain fraught over issues from Taiwan to trade and technology, was described by both sides as “candid”. In separate statements, both sides sought to ease concerns about a further deterioration in ties between the world’s two largest economies.

China’s state-run news agency Xinhua said the two officials agreed in a three-hour meeting that their economic and trade teams would “continue to maintain communication at all levels” and that Beijing would welcome a visit from Yellen “at a suitable time this year”.

The Treasury said both sides agreed that it was “important for the functioning of the global economy to further enhance communication around macroeconomic and financial issues”. It added that Yellen “looks forward to travelling to China” and to welcoming her Chinese counterparts in the US.

The Zurich talks comes two months after Biden and President Xi Jinping held their first in-person meeting as leaders at the G20 in Bali. The two tried to halt the deterioration in relations that reached a new low when China held huge military exercises around Taiwan in August.

1. BoJ keeps yield control measures The Bank of Japan has defied market pressure and left its yield curve control measures unchanged, sending the yen sharply lower and stocks higher as it stuck to a core pillar of its ultra-loose monetary policy. The decision follows weeks of turmoil in the Japanese government bond market, during which yields surged.

2. Shein discussing fundraising that would slash valuation Shein is in talks to raise up to $3bn in a move that would lead to the Chinese fast-fashion group accepting a vastly reduced valuation of $64bn, down more than a third from its peak following a downturn that has led investors to re-evaluate frothy tech start-up valuations.

3. Thiel’s fund wound down bitcoin bet before market crash Founders Fund, the venture capital firm co-founded by billionaire Peter Thiel, closed almost all of its eight-year bet on cryptocurrencies shortly before the market began to crash last year, generating about $1.8bn in returns.

4. China to launch state-owned ride-hailing app The app, called Strong Nation Transport, will initially target Communist party members and employees of government-owned enterprises, in a challenge to the country’s reigning market leader Didi. State media yesterday reported that the app will be backed by the transport ministry and other government agencies.

5. Behind Musk’s ‘funding secured’ tweet Elon Musk made the “split-second decision” to tweet that he had “funding secured” to take Tesla private in 2018 after seeing a story in the Financial Times, a lawyer for the billionaire told jurors in San Francisco. Musk sent the message while in a car on the way to an airport after he read a report in the FT detailing how Saudi Arabia’s Public Investment Fund had quietly acquired a $2bn stake in the electric vehicle group, a lawyer for Musk and Tesla said.

Greta Thunberg reportedly meets IEA executive director The Swedish activist is set to meet today with Fatih Birol, head of the International Energy Agency, in Davos on the sidelines of the World Economic Forum (Reuters).

European Central Bank minutes The central bank will publish the minutes of its December meeting today and various central bankers will be discussing regional and global economics at Davos.

The World Economic Forum continues. Tune in to the Davos Daily Show, hosted by the FT’s Andrew Hill, from 12pm GMT January 17-19. Register here for free.

Can Apple decouple from China? Apple is facing political, strategic and investor pressure to cut its manufacturing reliance on China. But if the relationship is untenable, it is also near-unbreakable. As the tech giant increasingly finds itself beholden to America’s biggest geopolitical rival, the question is whether diversification is even possible.

Bollywood blockbuster meets India’s culture wars Pathaan, the big-budget Bollywood film out next week, marks the grand return of India’s biggest actor: Shah Rukh Khan. But it will also be a test for Khan and Bollywood following a run of box office flops and Khan becoming a target for harassment from hardline Hindu groups.

Davos: There’s life in global capitalism yet The World Economic Forum in Davos has been the meeting place and cheerleader for global capitalism. While some argue this cause is dead, rumours of the demise of international business and trade have been exaggerated, writes Martin Wolf.

Disney activist investor focuses on Fox deal Nelson Peltz, the activist investor who is trying to force his way on to Disney’s board, has fixated on a $71bn deal that saw the entertainment company buy Fox’s movies and television business. Peltz blames the deal for what he calls Disney’s “balance sheet from hell”, saddling it with extra debt and preventing the company from returning cash to investors.

Chinese snooker players charged in match-fixing probe Ten Chinese professional snooker players have been charged by the game’s governing body as part of an investigation into match fixing, in an embarrassing episode that threatens the sport’s standing in its most important growth market.

Beef is a serious business in South Korea: local butchers typically identify 120 different cuts (as opposed to the western 20 or 30) that run from the tenderloin to obscure parts of the tail. Hanwoo beef is considered the most luxurious of its offerings, but although renowned in South Korea it is less known abroad. Does Hanwoo stand to be the next Wagyu steak?

Why You Should Stay Clear of Market Forecasts