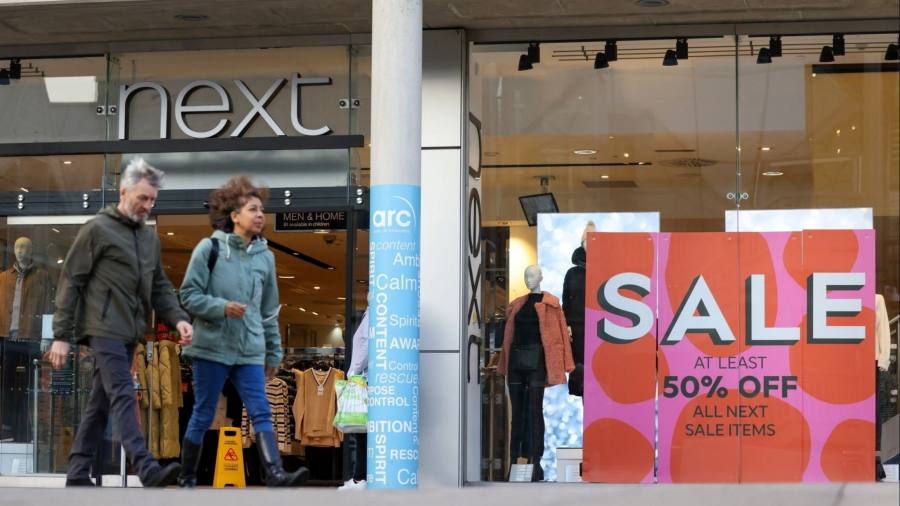 Marks and Spencer’s announcement this morning of 20 new stores is a vote of confidence in Britain’s beleaguered high streets after their battering during the pandemic.

The £480mn investment, which will create 3,400 new jobs, makes bricks and mortar locations an important part of the company’s future and “serves as a competitive advantage for how customers want to shop today”. M&S will accelerate plans to close older stores and increase the number of food halls, as well as expanding digital services and click-and-collect.

The news comes amid better than expected results from the country’s big retail chains in the crucial fourth-quarter trading period, which showed the country’s shoppers flocking back to high streets despite rising prices and the pressures of the cost of living crisis.

Next, JD Sports and B&M have all upgraded profit forecasts after a successful Christmas, while M&S reported its largest share of the clothing market in eight years as well as improved sales in its food division.

The King’s grocer Fortnum & Mason added to the positive comments emanating from the retail sector by announcing today that it had returned to profit. Fortnum’s said it was also likely to benefit from a range of merchandise launching ahead of the coronation of King Charles, which it predicts will be popular with international shoppers.

“The channel shift [back to stores] has been a benefit for the biggest retailers,” said Lisa Hooker, head of UK consumer markets at PwC. “The online share of sales is now only a year ahead of where it would probably have been had Covid never happened.” Shop sales also generally mean higher profit margins than online because the customer bears the cost of “last mile” transport and the running costs of stores are largely fixed.

But challenges lie ahead for the sector. A large rise in the UK’s statutory minimum wage in April, higher energy costs and questions over whether inflation has peaked all remain challenges. But factory gate prices and freight rates are falling and big chains such as Next will also benefit from changes to business rates announced in the Autumn Statement.

The Lex column offers a note of caution for investors, arguing that frothy festive trading updates were not evidence that consumers were splashing out but that they were simply “swallowing last year’s inflation pill so as not to cancel Christmas”. Despite paying more at the till, Lex points out, they still brought home less than last year.

In the UK it’s a big week for Brexit (yes, it’s not done yet), with talks about resolving the impasse over Northern Ireland’s trade relations and the government’s proposed bonfire of thousands of EU laws.

A think-tank report with a foreword from a former Tory minister calls for the current UK government to prioritise the revival of manufacturing to reduce regional disparities after the shortlived Liz Truss administration ditched a planned industrial strategy.

Russian export earnings from fertiliser soared 70 per cent last year as prices increased after its invasion of Ukraine. Food and fertiliser are exempt from western sanctions to protect food security, especially for poorer countries. Russian grain shipments have also returned to prewar levels.

China’s fourth-quarter and full-year GDP figures are published tomorrow and are likely to again fall short of government growth targets. Here are five things to watch. The FT editorial board says China’s reopening has crucial implications for growth and inflation around world. Hong Kong is also hoping reopening can help it retain its status as a global financial centre.

In the meantime, wealthy Chinese people are increasingly viewing Singapore as a safe long-term home for their money because of its political and economic stability and rising status as Asia’s financial hub, as our Big Read explains.

Is the golden age of shale energy, which “vaulted the US back to the top of the table in terms of geopolitical significance”, now over? And if so, what does it mean for the rest of the world? Here’s another detailed Big Read.

Peru declared a state of emergency in the capital Lima and three other regions as protests against President Dina Boluarte spread. Dozens of people are now dead as a result of the unrest, which was triggered by the ousting and arrest of leftist former president Pedro Castillo in early December.

Bain Capital is preparing to list Virgin Australia, one of the most high-profile company collapses of the pandemic, as the aviation sector rebounds. Aircraft leasing company Avolon forecast a return to profitability for the global airline industry this year and that air traffic would hit pre-pandemic levels by June. An emissions-free start up called for more subsidies to encourage the switch to electric-powered planes.

Microsoft’s potential $10bn investment in research group OpenAI, which last month grabbed headlines with the launch of its ChatGPT system, could become the defining deal for a new era of artificial intelligence, changing the way people interact with computers.

Social media platforms are expecting user numbers to fall from age checks in the UK’s online safety bill, which goes through its final stages in parliament this week. Culture secretary Michelle Donelan is considering making tech bosses criminally liable if they fail to protect children online.

In countries like China and Japan, demographic changes mean a new age of mass loneliness is dawning. Asia business editor Leo Lewis ponders what this means for investment strategies.

The World of Work

A growing number of UK companies are changing their youth-first approach and targeting over 50s for key roles, writes economics correspondent Delphine Strauss.

South Korea has the worst gender pay gap among OECD countries for the 26th year in a row. Just 55 per cent of the country’s women are in the workforce, compared with 74 per cent for men, even though they have the highest educational attainment among their peer nations.

Few businesses disclose the pay of individuals — and for good reason, argues the Lex column. Apart from causing resentment, transparency has the effect of holding back overall worker income, it says.

Will the office of the future look more like a home, dressed down and filled with dogs and lounges? Or more post-industrial and nightclubby, all steel beams and ducts? Architecture critic Edwin Heathcote seeks clues from the past.

And what kind of add-ons might be available? Yoga, nail bars and beehives are some of those on offer at City of London law firms as they try to retain and attract staff. One partner said: “If I hear the phrase ‘Ottolenghi-style brasserie’ one more time I might kill someone.”

A laser beam pointing into the sky could divert lightning strikes, in what scientists have said was the most significant advance in lightning protection technology since Benjamin Franklin invented the metal conducting rod in the mid-18th century.

General Electric Stock: The Sum of All Parts Strategy Is Paying Off