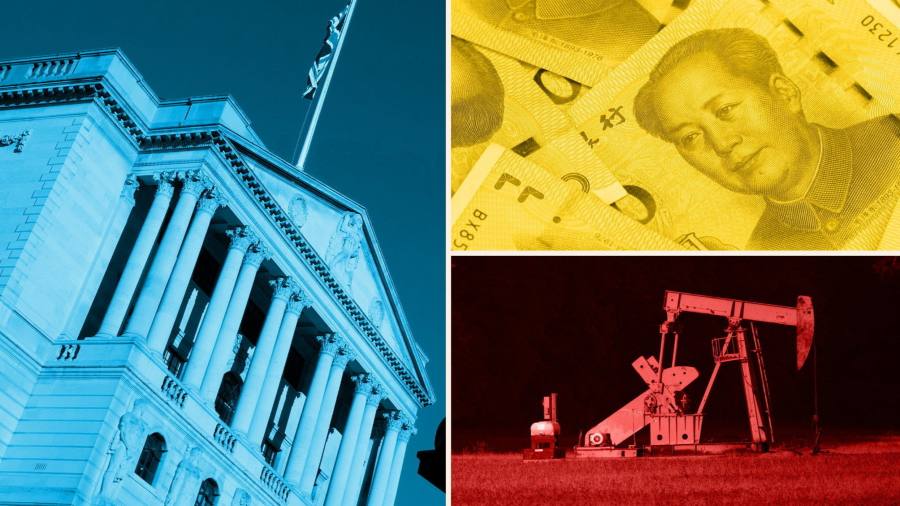 Will UK inflation data show the BoE’s strategy is paying off?


Will the UK’s December inflation data show the BoE’s tightening policy is paying off?

UK inflation is expected to have eased again in December, following the trend in the eurozone and US.

Economists polled by Reuters forecast the annual rate of the UK consumer price index, due to be released on Wednesday, to have declined to 10.6 per cent in December. That is a touch lower than the 10.7 per cent in November and would mark the second consecutive slowdown from a 41-year peak of 11.1 per cent in October.

Samuel Tombs, economist at Pantheon Macroeconomics, expects the decline in the headline figure to be partially driven by a drop in motor fuel inflation, but also by some further easing in core inflation, which strips out the more volatile energy and food prices. These trends would “would encourage the monetary policy committee to end its tightening cycle soon”, he said.

In the US, December’s consumer inflation slowed to its lowest level in more than a year and dropped more than expected in the eurozone on the back of lower energy price growth.

Susannah Streeter, markets analyst at Hargreaves Lansdown, said she hoped that UK inflation would mirror those movements but warned that “the tight jobs market and relentless rise in food prices are likely to mean it stays stickier for longer”.

Wage growth is still rising at a steady pace and is expected to continue, according to a closely watched survey by the Bank of England. As a result, markets are pricing in a half percentage point rate increase when the Monetary Policy Committee meets on February 2.

The bank rate rose from a historic low of 0.1 per cent in November 2021 to the current 3.5 per cent, with a peak expected at just above 4 per cent this year. Valentina Romei

What will China’s GDP reading reveal about the health of the economy?

Recent weeks have seen a flurry of “reopening rallies” for commodities on the back of expectations that the recent end of China’s zero-Covid policy will herald a massive boost for economic activity. But high-profile data released this week, including gross domestic product figures out on Tuesday, could give investors pause.

Economists at Goldman Sachs have forecast year-on-year growth for China of just 1.7 per cent in the fourth quarter of last year, implying full-year growth of only 2.6 per cent. This reflects both the continued drag from Covid-19 curbs early in the period, as well as the negative impact of ending those measures, which led to hundreds of millions of infections in a matter of weeks.

But an earlier signal on the current state of China’s economic health will arrive on Monday, when the country’s central bank announces its monthly decision on the one-year medium-term lending facility rate, which acts as the floor for the country’s benchmark rate. With most economists expecting the People’s Bank of China to stand pat, any move to ease by the bank could catch markets by surprise.

Some analysts have already slashed their China growth estimates for the first quarter. Oxford Economics recently cut its forecast to 2 per cent, down from 3.5 per cent, owing to concerns about domestic demand.

“Confidence and incomes are too frail for a quick recovery,” said Louise Loo, senior economist at Oxford Economics. “And though authorities have turned encouragingly pro-growth, there are meaningful constraints to further policy easing.” Hudson Lockett

What are the chances of an oil rally this year?

Oil is at something of a crossroads. After starting the year on the back foot, with Brent crude falling below $80 a barrel in the early days of the new year to hit lows not seen since the invasion of Ukraine, crude has risen to finish this week close to $85 a barrel.

There is a clear divide in the market. Some see signs of a demand-sapping recession capping crude’s ability to rally this year. Russian crude oil export volumes have also broadly held up, despite western sanctions getting tougher in December, so there’s not yet a significant deficit in the market.

But there are clearly those who see oil’s recent pullback as a buying opportunity, with the market at risk of becoming complacent following a volatile 12 months.

Further EU-imposed sanctions are going to bar the import of Russian refined fuels in February. Opec — which publishes its monthly oil market report on Tuesday — and its allies have indicated their willingness to stop prices falling too far.

China’s reopening and the end of its strict zero-Covid policy should eventually provide a boost to demand growth this year. US releases of strategic oil reserves, which helped calm the market following Russia’s invasion, have ended. Even the world economy could be stronger than once anticipated in 2023, with the natural-gas crisis in Europe calming slightly, thanks to a mild winter.

Analysts at Redburn have said the largest oil companies could be a buy.

“We remain reluctant to jump on the supercycles bandwagon, but flatlining Opec output, stalling shale activity and resilient demand have combined to make us incrementally more positive on oil,” Redburn said. “With the [oil] majors still trading on close to all-time low multiples, the risk-reward continues to look attractive.” David Sheppard

‘Nonsense’ That Biden Was Unaware of Classified Docs

So much fintech M&A • TechCrunch