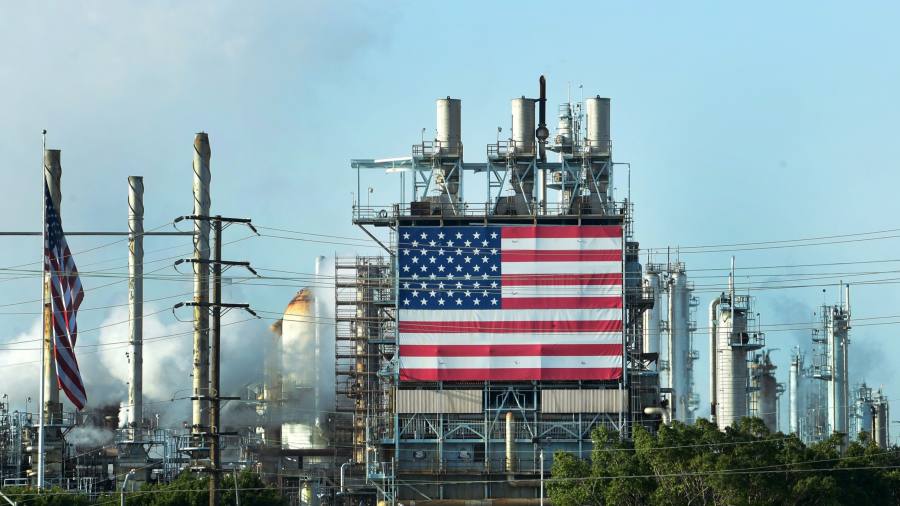 Welcome back to Energy Source. Balmy weather has played a central role in helping Europe avoid a winter energy supply crisis and tempering sky-high natural gas and electricity prices. Record-high renewable power generation has also helped of late. The FT’s David Sheppard reported yesterday that wind power has consistently generated about half of the UK’s power over the past week and hit record output on Tuesday. Blustery weather and new turbines have helped reduce fossil fuel’s share of the UK’s electricity mix to less than 15 per cent over the past week.

In today’s newsletter we look at the fresh energy fights brewing in Washington and the return of Venezuelan crude to the US. In Data Drill, Amanda looks at new US government forecasts of record-high global oil consumption in 2024 — no sign of peak oil yet.

A quick programming note: due to the Martin Luther King Day holiday here in the US, the next edition of Energy Source will land in your inbox on Wednesday instead of Tuesday. Thanks for reading! — Justin

Oil industry gears up for new fights in Washington

The American Petroleum Institute’s boss Mike Sommers sought to keep the pressure on president Joe Biden at its latest annual event yesterday even as fossil fuel prices have dropped, which has helped ease inflationary concerns and the threat of political blowback from high prices at the pump.

Sommers argued the energy crisis was not over and put Europe forward as a cautionary tale for a region that “chose not to develop their own resources” and instead relied on “hostile” imports. “Our friends in Europe learned the hard way that energy security is national security.”

1. Getting cash back into fossil fuels

The Biden administration has repeatedly called on the oil industry to put the cash windfall from high oil and gas prices back into the ground to accelerate output growth, rather than into the pockets of investors in the form of dividends and buybacks to lift their share prices. Amos Hochstein, Biden’s top international energy adviser, called it “un-American” that companies such as ExxonMobil were paying out huge dividends instead of investing in new output.

But Sommers blamed “a barrage of negative rhetoric levelled at American energy and fuel producers”, for companies’ unwillingness to invest in new output.

“If the government signals support for American energy, it would boost investor confidence in future projects to unleash needed supplies,” Sommers argued.

The war over words is closely tied to a separate fight that is coming over environmental, social and governance investing. Republicans in Washington plan to use their control over the House of Representatives to launch an attack on the ESG industry, arguing that it is undermining the American fossil fuel industry.

In a preview of that fight, Sommers argued that ESG-minded investors should actually be piling into the American oil and gas industry. Shale gas had “done more to improve our environmental footprint than just about any other industry in the world” by undermining the coal industry, he said.

Even amid the ongoing energy crisis, investors have urged oil and gas producers to put cash towards shareholder returns instead of new long-range projects, partly over worries that government action on climate change will undermine future demand. The industry and its allies in Congress think they spy an opportunity to reverse that trend.

The API is not giving up on reforms to the way energy projects are permitted in the US even after industry-ally Joe Manchin, the Democratic senator from West Virginia, repeatedly tried and failed to get permitting reform legislation passed in recent months.

Expect the influential industry lobby group to lean on Republicans and friendly Democrats to make a renewed push on the issue this year.

It is one of the rare areas where the oil industry and White House — as well as many clean energy developers — are on the same page. Wind and solar projects suffer the same delays from extensive environmental reviews and legal challenges as oil and gas pipelines and export facilities, and the Biden administration is worried they will undermine its clean energy goals.

In backing Manchin’s permitting reform, Biden has signalled he is open to a compromise that sees easier permitting for oil and gas projects if it means clean energy projects can also be built. However, the president will have to overcome staunch opposition from progressive Democrat lawmakers and activists that have shown little willingness to make the same compromise.

“Both parties know the importance of getting permitting reform done. It’s time to do it,” Sommers said. (Justin Jacobs)

Venezuelan crude returns to the US

Venezuelan crude is headed to American shores for the first time since 2019 after the Biden administration eased sanctions on the Latin American oil producer in December.

Two cargoes of Venezuelan oil will land at Chevron’s refinery in Pascagoula, Mississippi, in coming days, according to a person familiar with the company’s operations and shipping data. Chevron is also shipping a cargo of diluent, a crucial input that enables the production of Venezuela’s ultra-heavy oil, into the country, a sign that the American supermajor is starting to increase operations that had been all but shuttered due to Washington’s sanctions.

What does it mean?

Do not expect Chevron to suddenly start throwing huge amounts of cash at its Venezuelan business, which has atrophied under the sanctions and Venezuela’s economic crisis. Sources familiar with the company’s plans say it will remain focused for the next couple years on keeping oil flowing at existing levels as it recoups about $4bn of debt it has accrued in recent years. Its projects were pumping about 160,000 barrels a day when sanctions came into force in 2019.

But Venezuelan crude sailing into the US once again marks a new stage in the countries’ fraught relations. Venezuelan president Nicolás Maduro has made it clear he wants further easing of sanctions to re-establish what was once a lucrative oil trade for the country and spur much-needed investment in its moribund industry. But the Biden administration will push for more political reforms before that happens. (Justin Jacobs)

Global petroleum consumption will reach record highs in 2024, says the US Energy Information Administration in a new forecast. The EIA predicts demand for liquid fuels will reach 102.2mn barrels per day in 2024, largely driven by growth in non-OECD countries such as China and India.

Greater oil production in the US and non-Opec countries like Canada and Brazil will help keep a lid on prices. The EIA expects the US will account for 60 per cent of production growth in 2024. Brent crude prices are expected to average $77.57/barrel in 2024, a 23 per cent decrease from 2022.

The EIA’s projections for US production highlight the contradictions of Joe Biden’s climate agenda as he tries to wean the country off fossil fuels while at the same time keeping energy prices low for consumers.

Trump Explains Use of ‘Swooned Her’