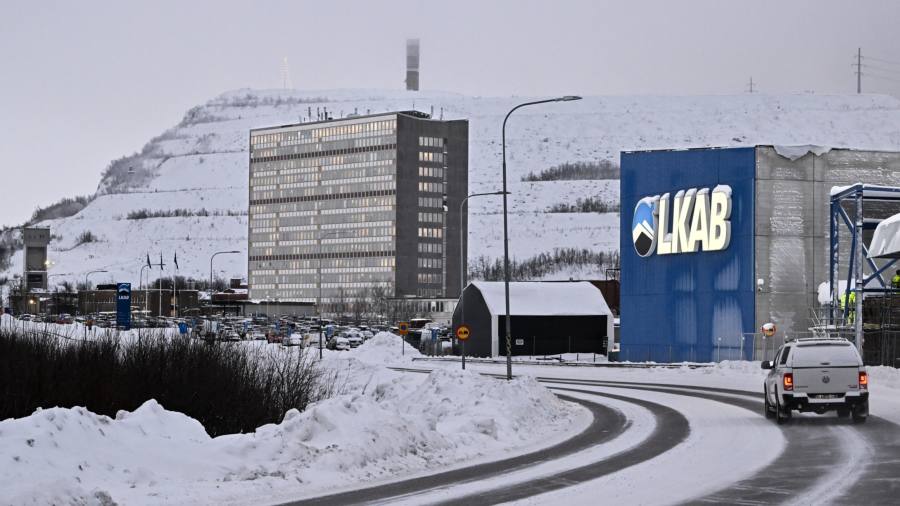 The deposit, dubbed Per Geijer, is located north of the Arctic Circle in Sweden’s province of Lapland and contains more than 1mn tonnes of rare earth oxides — the largest known deposit of its kind in Europe, the company said.

Speaking at the company’s existing iron ore mine in Kiruna — itself the largest in the EU — chief executive Jan Moström said it would take several more years to establish what the deposit contained. “We have ongoing exploration activities in this deposit, which means for us it’s open, it’s not closed — we don’t actually know how big it is,” he added in a press conference.

Moström stressed the regulatory challenges lying ahead as the company seeks to exploit the discovery. “If we really want to pursue the green transition we must find ways to speed up this process quite substantially.”

Rare earths deposits are — contrary to their name — fairly common across different geographies, but it is the extraction of the minerals that is the most challenging part, because of complex processing and intensive environmental effects.

It would take 10 to 15 years before the raw materials could be delivered to the market, Moström said, but if permitting processes at a Swedish and EU level can be accelerated this timescale could be cut by upwards of 50 per cent. The company plans to submit an application for an exploitation concession this year.

At present more than 80 per cent of the world’s rare earths processing capacity is in China and the EU predicts that demand for the metals used in electric car motors and wind turbines will increase fivefold by 2030.

The EU has put the drive for greater self-sufficiency in raw materials at the top of its agenda as it seeks to curb its reliance on China and Russia and shore up its ambitions to boost homegrown green technologies including wind and car batteries.

The European Commission is working on plans to lower regulatory barriers to mining and production of critical materials such as lithium, cobalt and graphite, needed for wind farms, solar panels and electric vehicles.

The work has taken on greater urgency amid a stand-off with the US over its $369bn Inflation Reduction Act, which offers huge industrial subsidies aimed at boosting green technologies in the US.

The US scheme has triggered fears of an exodus of green investment from the EU across the Atlantic, amplified this week by Belgian prime minister Alexander De Croo, who complained of “aggressive” US efforts to woo EU companies.

Some member states are sceptical about how far the EU can go towards lowering its reliance on imported raw and refined materials given the regulatory obstacles, stressing the need to stick with a free-trade agenda aimed at unlocking deals with mineral-rich continents such as South America.

Valdis Dombrovskis, trade commissioner, has emphasised the need to widen the union’s network of free trade agreements, pointing to Chile, and its vast stocks of lithium, as the EU seeks to sign a deal updating a 2002 agreement. The EU also wants an agreement with Australia, another raw materials powerhouse, by next summer.

“Having a wide network of FTAs is a source of diversification and thus a source of resilience,” Dombrovskis told the Financial Times last year.

Northern Sweden is home to one of the biggest green industrialisation projects in the world as several large battery and steel factories tap the region’s surplus of renewable energy. The resulting rush of investments has turned the region into a boom area as companies such as Northvolt, Facebook and H2 Green Steel have moved there.

But the amount of power needed for the projects is vast: LKAB’s plans to make carbon-free sponge iron needed for steel will alone take up one-third of Sweden’s electricity resources.

Will Major Banks’ Earnings Offer Clues to a Soft Landing or Harder Recession?