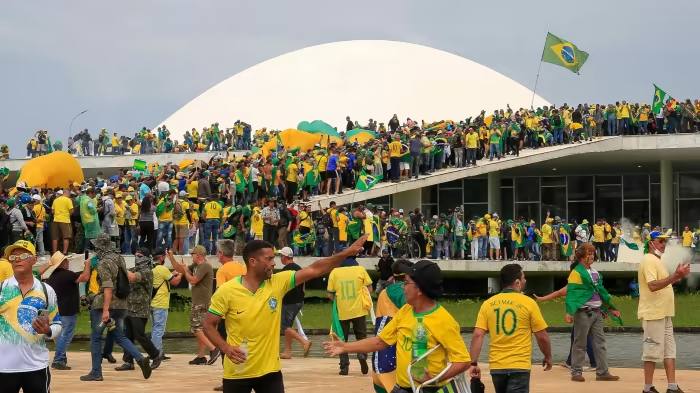 Social media footage earlier showed crowds vandalising the interiors of the three institutions in Brasília in scenes reminiscent of the US Capitol invasion two years ago by supporters of ex-president Donald Trump.

Clad in the yellow and green of the Brazilian flag, the protesters demanded Lula’s election victory be overturned, that the leftwinger be imprisoned and for a military coup d’état. Police said 300 people were arrested.

Although the government buildings were unoccupied and Congress not in session, the breaches are likely to raise doubts about the security of Brazil’s political and judicial institutions.

The incident also presents tough choices for Lula, who took the presidency just a week ago promising to unite the nation but will be under pressure to crack down on Bolsonaro’s radical supporters.

Thank you for reading FirstFT Europe/Africa. I will be taking over this newsletter. Please feel free to send feedback to firstft@ft.com — Tee

1. Goldman preparing to cut 3,200 jobs to rein in costs Goldman Sachs will begin cutting up to 3,200 jobs within days as it confronts a slowdown in investment banking and pars back its consumer bank. The cuts are some of the deepest Goldman has made in its recent history and more drastic than what many peers currently have planned.

2. US military deepens ties with Asian allies against China threat The US and Japanese armed forces are rapidly integrating their command structure and scaling up combined operations to prepare for a possible conflict with China over Taiwan, emulating the groundwork that enabled western countries to support Ukraine’s resistance to Russia, the top Marine Corps general in Japan told the Financial Times.

3. Health unions warn Sunak of fresh strikes unless pay offer boosted Leaders of the Royal College of Nursing and three ambulance workers’ unions — some of whom are set to strike on Wednesday — said yesterday that without a fresh pay offer for the current year, any talks today would be in vain. The talks were proposed by UK prime minister Rishi Sunak after weeks of deadlock between ministers and unions.

4. Macron prepares for fight over French pensions reform French president Emmanuel Macron will push ahead with his long-promised and unpopular plan to overhaul his country’s costly pensions system. The draft law, which would require citizens to work two or three years past the current retirement age of 62 to qualify for a full pension, could renew street protests and a backlash from political opponents.

5. Women pass 40% mark on European financial services boards An EY report said women made up 42 per cent of seats in boardrooms among financial services firms as of January, up from 37 per cent in June. The data underline the significant road ahead for employers seeking to improve female representation, which campaigners said was only part of the process for a more equitable financial sector.

Returning to its regular January schedule, the World Economic Forum’s 2023 annual meeting will bring together global leaders in Switzerland next week. Join FT Live at Davos for in-person and digital events January 16-20. View the events and register for free here.

North Korea’s evolving nuclear threat In spite of tough international sanctions and extreme self-imposed isolation during the coronavirus pandemic, experts warn that North Korea has made such rapid progress with its military goals that existing arrangements for the defence of South Korea, Japan and the US could soon be rendered obsolete.

“I think there is a serious risk that a North Korean crisis could erupt while we are all focused on China potentially invading Taiwan.” — Sue Mi Terry, Wilson Center Asia programme director

From obscurity to a $240bn valuation in 3 years International Holding Company’s extraordinary transformation has largely gone unnoticed outside the United Arab Emirates — and is little understood, even by bankers based in the region. IHC’s chief executive insists there are simple reasons for the company’s growth, but his account explains only part of the story.

Ukrainian engineers’ fight to maintain the power grid As Moscow has launched relentless volleys of cruise missiles and drones that aim to destroy Ukraine’s electricity grid and plunge millions of civilians into freezing winter darkness, Ukraine has developed a three-pronged strategy to keep the lights on.

2023 investor guide: from peak dollar to better TV The end of the era of easy money and return of inflation shook up the global financial system last year, clearing the way for new winners to emerge. Ruchir Sharma picks the 10 trends that will shape 2023.

Southwest fiasco shows hyper-efficiency is bad business The budget carrier stranded thousands of passengers for the last 10 days of 2022, showing that management by numbers has gone too far, writes Rana Foroohar.

Have your chakras aligned in a sound- and light-therapy chamber, close yourself away in a private Longevity Garden for 75 minutes to exfoliate yourself with volcanic pumice stones and lounge on an infrared bed shaded by banana trees. Explore these four healing hotels for 2023.