Looking for the Dogs of the Dow, 2023 edition? You came to the right place.

We’ll explore these 10 blue-chip dividend bargains in a moment. Collectively, they are yielding 4.5%! But first, a quick recap of the strategy and homage to its 2022 “mini-miracle.”

Last year was a dumpster fire for most mainstream investors. The market at large dropped 18%. “Safe” bond funds shed 25%, 30% or more. Yikes.

But the dogs ran. Not only did they outpace the market, but they delivered positive gains!

Who were these income greyhounds? And what’s the lineup for ’23? First, a refresher on this simple three-step strategy:

This is rooted in an “old-school” value approach that views big dividends as a sign that high-quality blue chips are undervalued. And with just three simple steps, executed just once per year, we can create our own Dow Dogs ETF (minus the annual fees).

Of course, you and I know that high yields don’t mean a stock is a value—sometimes they just mean a stock is cheap. And for a few recent years, performance bore that out. The Dogs strategy showed cracks in 2019, really fell off the rails in 2020 and

But just like that, in a disastrous 2022, the Dogs stood up when just about everything—including the industrial average itself—fell down. The Dow Dogs, as mentioned, finished in the green on a total-return basis while the S&P 500 lost 18%. It even topped the Dow itself by a comfortable margin. 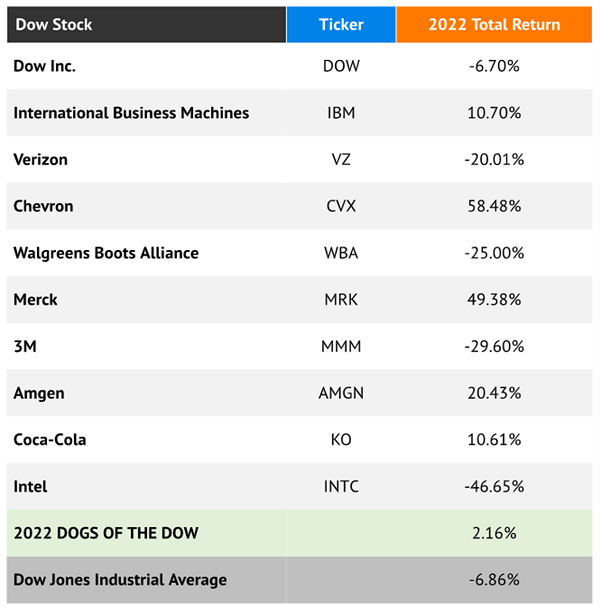 And interestingly, we have eight dogs returning for another race this year. Only two of 222’s Dogs—Coca-Cola (NYSE:) and Merck (NYSE:)—cycled out, replaced by JPMorgan Chase (NYSE:) and 2021 Dog Cisco Systems (NASDAQ:). 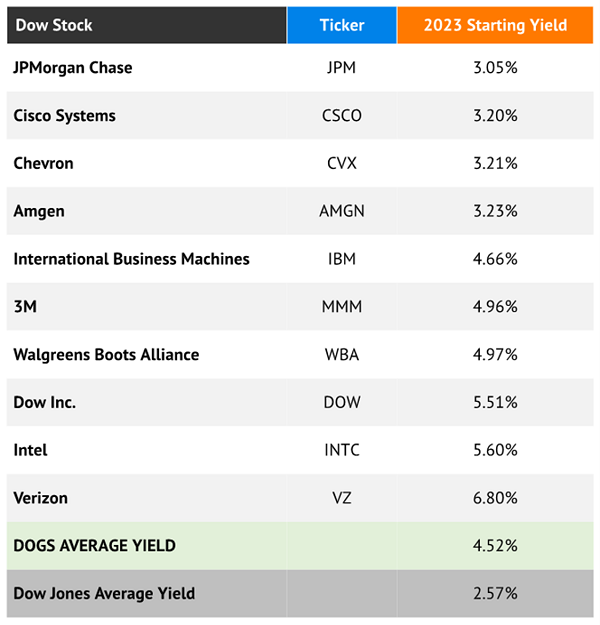 So, should we follow the Dogs of the Dow strategy through another potentially difficult year?

Possibly, but not for the yield alone. We can’t retire off of 4.5% in annual yield—a “perfect” amount of portfolio income is closer to 7%. Even if we put a million bucks to work on the Dogs, we’d still only be netting $45,000 a year. So we need upside potential too.

Can they give us that? Let’s decide by looking at five notable 2023 Dogs:

The Skinny: Most years, a double-digit loss would be noteworthy, butJPMorgan’s (NYSE:) 12% decline, on a total-return basis, was utterly unremarkable, sitting just under the financial sector’s 11% loss and outpacing the broader market. While skyrocketing interest rates were a boon to margins, investment banking revenues cratered.

What Has to Go Right: Forget JPM: The entire banking sector would benefit if the economy managed to avoid a recession while interest rates remain elevated. Otherwise, JPMorgan shares could rebound in 2023 if the bank sees more of the same lending growth it enjoyed in 2022, and if the capital markets environment firms up from its current weak state. Strong financials and shrewd management bode well for JPM not just in 2023, but for the long term.

The Skinny: Cisco Systems is one of my favorite “dividend magnet” examples, with price increases that, over time, keep up almost perfectly with its payout hikes. 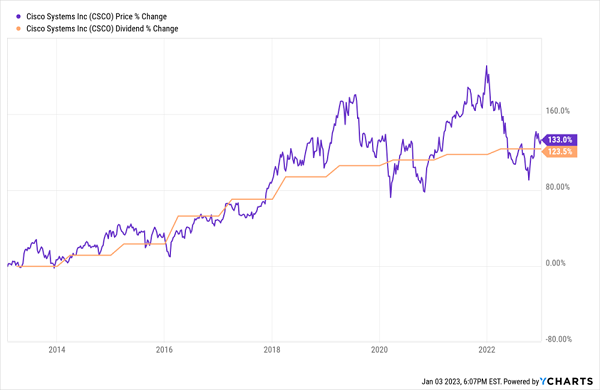 Emphasis on “over time.” It doesn’t perfectly track over the short term, and 2022 was a great example, with shares losing 22% across the year despite the dividend heading higher. CSCO was caught up in the larger tech-selloff tide, though it wasn’t entirely unwarranted: revenues decelerated across the first half of 2022, which makes up the back half of its odd fiscal year (which ended in July).

What Has to Go Right: Continued momentum from its fiscal Q1 (which ended in October), which saw top-line growth regain speed and set a new quarterly revenue record. But particularly, more progress toward shifting away from hardware and toward software should help keep recurring revenues trending upward, which in turn would help calm investors worried about a still saggy macroeconomic outlook. Also encouraging: CSCO raised both sales and adjusted profit forecasts for its fiscal 2023.

The Skinny: Healthcare was one of the best-performing sectors in 2022 and still closed the year slightly in the red. Not so with Amgen (NASDAQ:), which produced a 20% total return amid multiple earnings beats and optimism about the biotech’s trial-stage weight-loss drug, AMG 133.

A Healthy Year for AMGN Shares 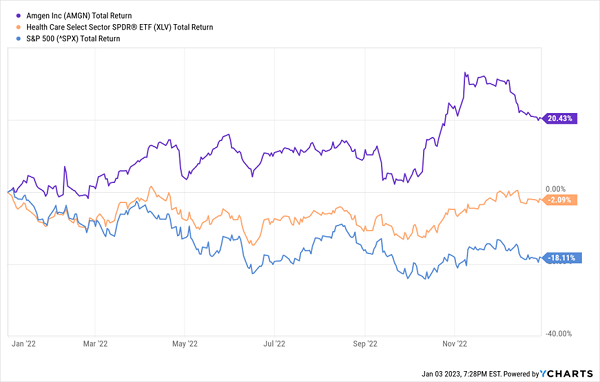 What Has to Go Right: Investors’ focus will at least in part be on M&A. In December, Amgen said it would dole out $27.8 billion in cash to acquire Horizon Pharmaceuticals (HZNP). Horizon, which has several approved products but a much deeper pipeline, focuses on inflammatory conditions and rare diseases. Thing is, the deal isn’t expected to be accretive to earnings until 2024. More material to Amgen’s 2023 performance is the long-awaited launch of its Humira biosimilar, Amjevita, expected in late January.

The Skinny: 3M Company(NYSE:) underperformed the market—by a lot—for the fourth straight year, hemorrhaging 30% in 2022. What went wrong? Well, a strong dollar weighed on results, though IBM (NYSE:) proved that alone isn’t enough to keep a good operation down. 3M was also dogged by legal issues; in fact, thanks to mounting pressure, it announced in December that it would stop making per- and polyfluoroalkyl substances (PFAS) by 2025. Literally, thousands of lawsuits in which 3M is a defendant mention PFAS—these suits date back to 2015, but most have been filed since 2020.

What Has to Go Right: Among other things, 3M would benefit mightily from supply-chain issues clearing up. But . In the company’s most recent earnings report, 3M lowered its full-year 2022 outlook for organic sales, cash flow, and adjusted earnings. And looking ahead to 2023, the pros expect just 2% in earnings growth.

The Skinny: Verizon’s (NYSE:) -20% performance in 2022 doesn’t feel so bad considering the market wasn’t much better—until you realize that return includes the benefit of VZ’s massive dividend. Then it stings a little more. Verizon has sunk oodles of cash into building out its 5G network, but the payoff simply hasn’t come yet. Meanwhile, pricier plans to squeeze more money out of its customers weren’t received well, with Verizon reporting net losses in subscribers in the most recent quarter.

What Has to Go Right: Verizon’s acquisition of Tracfone, which closed in November 2021, gave it an important new revenue stream in the prepaid phone market that should continue to bear fruit in 2023. Weirdly, while price increases drove away some customers, its premium pricing is also a strength—the company continues to see traction with its premium unlimited wireless plans, as well as its business offerings. Still, a mobile price war wouldn’t be welcome in 2023. A nearly 7% yield provides a buffer for a few missteps, though, especially if the broader market improves this year.

Disclosure: Brett Owens and Michael Foster are contrarian income investors who look for undervalued stocks/funds across the U.S. markets. Click here to learn how to profit from their strategies in the latest report, “7 Great Dividend Growth Stocks for a Secure Retirement.”