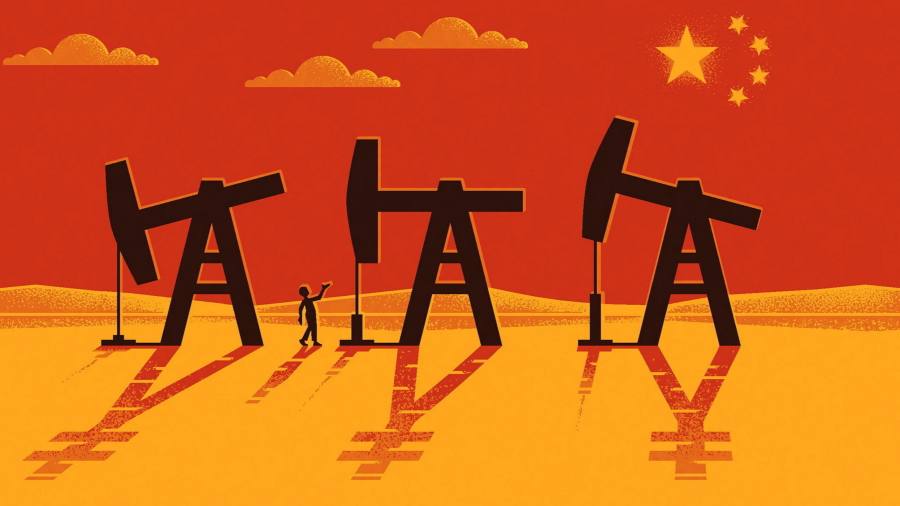 
On Valentine’s Day in 1945, US president Franklin Delano Roosevelt met Saudi King Abdul Aziz Ibn Saud on the American cruiser USS Quincy. It was the beginning of one of the most important geopolitical alliances of the past 70 years, in which US security in the Middle East was bartered for oil pegged in dollars.

But times change, and 2023 may be remembered as the year that this grand bargain began to shift, as a new world energy order between China and the Middle East took shape.

While China has for some time been buying increasing amounts of oil and liquefied natural gas from Iran, Venezuela, Russia and parts of Africa in its own currency, President Xi Jinping’s meeting with Saudi and Gulf Co-operation Council leaders in December marked “the birth of the petroyuan”, as Credit Suisse analyst Zoltan Pozsar put it in a note to clients.

According to Pozsar, “China wants to rewrite the rules of the global energy market”, as part of a larger effort to de-dollarise the so-called Bric countries of Brazil, Russia, India and China, and many other parts of the world after the weaponisation of dollar foreign exchange reserves following Russia’s invasion of Ukraine.

What does that mean in practice? For starters, a lot more oil trade will be done in renminbi. Xi announced that, over the next three to five years, China would not only dramatically increase imports from GCC countries, but work towards “all-dimensional energy co-operation”. This could potentially involve joint exploration and production in places such as the South China Sea, as well as investments in refineries, chemicals and plastics. Beijing’s hope is that all of it will be paid for in renminbi, on the Shanghai Petroleum and Natural Gas Exchange, as early as 2025.

That would mark a massive shift in the global energy trade. As Pozsar points out, Russia, Iran and Venezuela account for 40 per cent of Opec+ proven oil reserves, and all of them are selling oil to China at a steep discount while the GCC countries account for another 40 per cent of proven reserves. The remaining 20 per cent are in regions within the Russian and Chinese orbit.

Those who doubt the rise of the petroyuan, and the diminution of the dollar-based financial system in general, often point out that China doesn’t enjoy the same level of global trust, rule of law or reserve currency liquidity that the US does, making other countries unlikely to want to do business in renminbi.

Perhaps, although the oil marketplace is dominated by countries that have more in common with China (at least in terms of their political economies) than with the US. What’s more, the Chinese have offered up something of a financial safety-net by making the renminbi convertible to gold on the Shanghai and Hong Kong gold exchanges.

While this doesn’t make the renminbi a substitute for the dollar as a reserve currency, the petroyuan trade nonetheless comes with important economic and financial implications for policymakers and investors.

For one thing, the prospect of cheap energy is already luring western industrial businesses to China. Consider the recent move of Germany’s BASF to downsize its main plant in Ludwigshafen and shift chemical operations to Zhanjiang. This could be the beginning of what Pozsar calls a “farm to table” trend in which China tries to capture more value-added production locally, using cheap energy as a lure. (A number of European manufacturers have also increased jobs in the US because of lower energy costs there.)

Petropolitics come with financial risks as well as upsides. It’s worth remembering that the recycling of petrodollars by oil-rich nations into emerging markets such as Mexico, Brazil, Argentina, Zaire, Turkey and others by US commercial banks from the late 1970s onwards led to several emerging market debt crises. Petrodollars also accelerated the creation of a more speculative, debt-fuelled economy in the US, as banks flush with cash created all sorts of new financial “innovations”, and an influx of foreign capital allowed the US to maintain a larger deficit.

That trend may now start to go into reverse. Already, there are fewer foreign buyers for US Treasuries. If the petroyuan takes off, it would feed the fire of de-dollarisation. China’s control of more energy reserves and the products that spring from them could be an important new contributor to inflation in the west. It’s a slow-burn problem, but perhaps not as slow as some market participants think.

What should policymakers and business leaders do? If I were chief executive of a multinational company, I’d be looking to regionalise and localise as much production as possible to hedge against a multipolar energy market. I’d also do more vertical integration to offset increased inflation in supply chains.

If I were a US policymaker, I’d think about ways to increase North American shale production over the short to medium term (and offer Europeans a discount for it), while also speeding up the green transition. That’s yet another reason why Europeans shouldn’t be complaining about the Inflation Reduction Act, which subsidises clean energy production in the US. The rise of the petroyuan should be an incentive for both the US and Europe to move away from fossil fuels as quickly as they can.

Two CEOs is better than one with Henrique Dubugras from Brex