As I sat to write this, I wondered whether to provide a balanced argument about whether I think 2023 will be a bullish or a bearish year for stocks. But then I thought to myself, “what would be the point of that?”

Perhaps much more relevant would be for me to present the many risks and — fewer — opportunities shaping up in the near-and mid-term horizons.

Overall, I feel this macro background is not one you would associate with excessive risk-taking. The economic outlook is not going to change overnight, which means much of the issues we are facing right now could well be with us well into 2023.

And after a big rebound started in October, much of the positivity about the Fed pivoting to a less hawkish stance has now been priced in. So, I reckon that the risks are skewed to the Downside for stocks in 2023.

But that doesn’t mean that the markets will keep falling. 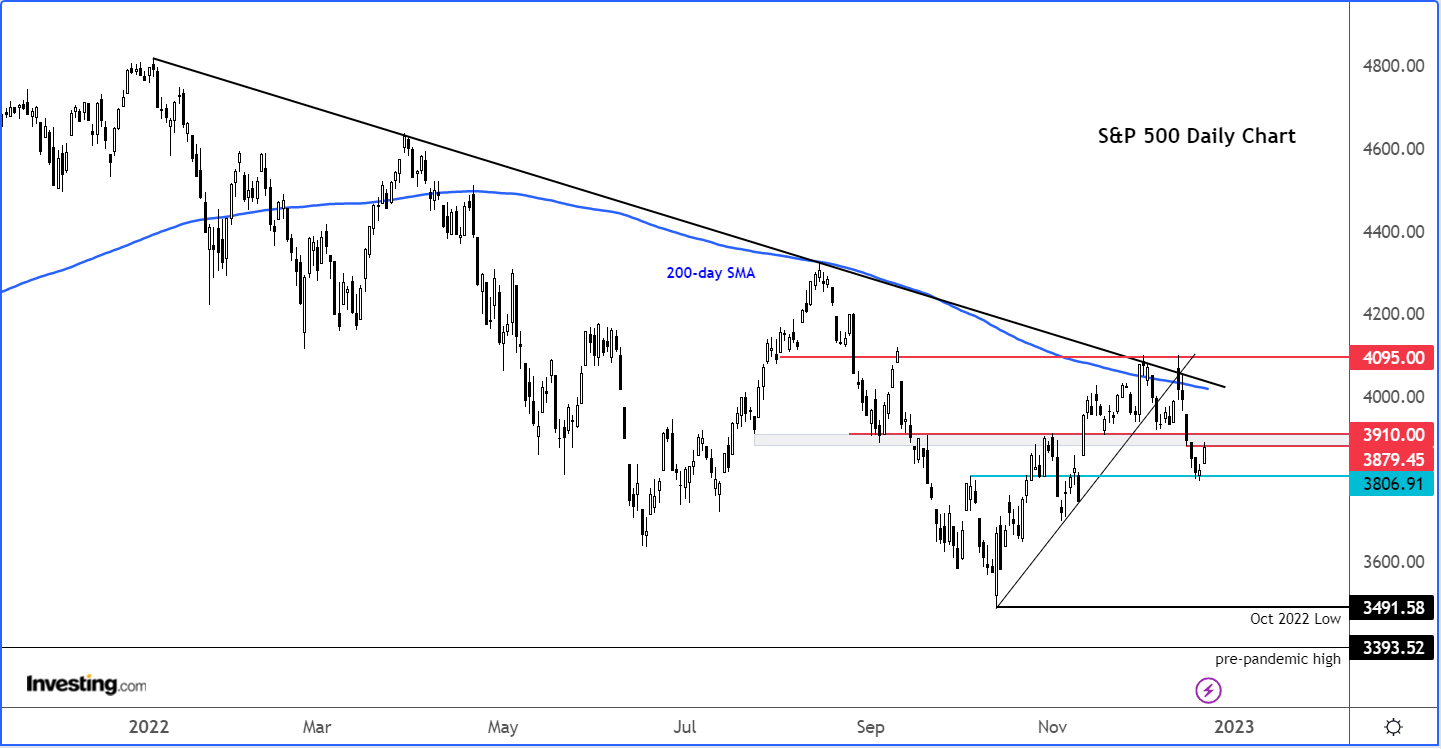 In 2023, there will be plenty of , although the general trend is likely to be lower, at least in the year’s first half.

Thereafter, it is very difficult to say what might happen. It will depend on the consumer’s health and inflation at the time, as well as other key factors that could heavily influence the sentiment, including – but not limited to – the potential for the Fed to start cutting .

In much of 2022, soaring was the ultimate culprit behind the weakness in stocks – especially the technology sector – as well as cryptos.

High inflation meant people had lower disposable incomes to invest. It also meant the Fed and other central banks had to raise interest rates very sharply, which further reduced the consumer’s buying power while raising borrowing costs for businesses and governments.

Finally, it meant that yields on government bonds would soar, reducing the appeal of assets that paid zero or low dividend/yield. But as U.S. inflation started to fall, investors quickly reversed their trades, favoring equities, metals, and foreign currencies over the .

As we look forward to the new year, optimism about inflation peaking is all I can think of in terms of it providing support or limiting the downside risks for stocks. There may well be times when the markets go higher for sustained periods.

Still, at least some of this peak-inflation narrative is already priced in after the markets surged higher from their October lows.

For investors to continue piling into equities, we will now need to see a strong economic recovery to help boost revenue and profit for corporates. This looks unlikely as prices are unlikely to go back down to levels they were previously (although the rate of inflation is set to fall sharply – due above all to base effects and lower economic activity).

Central banks will keep their monetary policies restrictive, and governments, having already spent vast amounts of borrowed money during the pandemic, aren’t going to be splashing the cash. There’s an additional risk that we will see active quantitative tightening as the Fed and some other major central banks try to reduce their massive balance sheets. The Fed has already signaled it would raise rates further and that the contractionary policy will remain for a long time.

In other words, there are plenty of risks facing investors. In Europe, the likes of the remain at risk. It looks like the ECB is not done yet with policy tightening after Christine Lagarde warned that hikes of 50 basis points should be expected for some time.

The combination of lower economic output and high inflation means there will be plenty of reasons for the bears to sell into strength than for bulls to buy into weakness.

In Japan, the , supported all these years by the Bank of Japan’s ultra-loose policy, could be the one to watch for a big reversal. Not to be left out this time, the BoJ tweaked its yield curve policy slightly in a move that the markets interpreted as the stepping stone for the start of the end of its extraordinarily loose monetary policy.

Disclaimer: The author does not own any of the securities mentioned in this article.