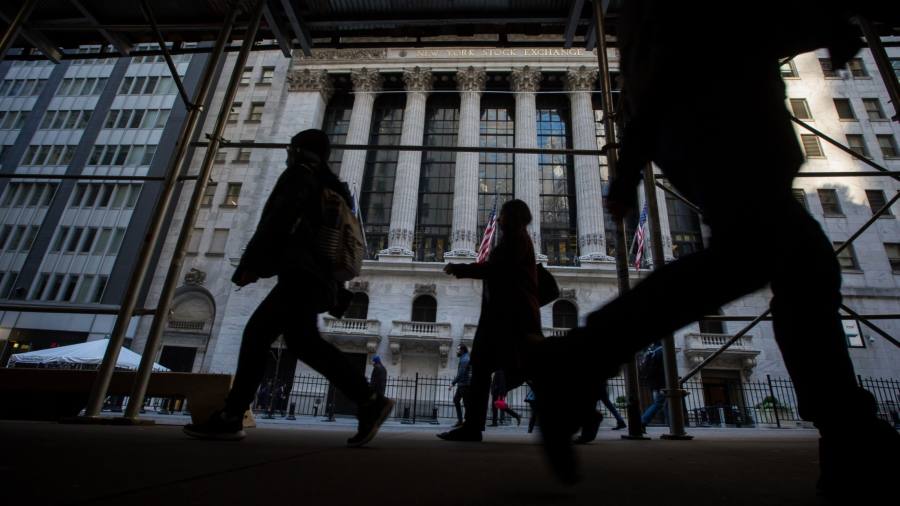 
Global stocks and bonds are set to register losses of more than $30tn for 2022 after inflation, interest rate rises and the war in Ukraine triggered the heaviest losses in asset markets since the global financial crisis.

The broad MSCI All-World index of developed and emerging market equities has shed nearly a fifth of its value this year, the biggest decline since 2008, with shares from Wall Street to Shanghai and Frankfurt all notching up significant falls.

Bond markets have also endured heavy selling: the US 10-year government bond yield, a global benchmark for long-term borrowing costs, has shot up to 3.9 per cent from about 1.5 per cent at the end of last year — the biggest annual increase in Bloomberg records stretching to the 1960s.

“We had this situation for years where equities and bonds were both expensive because they were the same game, driven by low inflation and low interest rates,” said Luca Paolini, chief strategist at Pictet Asset Management. “The lesson of this year is that at some point there’s a day of reckoning, and when it comes it’s brutal.”

The market value of companies traded across all global stock exchanges tumbled by $25tn, according to Bloomberg, while the data provider’s Multiverse index, which tracks global government and corporate debt, is down almost 16 per cent or $9.6tn in market value terms, according to provisional calculations at Thursday’s market close.

Antonio Cavarero, head of investments at Generali Insurance Asset Management, described stocks’ and bonds’ joint downward trajectories as “a game-changer for investors”. This contrasts with 2008, when the slump was concentrated on equities while bond prices rose and dealt a painful blow to many investors who build portfolios in the hope that fixed-income holdings will act as a ballast when equities markets tumble.

The losses came after central banks led by the US Federal Reserve ratcheted up borrowing costs in an attempt to control the worst spell of inflation in decades.

Those interest rate rises brought to a dramatic close the era of cheap money that followed the financial crisis, which squeezed down the yields on safe government debt below zero and pushed up the prices of even the riskiest assets, particularly in the wake of the Covid-19 pandemic.

Russia’s invasion of Ukraine in February also inflamed a severe bout of inflation, disrupting supply chains. An 8 per cent surge in the US dollar against a basket of half a dozen major peers has placed further pressure on many markets.

Surging borrowing costs also wiped trillions of dollars off the value of the US’s tech titans, which had led the pandemic-era rally beginning in 2020.

Tesla, the electric carmaker, has shed almost two-thirds of its value this year, while chipmaker Nvidia has dropped 50 per cent. US tech heavyweights Apple and Microsoft have tumbled almost 30 per cent, while Google parent Alphabet is off nearly 40 per cent and Facebook owner Meta has plummeted 64 per cent.

Overall, the blue-chip US S&P 500 stock gauge is down 21 per cent this year, with the tech-focused Nasdaq Composite off 34 per cent. Both indices are on track to record their worst annual performance since 2008.

The value of the cryptocurrency market has tumbled by $1.7tn since the start of 2022, according to Financial Times data, in a sign of how the speculative fervour that took hold in 2020 has burst this year.

China’s sprawling equities markets also sustained a blow as the economy was disrupted by strict zero-Covid measures and the country is now battling a huge wave of infections as it opens up again. The CSI 300 measure of stocks in Shanghai and Shenzhen fell 22 per cent in local currency terms and 28 per cent in dollar terms.

The MSCI Europe index is down about 16 per cent in dollar terms, but a slimmer 11 per cent in euros.

Commodities have been among the rare gainers in global markets this year: the broad S&P GSCI gauge has rallied 8 per cent, with energy and agriculture prices posting strong gains.

London’s FTSE 100, which is heavily weighted towards energy, mining and pharmaceutical companies, which have fared better in this year’s market shift, is up slightly for the year to date in sterling terms.

The intensity of this year’s market swings highlights the scale of regime change faced by global investors, who had grown accustomed to low interest rates.

Higher interest rates dent the appeal of holding assets such as stocks and riskier debt because investors are able to earn better returns in cash or ultra-safe assets such as US, German or Japanese government bonds. Since higher rates make borrowing more expensive, they also tend to place pressure on the broader economy by tightening financial conditions for companies and businesses.

Chipotle Looks Like a Buy — But One Pitfall Looms

EU Will Likely Ban Bitcoin To No Avail – Bitcoin Magazine