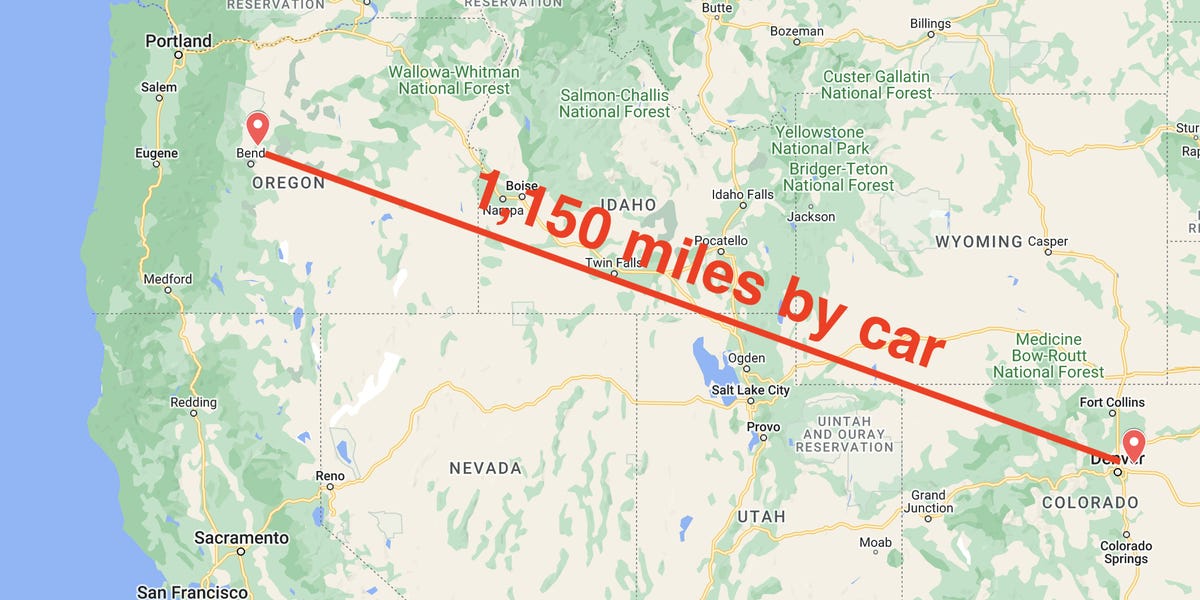 A couple says they ended up driving for 18 hours on Christmas Eve to catch a last-minute flight after their Southwest flight from Denver was canceled amid the travel chaos.

Alex Kain told CNBC that the flight he and his girlfriend were meant to take from Denver to Seattle was canceled at 2 a.m. They decided instead to hire a rental car and drive more than 1,100 miles to an airport in Redmond, Oregon, which offers multiple flights a day to Seattle, to catch an Alaska Airlines flight, he said.

“There’s no amount of money they could give us to make us fly Southwest again,” Kain told the outlet.

The last-minute change of plan ended up costing the couple up to $3,000, Kain estimated. They told CNBC that they planned to request reimbursement to cover the hotels, rental car, gas, and replacement flight.

Some passengers were stranded over Christmas as the bitter winter storm that ripped through the US last week caused major disruptions to air travel across the country. Southwest took much longer to resume normal operations than other airlines. This has stemmed largely from issues with its scheduling tools, including problems getting crew to where they needed to be to operate flights.

The Dallas-based airline canceled 71% of its schedule – or 2,909 flights – on Monday, according to flight-tracking site FlightAware. The airline also said it would operate roughly one-third of its regular schedule for the “next several days.”

On Thursday, Southwest cut 57% of its flights, per FlightAware data, compared with 5% at Frontier, the US airline with the second-highest percentage of flights canceled that day.

But Southwest plans to resume “normal operations with minimal disruptions” from Friday. As of 6 a.m. ET, only 39 flights – less than 1% of its schedule – are set to be cut, according to FlightAware.

“We are encouraged by the progress we’ve made to realign crew, their schedules, and our fleet,” the airline said in a statement on Thursday. The carrier has asked corporate employees to volunteer for eight-hour shifts helping with crew scheduling rather than carrying out their normal duties, Insider reported.

A union representing Southwest staff has blamed the airline for the chaos, saying that “outdated” scheduling software meant flight attendants had to rely on manual solutions and phone calls to get accommodation and find out their next routes.

“We have much work ahead of us, including investing in new solutions to manage wide-scale disruptions,” Southwest said Thursday.

Southwest said passengers who experienced cancellations or significant delays between December 24 and January 2 can fill in a form to request a refund of their unused ticket. The airline says it will honor “reasonable requests” for reimbursement for meals, hotel, and alternate transportation. This includes rental cars or tickets on other airlines if passengers email their receipts.

Southwest also said customers booked on flights through January 2 could rebook the same route on new dates within 30 days of their original departure date at no extra charge.

Southwest did not immediately respond to Insider’s request for comment made outside of normal working hours.

Have you been affected by current travel disruptions? Or do you work at an airport or for an airline that’s swamped by the chaos? Email this reporter at gdean@insider.com.