At least 10 companies including General Dynamics, Halliburton and EOG Resources have added climate change risks to their regulatory disclosures following demands from the US Securities and Exchange Commission, which could use this information to defend its climate rule in court next year.

In early 2023 the SEC is expected to complete a new rule requiring companies to disclose more information on their vulnerabilities to global warming. Certain emissions information would also need to be audited.

An array of opponents have lined up against the rule since the SEC proposed it in March 2022. Companies have warned of exorbitant new costs in complying with climate risk disclosures. Republican state attorneys-general have threatened lawsuits.

The regulation also poses a tricky political problem for the Biden administration. Democratic senator Jon Tester of Montana, who is facing one of the toughest re-election fights in the country in 2024, raised concerns over the disclosure requirements with regard to emissions from a company’s suppliers or customers.

The Financial Times found new climate risk disclosures from 10 companies. Legal experts say the statements could be used by the SEC in court.

“The fact that SEC staff have been making these comments to companies under existing law can help the agency make clear to courts that its climate rule is an evolution of longstanding securities law — not the revolution those hoping to challenge the rule are trying to claim,” said Satyam Khanna, a former agency staffer who worked on climate issues and is now a fellow at the Stanford University Institute for Economic Policy Research.

Halliburton, the oilfield services company, said it would add to its annual regulatory report in 2023 that a transition away from fossil fuels posed a risk to the company. “Developments associated with climate change concerns and energy transition” could hurt the company, Halliburton told the SEC in a letter made public in December.

“We believe that one of the significant risks that we face in energy transition is that we will be unable to innovate in a timely, cost-efficient manner, or at all,” the company said.

Other oil and gas companies also disclosed new climate risks after SEC prodding. EOG Resources told the commission it updated its annual regulatory filing this year to say climate change “may result in negative perceptions of the oil and gas industry” and that could hinder its ability to raise money. Murphy Oil also added language saying sovereign wealth funds, pensions and other investors had shifted investments away from fossil fuels.

Diamondback Energy added to its disclosures in August that “continuing political and social concerns relating to climate change may result in significant litigation and related expenses”. 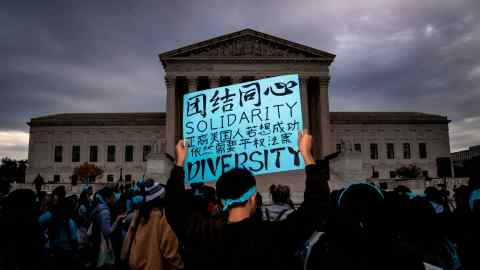 “Do these responses strengthen the SEC’s hand [in court]? Yes,” said Lee Reiners, policy director at the Duke University Financial Economics Center. He said the SEC was likely to use these climate-related responses in a court fight, “and they would be smart to do that”.

The SEC’s corporate finance division routinely asks companies about their regulatory disclosures and occasionally sweeps the market on a particular issue.

Earlier in 2022, the agency sent letters to companies about their exposure to Russia following its invasion of Ukraine. Citigroup responded by updating its disclosures about Russia. In rare cases the corporation finance division will refer disclosure concerns it finds to the SEC enforcement arm.

General Dynamics declined to comment and Union Pacific did not immediately have a comment. Other companies mentioned in this article, as well as the SEC, did not respond to requests for comment.

Companies might have been simply compelled to add the climate risk disclosures to “get the SEC off our back”, said Reiners. Halliburton, for example, received three SEC letters on its climate disclosures this year.

“If you are a company, your choices are either to say, ‘no, we think you are wrong’ or just say, ‘You know what?’ It is not worth the fight. Let’s just put this information in there,’” Reiners said.

Chipotle Looks Like a Buy — But One Pitfall Looms