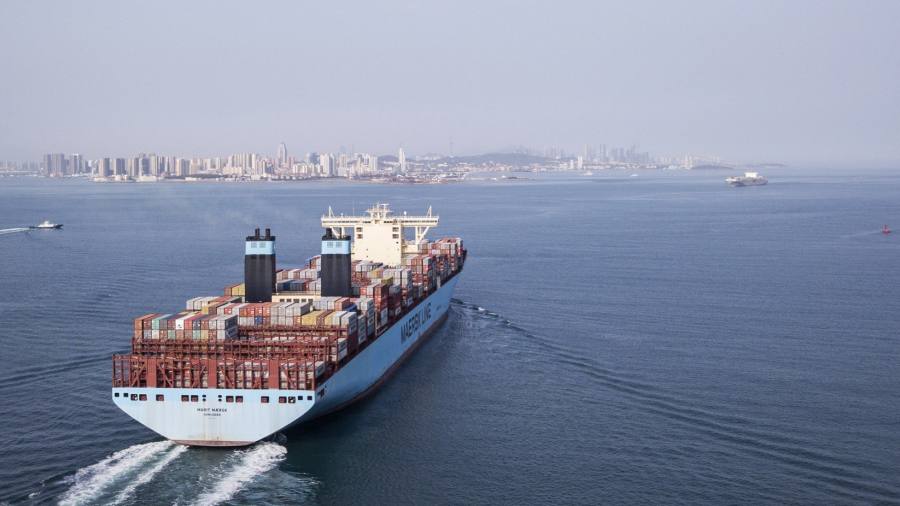 ‘There will still be a global trade’: AP Møller-Maersk chief bows out after 40-year voyage


Container shipping should be unaffected by any backlash against globalisation or move by companies to build up more regional supply chains, according to the influential outgoing head of AP Møller-Maersk.

In an interview with the Financial Times after four decades at the Danish group including the past seven years as chief executive, Søren Skou described container shipping as both one of the main beneficiaries of globalisation and one of its biggest drivers.

Skou, who will be replaced as Maersk chief executive by its shipping and logistics boss Vincent Clerc on January 1, said politicians globally were taking a much more active interest in supply chains and industrial policy such as semiconductors.

“For container shipping it may not matter very much,” he said. “We are not shipping a lot of chips, a lot of pharma. Most products in containers, they are not strategic. Whether it’s jeans or sneakers, I think there will still be a global trade.”

Skou’s 40-year career at the Danish group has coincided almost exactly with Maersk’s entire journey in container shipping from a new player in a fledgling industry to one of the dominant companies in a sector synonymous with global trade.

A chief executive for the past two decades, first at Maersk’s oil tankers business, then its container shipping line and finally for the whole group, Skou transformed what was a sprawling conglomerate into a business focused more on ocean trade and logistics.

He pointed out that it cost about $2,000 to transport a container from Shanghai to Rotterdam that could contain about 8,000 pairs of trainers. “That’s why they’re making the sneakers in Asia. The transportation cost is not material,” he said.

Skou conceded that container shipping’s golden days — when it grew up to 10 per cent a year from his start in 1983 until the global financial crisis in 2008 — were over as trade liberalisation had come to an end, to be replaced by trade wars between the US and China in particular.

“Pretty much all the manufacturing that could move to Asia has done,” he said. “Trade liberalisation has come to a stop and in some years it has gone backwards . . . Maybe we will see more regionalisation, which isn’t bad for our business. Globalisation has matured.”

Skou is set to bow out with by some distance the best results in Maersk’s 118-year history, with the company forecasting underlying operating profits of about $31bn, against 2021’s record $20bn.

But his successor Clerc, only the sixth chief executive in Maersk’s history and the first non-Dane, will face significant challenges in both the short and medium term as container shipping confronts a sharp slowdown and the task of becoming emissions-free.

“He will have to deal with the normalisation of the business in container shipping, the inflationary pressure and what needs to be done to protect margins. Engineering a proper landing from the elevated heights we have been at — I think it will take a lot of hard work,” Skou said.

He said the leadership change was coming at the “right time” for him, Clerc and Maersk. Skou will not seek another executive role or enter Maersk’s main board but he kept open the possibility of doing something else in the “Maersk sphere”, which includes a holding company set up by the founding family and main shareholder in the Danish group. “When your successor is ready, it’s time to move on,” Skou said.

Skou was named chief executive in 2016 with a mandate to end Maersk’s days as a conglomerate by selling off its oil businesses and to reignite revenue growth after a decade of stagnation. He sought to build an integrated shipping and logistics business that aimed to offer customers a one-stop shop to send goods from the factory to consumers by ploughing its record profits into a number of large-scale acquisitions.

“In 2016, the company wasn’t doing well, it wasn’t going anywhere. The business model has changed dramatically, so has the culture of the company,” said Skou, pointing to 16 consecutive quarters of improving results.

Shares in Maersk have risen by about three-quarters during his tenure but much of the change has taken place since the Covid-19 pandemic. The Danish group almost quintupled in value from its low point in March 2020 until early 2022 when supply chain woes pushed freight rates for container shipping to record highs. They have almost halved since then as investors fret about a possible disorderly slowdown.

Skou said he was optimistic about the longer-term challenges, particularly decarbonisation. Maersk, which is aiming to be net zero by 2040, has ordered its first vessels capable of running on green fuels.

He said the 10-12 per cent premium in cost to normal ships could be eliminated once the supply chain for emission-free fuels is in place. “I’m very optimistic about this. From a 20-year perspective, it’s very do-able,” he added.

Up Against Analyst Price Targets, Starbucks Looks a Little Too Hot Here