Supply chain bottlenecks prevent the company from manufacturing more planes for delivery as it expects challenges to continue throughout 2023. For example, it lacks engines for its 737, preventing it from increasing deliveries. It expects $2 billion in abnormal costs for the 787 program as it reworks inventory and decreases production levels.

Investors may wonder if the shares have gotten ahead of themselves if the company can’t boost its deliveries despite the . The company expects to see $3 billion to $5 billion in free cash flow in 2023. The company is slowly and steadily working its way through the supply chain bottlenecks, as expressed by its CEO Dave Calhoun in a CNBC interview on Dec. 13, 2022. He expects supply chain constraints to get much better after 2023.

Airlines usually replace wide-body aircraft after 25 years, but some stretch this to 30 years. United Airlines Holdings (NASDAQ:) announced on Dec. 13, 2022, to purchase up to 200 Boeing 787 Dreamliners as part of its United Next plan to replace its aging fleet. Deliveries are expected between 2024 and 2032. United also exercised options to purchase 44 Boeing 737 MAX plans for delivery between 2024 and 2026 and 56 MAX airplanes between 2027 and 2028.

The new airplanes will replace its fleet of aging Boeing 767 and Boeing 777 currently being used, as they are scheduled to be removed by 2030. United Airlines’ total purchases could equate to nearly $34 billion in revenues with a list price ranging between $37 billion to $47.5 billion, but don’t pay list price. Therefore, the exact value of the purchases can only be speculated upon as prices can change with the exercising of options. Boeing is expected to deliver 100 of its 787 airplanes between 2023 and 2032.

This doesn’t include orders from other major carriers like Southwest Airlines Company (NYSE:), which uses Boeing 738 and 737 aircraft exclusively, Delta Air Lines (NYSE:), which orders 100 Boeing 737 MAX 10 aircraft, and American Airlines Group (NASDAQ:) who decided to double its fleet on Boeing 787 Dreamliners with 47 more valued at $12 billion and 28 options.

On Oct. 26, 2022, Boeing released its fiscal third-quarter 2022 results for September 2022. The company an earnings-per-share (EPS) loss of (-$6.18) excluding non-recurring items versus consensus analyst estimates for a loss of (-$0.07), a (-$6.25) miss but may not be comparable. It took a significant hit on fixed-price military contracts. Revenues grew 4.5% year-over-year (YoY) to $15.96 billion, missing analyst estimates of $18.03 billion. The company resumed delivering its 787 airplanes and nine in the quarter.

The company recorded losses on fixed-price defense development programs and generated an operating cash flow of $3.2 billion. The company ended the quarter with $13.5 billion in cash with access to $12 billion of credit which remains undrawn. The total company backlog was $381 billion at the end of the quarter.

“We continue to make important strides in our turnaround and remain focused on our performance. We generated strong cash in the quarter and are on a solid path to achieving positive free cash flow for 2022. At the same time, revenue and earnings were significantly impacted by losses on our fixed-price defense development programs. We’re squarely focused on maturing these programs, mitigating risks, and delivering for our customers and their important missions.” 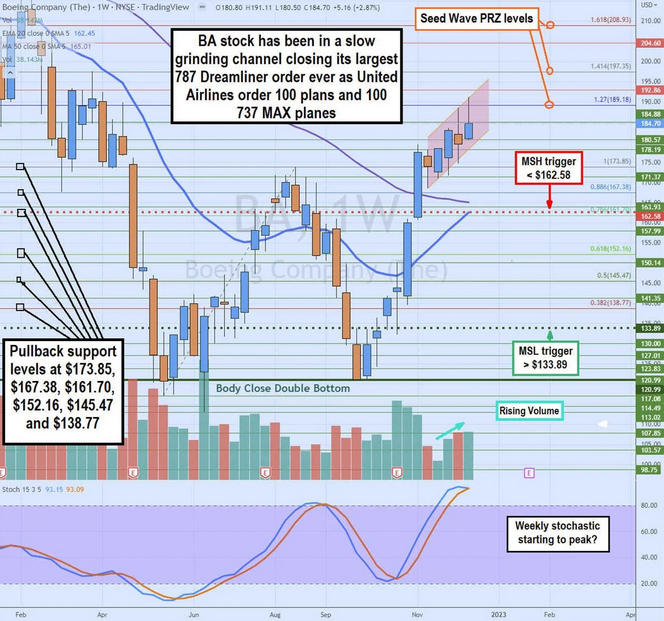 BA stock has been in a rising price channel after breaking through its prior swing high at $173.85. This was preceded by the body close double bottom around $121 in September 2022, which triggered a weekly market structure low (MSL) buy signal on the breakout through $133.89. The stochastic completed a full oscillation up through the 80-band as it potentially peaks near the 93-band. The weekly 20-period exponential moving average (EMA) is now supported at $162.45 as the weekly 50-period MA attempts to reverse the downtrend and cross up.