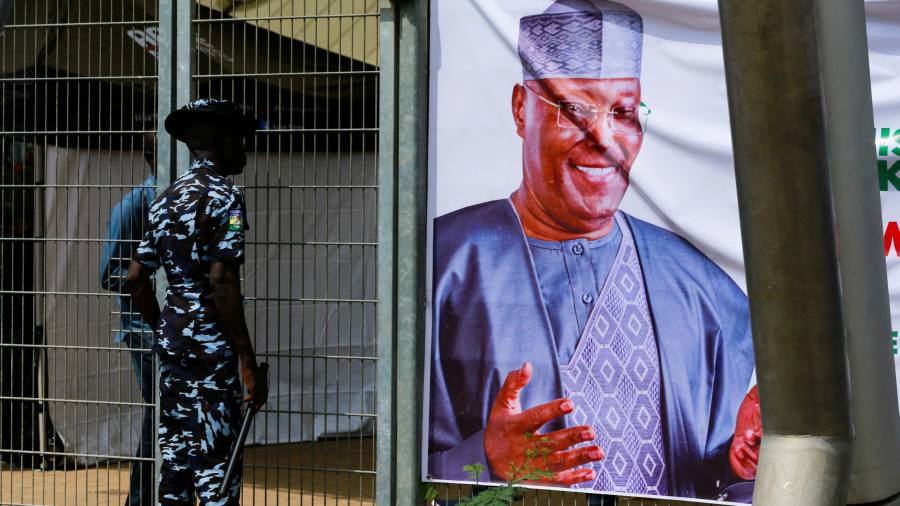 
No one in Nigerian history has run for president more times than Atiku Abubakar. The top prize has eluded him on each occasion.

In February, the former vice-president will make his sixth attempt as Nigerians choose a replacement for outgoing president Muhammadu Buhari. This time, political aides and analysts say, the complicated electoral maths of Africa’s largest economy may count in his favour.

“It is a life-long ambition and as long as I’m alive and strong and healthy, I will continue pursuing it,” Abubakar told the Financial Times at his suite in one of Lagos’s most luxurious hotels after a campaign rally. But he quickly suggested this would be his final act: “I’ve come to the last stage now. I don’t think after this I will run again.”

Amid a throng of jubilant supporters in the hotel lobby, a long-serving Abubakar aide sketched out his 76-year-old boss’s route to victory. Abubakar, he said, would give his opponents a close run in their southern strongholds and take advantage of Buhari’s absence on the ballot for the first time since 1999 to win the vote-rich north by a wide margin.

The election will pit Abubakar, of the opposition People’s Democratic party (PDP), against Bola Tinubu, of the ruling All Progressives Congress (APC), and Peter Obi, of the small Labour party, who has emerged as the first credible third-party candidate since Nigeria’s return to democracy 23 years ago. A recent poll of registered voters in rural communities in 12 of the 36 states put Obi ahead.

Amaka Anku, Africa director at the Eurasia consultancy, said Abubakar had advantages that could work in his favour. “Atiku is a household name and being well-known across the north and being a northerner, given the structure of Nigeria’s voter rolls, is a major selling point,” she said.

But his success is not guaranteed. Voters may have become “jaded” by his repeated attempts at the presidency, she said.

A 2010 US Senate committee report linking Abubakar to the transfer of $40mn in “suspect funds” to America has deepened voters’ suspicion about his rectitude. He denies wrongdoing.

Abubakar’s party has also been unsettled by internal divisions since he emerged as candidate in May. Five governors, including the governor of the oil-rich Rivers state, say his candidacy solidifies northern control of the party and have demanded the resignation of party chair Iyorchia Ayu, a northerner, to rebalance power with its southern base.

Whoever wins in February faces a tough in-tray. More than 8,000 people have been killed since the start of this year by violent groups, such as Boko Haram and the Islamic State of West Africa Province. Inflation has soared to more than 21 per cent, the naira currency has plummeted to record lows, and unemployment is at 33 per cent.

Abubakar styles himself as a pro-business candidate, promising the privatisation of the state-owned oil company and a “restructuring” of Nigeria to devolve more power to the states. “We will look into [previous] constitutional reform reports, update them and work with the governors, national assembly and state assemblies to amend the constitution to reflect the type of federation we want,” he said.

Oil was key to turning the economy around, he said. Years of under-investment in infrastructure and large-scale theft have depressed oil production. In a year where oil-producing nations have recorded significant revenue boosts, Nigeria produces a little over 1mn barrels a day of crude, far below its Opec daily quota of 1.8mn barrels. The country is set to spend $9bn on fuel subsidies this year, and previous presidents have shied away from reform.

“I will remove fuel subsidy,” he told the Financial Times. “Within the first 100 days in office, we should be able to make a decision.” He also promised to provide a “road-map” on how the money saved will be spent.

Attempts at privatising NNPC, the state-owned oil company whose shares are owned by the federal government, were muddled, he said. “I will have to study the so-called privatisation and see how we can review it and make sure that it conforms with our expectations which is realising as much revenue as possible.”

He also pledged to reform Nigeria’s multiple exchange rates with “a unified exchange rate or a maximum of two” in conjunction with the central bank. Some $10bn would be allocated to small and medium-sized enterprises to create jobs, money he claimed would be raised by the privatisation of state-owned refineries and savings from fuel subsidies.

With a public debt of $103bn, he said he would have “to approach our creditors to see how we can renegotiate and reschedule repayments”. He also plans to cut down on public sector expenditure, which he described as “expenditure not in favour of development”.

On crime and security, Abubakar said he would increase the number of police officers and other security service personnel and “train and equip them better”. He is also considering introducing state policing, a departure from Nigeria’s centralised force. 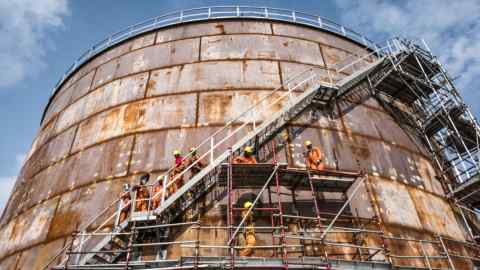 He said he planned to form a government of national unity that would include opposition politicians. When pressed if there could be a job for Obi, his running mate in 2019, he responded: “Why not?” Asked in what capacity, he said: “Let’s win the elections before thinking of roles people can play.”

Abubakar is still stung by his 2019 defeat, an election many expected would be a close race but ended with Buhari’s re-election by almost 4mn votes, extending his margin of victory from the previous poll.

Abubakar claimed the vote was stolen: “All well-informed sources believe I was rigged out,” he said. He added that this election would be harder to manipulate because of reforms, including the electronic transmission of results, by the electoral commission that have been deployed in recent gubernatorial elections.

Abubakar also said he had received personal assurances from Buhari that the polls would be free. “I’ve gotten a commitment from the president personally, because I sat down with him twice, that even if it is the only legacy he will leave, he will make sure he conducts free, fair and credible polls.”

Adobe: The Rally Should Continue