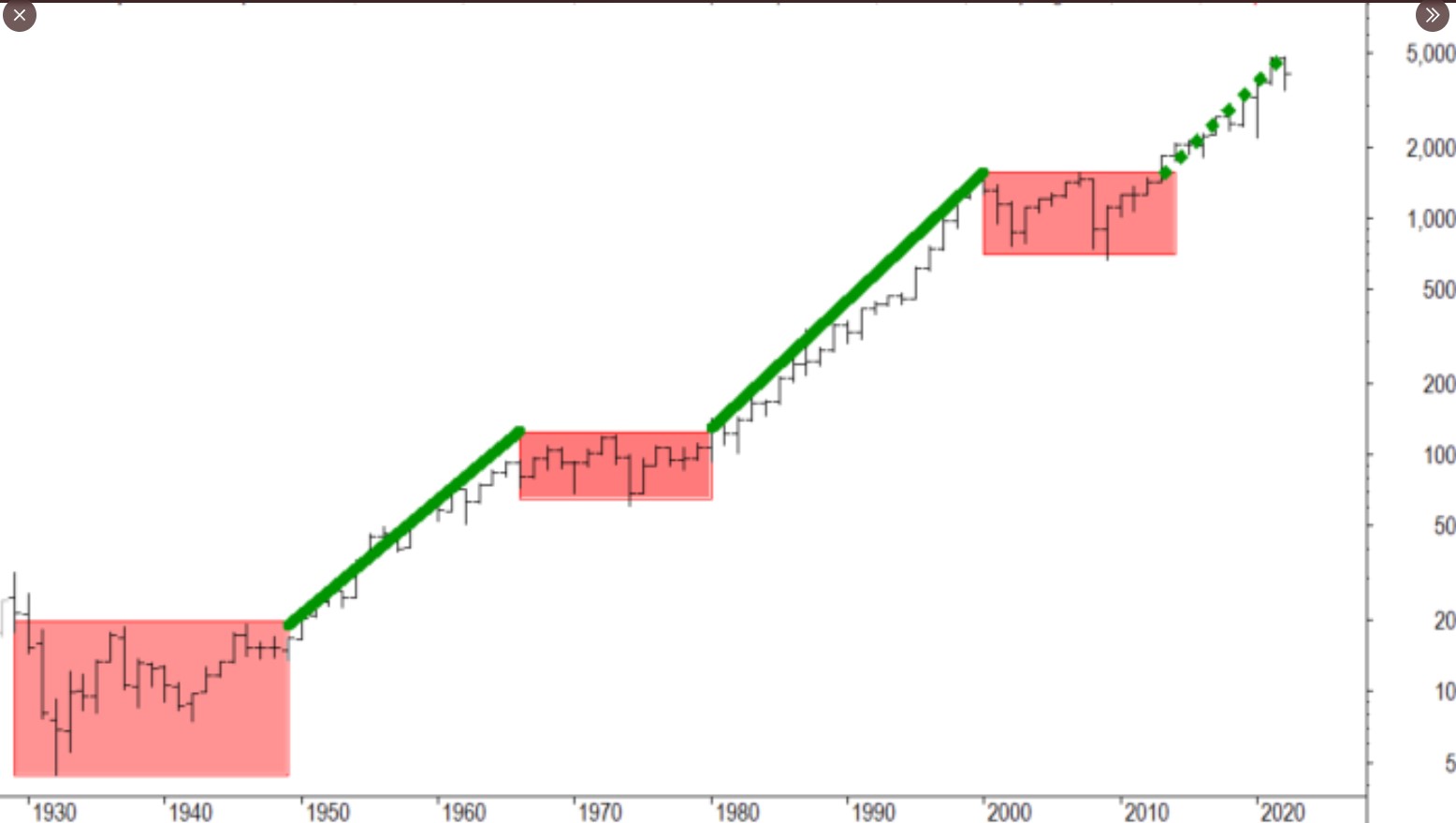 The Shortest Bull Market Ever

The above chart – from 1930 through the current period – is from a gentleman that can be found on Twitter under the moniker @thechartist, and what struck me about this chart this gentleman posted was that he also noted that if early January ’22 was the all-time-high for the , then this would be the shortest secular bull market in history, a theme that has been all but absent from CNBC and the other major financial news networks.

When this blog post on “annualized returns” was written and posted in early October ’22, one of the bullet points noted that – after peaking in March 2000 – the S&P 500 didn’t make a new all-time-high until May 2013, which means that if this secular bull market peaked in January ’22, it would be four years shorter than the last secular bear market from March 2000, through April 2013.

Last week, JP Morgan held a webcast discussing their long-term capital market assumptions (LTCMA). The same webinar a year ago noted their LTCMA for ’22 was +4.3%. In comparison, it has now been raised to +7.2% based on – my interpretation – the improvement in nominal yields in the bond market and the tempering of the annualized returns in the equity market.

Rick Rieder, the great Blackrock fixed-income CIO, did his monthly Thursday 7 am bond call this morning (he hasn’t held one in a while, to my knowledge), and he published this table on p. 18 of the slide show: 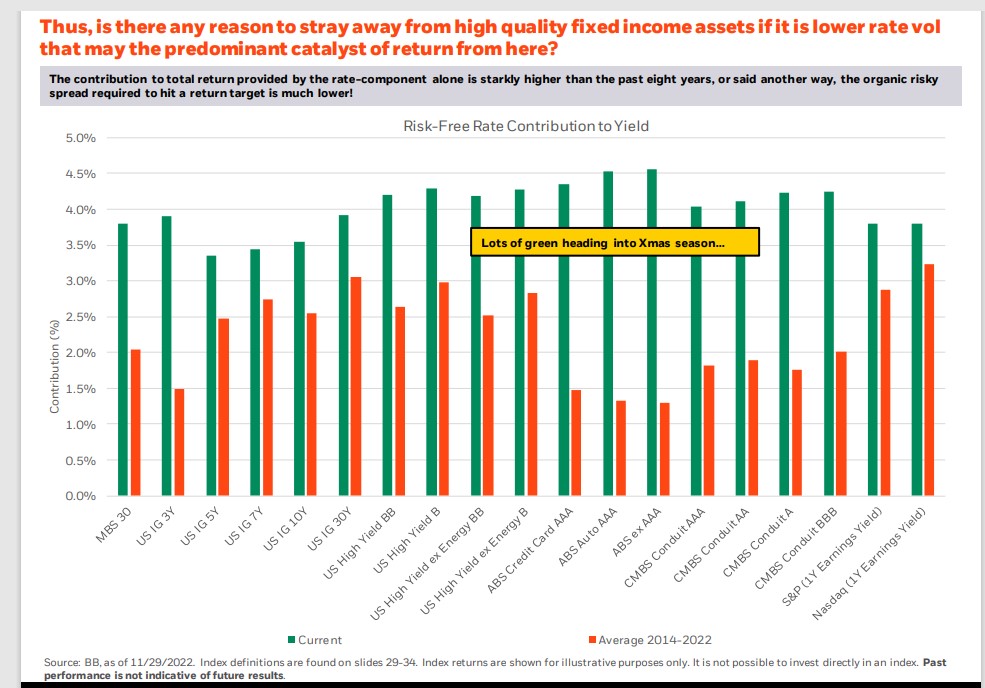 While it’s been a tough year, the Federal Reserve has greatly favored investors in terms of the attractiveness of a wide swath of fixed-income asset classes that today look a lot more attractive than a year ago. 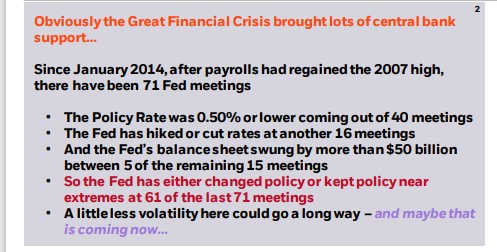 Another notable part of one of Rick Rieder’s slides was this note about and what it could mean to interest rates and credit spreads if 2023 was just more tempered and less “robust” from a monetary policy perspective. Jay Powell and the FOMC raised the fed funds rate four times in the last six months (has a Fed ever hiked rates that aggressively in its history ?) and will likely do at least 50 bp’s next week.

Most readers are likely more interested in prospective stock market returns, and the one asset class I find very interesting is non-US or international assets.

When fell from $100 in September 2014 to $28 per barrel by Q1 2016, at that point, the 10-year return on emerging markets had gone to zero. The emerging market asset class had a very robust 2017 and petered out after that. In hindsight looking back at emerging markets from the start of this century, it’s clear that China’s GDP growing at 10% – 15% per year from 2000 through the early part of the last decade drove a lot of the emerging market returns.

Clients will never own China again, for any reason, but the “emerging markets ex-China” (iShares ex China (NASDAQ:)) have a growing weighting in accounts. remains a large holding, which is being supplemented with the Vanguard All-World ex-US Index Fund ETF (NYSE:) (all world EX US) and Vanguard FTSE Developed Markets Index Fund ETF (NYSE:).

With the dollar finally breaking, although it is currently near its 200-day moving average, historically, after its very bullish run (even stronger than its 2000 to 2002 bull run), it typically continues to weaken, which would encourage a non-US overweight in investment accounts.

In terms of the US equity markets and asset classes, if you’ve been reading this blog’s “style box updates“, the best value seems to be in small and mid-cap asset classes, while large-cap growth, given its extended period of above-average annual returns, will probably not fall apart as many expect like 2001 and 2002, but could simply be in for a period of “blah” returns. If there was one sector of the stock market that benefitted hugely from COVID and the lockdowns and worked away from home, it was large-cap technology, and now we are seeing the hangover. 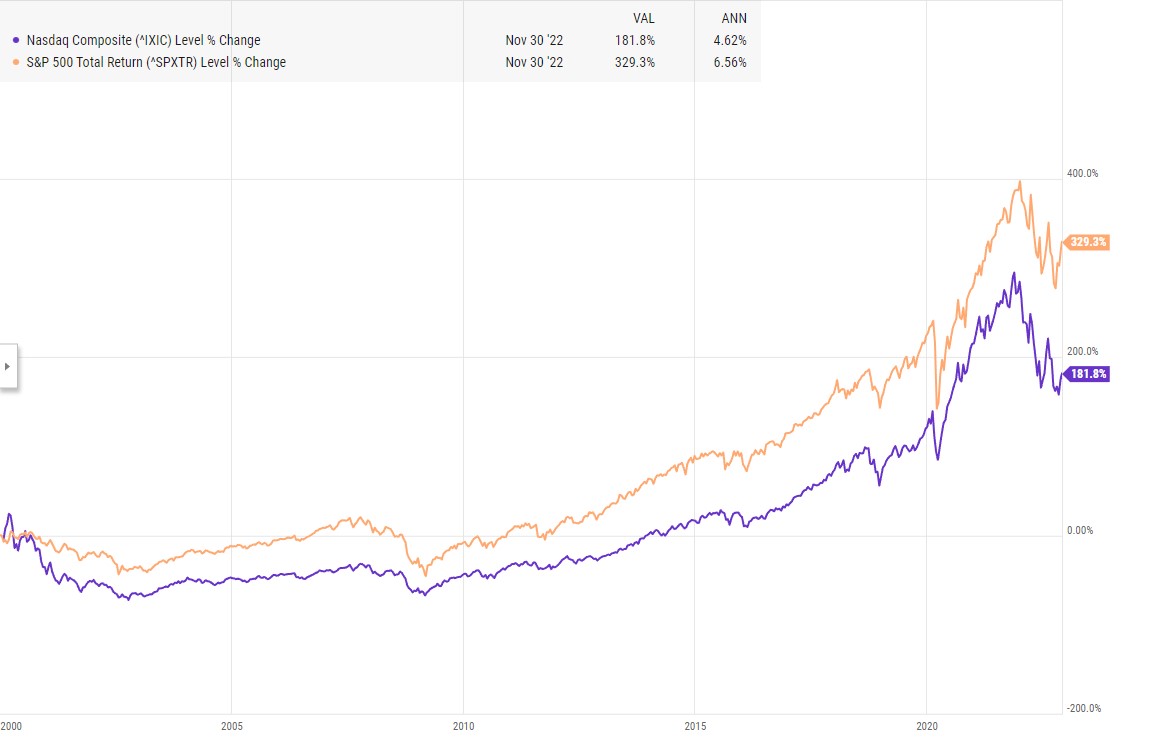 Given the negative sentiment headed into 2023 around the US stock markets, I wouldn’t be surprised to see a +15% return for the S&P 500 in 2023, possibly a lot of it back-end loaded. Wage inflation could be an issue as consumer prices start to moderate. Crude oil and gasoline are falling quickly, but grocery inflation continues to be an issue.

After reading the Kroger (NYSE:) conference call summary, Kroger management did say that they expected grocery inflation to moderate in 2023, down to 2.5% – 3%, but it didn’t read like it was said with a lot of conviction. Kroger did say that in the 4th quarter of 2021, inflation rose to 4% and that the inflation comparison might get easier as 2023 unfolds.

Last week’s increase got a lot of attention, but interestingly, long-dated Treasuries couldn’t hold their losses on the day. The Treasury finished the day at a smaller loss and is trading at a lower yield this week (3.46%) than it closed last Friday, Dec. 2 (3.50%).

Next week is and then the .

Unfortunately, the next few weeks and through January ’23 will see readers and investors inundated with stock, bond, and economic forecasts, and readers should take all of it with considerable skepticism. It’s impossible to predict – it is – and while last year at this time, this blog made some reasonably-accurate assumptions about 2022 (here and here), the one event that was quite unexpected was the invasion of Ukraine by Russia and what that did to continental Europe and the and energy prices.

While the Fed was 90% of the story for this year, the disruption caused by Ukraine was significant. That threw a wrench into everything, but it’s now approaching a year later, and the avalanche of negatives is fading, particularly for Non-US and international investing.

A year ago, every client meeting was left with “2022 is going to be a tougher year.” Still, I do think (and this is just one opinion) that 2023 will be an easier year to get a reasonable return on equities and bonds, and in no way do I think 2022 was the start of a secular bear market.

That’s one opinion, and take it for what it’s worth. 2022 went a long way towards removing a lot of bullish sentiment and made the various fixed-income asset classes attractive again from a yield and total-return perspective.