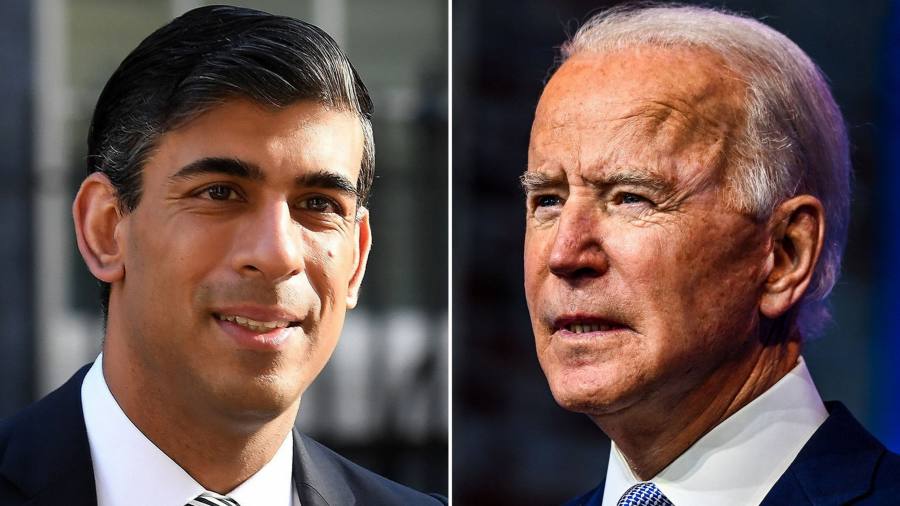 Good afternoon. This is Andy Bounds in Brussels taking over the newsletter from Peter for the day.

I want to shed light on an issue which is the talk of the town here but largely ignored in London: the threat to transatlantic relations from US trade policy.

Many Brexit proponents wanted to free themselves from Brussels to strike a trade deal with the US, the only single deal that could deliver a significant economic boost — even though such a deal would add only 0.16 per cent to the overall size of the economy at most, according to the UK Trade Policy Observatory at the University of Sussex.

Compare that with the 4 per cent drop in GDP caused by leaving the EU, according to Office for Budget Responsibility estimates.

Even Brexiters such as Kemi Badenoch, the trade secretary, now accept that Washington is in no mood to strike deals. In fact, it is growing more protectionist, as the Inflation Reduction Act shows.

Signed into law on August 15 by Joe Biden’s administration, the IRA aims to reduce carbon emissions by approximately 40 per cent by 2030 and promote investment in domestic energy production and manufacturing.

Great news for the planet. Not so good news for trade partners. The act is stuffed with $369bn of subsidies and tax breaks promoting green technology.

They include new tax credits to promote carbon capture, clean hydrogen and investment in clean energy technologies and to mitigate greenhouse gas emissions — all areas in which the UK (and the EU) want to develop industrial expertise.

Even wind turbines, electric vehicles and solar panels will need to be substantially made in the UK.

The EU has already heard a sucking sound this year as investors and manufacturers flee the bloc’s high energy costs and low subsidies for the New World and its vast treasures.

Brussels and Washington have set up a task force, which meets weekly to find ways in which the EU could get better treatment.

Ursula von der Leyen, commission president, at the weekend said that even if that were possible, the bloc needed to look at pumping more money into its own green industry and loosening state aid rules. These limit government bungs to prevent richer countries giving their companies an unfair advantage.

What does this mean for the UK? To be fair, the government is alive to the threat. Badenoch spoke in November at the rightwing Cato Institute and expressed concern about Joe Biden’s new law.

“We know this was a strategic step to protect the US economy and we also know that there’ll be many people in DC, and across the country who support it.

“But it’s important these measures don’t conflate longstanding allies and partners like the UK, with those other countries that might want to damage US interests,” she said.

That is of course code for China. It has a long history of subsidising business and blocking imports to build up its own industry. China is home to around 80 per cent of electric vehicle battery production worldwide, for example, and a growing share of the car assembly industry too.

Trade lawyers are clear that the US act breaches World Trade Organization trade rules by conditioning subsidies on local manufacturing and excluding imports.

But even Brussels is reluctant to bring a case against the US when it needs its support in the struggle against Russia.

David Henig, trade expert at the European Centre for International Political Economy, said the UK was naturally squeezed between the world’s three big power blocs — the US, EU and China.

“There is not a lot the UK can and should do about the Inflation Reduction Act,” he told me. “We have opted out of being a global rulemaker.”

“If the WTO is no longer important and the world is heading protectionist we cannot compete on subsidies. We have to compete on stability, smart regulation and predictable rules.”

I will leave it to UK commentators to judge how that is going.

But Rishi Sunak’s government is at least trying, and making common cause with the EU, according to officials. It has joined other US allies such as Japan, Canada and South Korea in making representations.

The Department for International Trade said it was “disappointed” Washington had adopted policies “that will harm British businesses and impact global supply chains in batteries, electric vehicles and wider renewables.

“Protectionism that impacts friends and allies isn’t the answer to the global challenges we face, and risks disrupting industries that are essential for all of us if we want to reach net zero.

“The trade secretary has raised the issue with the Biden administration and senior representatives of both parties, and we continue to call on immediate action to reassess the impact of these discriminatory tax credits.”

Biden has promised to “tweak” the act in its implementation phase but it comes into force on January 1 and time is running out.

EU trade commissioner Valdis Dombrovskis left Washington after talks this week “more optimistic” than when he arrived, he said.

The most hopeful signals come in the field of electric vehicle subsidies.

Under the IRA a $7,500 tax credit for EVs is only available for models assembled in the US and with batteries using materials from countries with which the US has a free trade agreement.

But Biden clarified this point last week after a meeting with French president Emmanuel Macron at the White House. “That was added by a member of the United States Congress who acknowledges that he just meant allies; he didn’t mean, literally, free trade agreement. So there is a lot we can do,” the president said.

EU officials also point to an article which exempts commercial vehicles from the local content rules. That could include vehicles consumers lease over several years.

The UK car industry has been lobbying the government to push for similar concessions.

Mike Hawes, chief executive of the Society of Motor Manufacturers and Traders, told me: “The UK and US automotive industries have a longstanding and productive relationship, supporting jobs and vehicle manufacturing across the Atlantic. Measures that support free and fair trade between us should, therefore, be encouraged, rather than those that seek to protect individual markets.

“[The] SMMT is in dialogue with the government to ensure that UK-made electrified vehicles, batteries and critical components continue to compete fairly in the US market and support the administration’s target that half of all new vehicle sales should be covered by these technologies by 2030.”

I will be tracking developments elsewhere in the FT over coming days.

Kemi Badenoch also said in her Cato Institute speech that the “trope” that the UK was retreating from the world was completely untrue.

“I voted to leave the European Union and I saw Brexit as a once in a generation opportunity for the UK to embrace the world. And trade was — and still is — at the heart of that,” she said.

She then added: “So why does it feel like everyone is becoming more protectionist?”

To some extent because they are. While President Joe Biden has reversed some policies of his “America First” predecessor Donald Trump he has added some of his own in an increasingly strong rivalry with China.

The EU responded to Trump and Beijing with a slate of new unilateral trade defence measures which are now coming into force.

The Covid pandemic, followed by the Ukraine war which has driven up the cost of food and fuel, also led to trade restrictions.

Trade experts warn not of deglobalisation but fragmentation, with the globe divided into blocs that trade with each other, but less so with midsized unattached countries such as the UK or New Zealand.

The World Trade Organization warned this week of the rise in trade-restrictive measures.

Out of the 78 export restrictive measures on food, feed and fertilisers introduced since the start of the war in late February, 58 are still in place, she said, covering roughly $56.6bn of trade.

Some restrictions were eased too but overall trade got less free in the past year.

Badenoch in her speech made clear that protectionism was rising because of uncertainty and fear of job losses.

“So if we are going to make people feel less protectionist, we’re going to have to make them feel more secure first. And we need to show how free trade and free markets, when done properly, do provide security.” That is a big job.

Carmakers have warned that the price of many electric vehicles made or sold in the UK and Europe could jump 10 per cent or more from 2024 after Brussels said it would not extend tariff exemptions agreed in the Brexit trade deal.

Do you really want to live to be 100? If you answer yes you are in the minority, like Sarah O’Connor. The FT’s employment columnist points out that although life expectancy is rising, healthy life expectancy is in decline, and since Brexit, especially in the UK.

The current dispute about Northern Ireland’s trading arrangements with the EU and UK has stirred the same neuralgia that surrounded the granting of statehood to the six most northern counties a century ago, writes Philip Stephens.

Chart of the Day: Trading Broadcom’s Conflicting Trends According to Risk Aversion