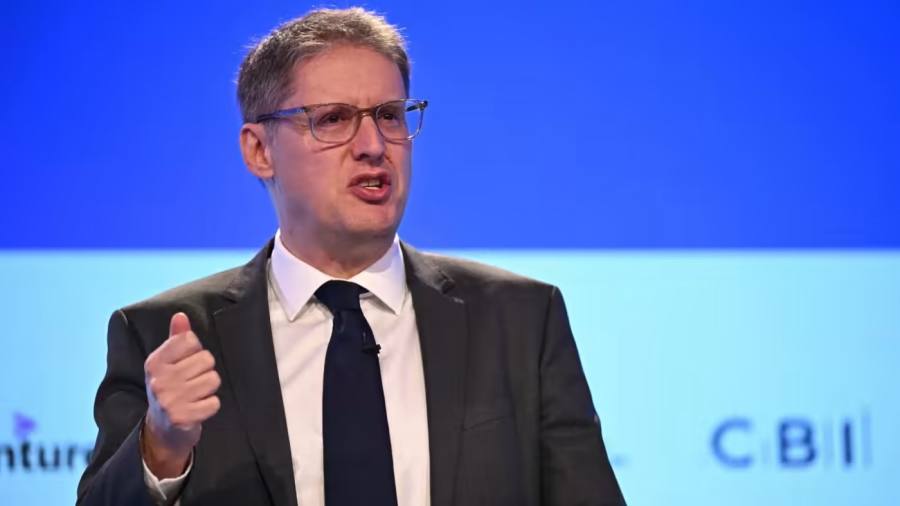 The UK will fall into a year-long recession in 2023 as the “stagflation” combination of rising inflation, negative growth and plummeting business investment weighs on the economy, according to Britain’s largest business group.

The CBI warned that gross domestic product would fall by 0.4 per cent in 2023, a downgrade from its previous forecast of 1 per cent growth set in June. It said consumer spending would drop throughout the year as inflation remained above the Bank of England target.

The lobby group gave a particular downbeat forecast on business investment, which it said would start to fall from the middle of next year when an existing “super deduction” tax allowance scheme designed to boost investment came to an end.

Business investment is expected to be 9 per cent below pre-Covid pandemic levels by the end of 2024 — equivalent to about £5bn.

CBI director-general Tony Danker warned: “[Companies] see potential growth opportunities, but a lack of ‘reasons to believe’ in the face of headwinds are causing them to pause investing.”

The economic outlook for the UK is among the weakest of the advanced nations covered by the CBI forecast, with only GDP in Germany set to fall at a slightly faster pace next year.

1. Europe cuts gas demand by a quarter Provisional data from commodity analytics company ICIS showed gas demand in the EU was 24 per cent below the five-year average last month, following a similar fall in October, in the latest evidence that the bloc is succeeding in reducing its reliance on Russian energy since Moscow’s invasion of Ukraine.

4. Court paves way for sale of Gupta’s Belgian steel plants Sanjeev Gupta could lose control of his steel plants in Belgium after a court in the city of Liege last week upheld a request by workers at his Liberty Steel subsidiary to start restructuring. The court appointed a legal representative to oversee the sale of two plants at Flémalle and Tilleur.

5. Report calls for crackdown on UK asylum seekers UK home secretary Suella Braverman has welcomed a report by a centre-right think-tank calling for a major crackdown on asylum seekers who come to Britain using illegal routes. The report says “if necessary” the UK should withdraw from the European Convention on Human Rights to tackle the problem.

Economic indicators S&P Global releases its November composite purchasing managers’ index for the EU, services PMI for Russia and composite PMI with Cips for the UK. In the US, ISM publishes its non-manufacturing PMI.

WHO meeting The World Health Organization convenes in Geneva to review a new pandemic accord.

St Nicholas Eve The Netherlands celebrates the night before Sinterklaas.

Cricket England and Pakistan face off on the last day of their first Test match in Rawalpindi.

FT Person of the Year: Volodymyr Zelenskyy Written off by many before the February invasion as something of a joke, the 44-year-old president of Ukraine embodies the resilience of his people and has become a standard bearer for liberal democracy. He has earned a place in history for his extraordinary display of leadership and fortitude.

‘I do wish our students were more resilient about nasty remarks’ As she prepares to step down this month Louise Richardson, the vice-chancellor of Oxford university, talks to Henry Mance about cancel culture, state schools, why universities should not be businesses and the need for free speech.

How Sam Bankman-Fried blurred lines between FTX and Alameda In an interview with the Financial Times, the FTX founder said he had walled himself off from trading and risk management at the Alameda Research trading firm, which he majority-owned, but also admitted to closer involvement than he had previously disclosed. “We kind of lost track of positional risk,” he said.

The hunt for the next market fracture With soaring inflation, rising rates and fiscal shocks sucking liquidity out of markets and sudden price moves provoking vicious margin calls and forced sales, where will the next shock come from? Here are the corners of the market that policymakers and investors are watching closely.

The 4-day week: does it actually work? Some 70 UK companies, encompassing 3,300 employees, signed up to a trial of the four-day week, with researchers at Cambridge university, Boston College and Oxford university measuring the impact of a shorter week on productivity and wellbeing. Here’s what four companies discovered.

Rather than restoring a house “perfectly”, restore it to imperfection. Pristine is passé — and there’s a new, sustainable aesthetic that showcases the scars of the past while preserving a building’s history and collective memory.

Brazil Approves Use Of Bitcoin As Payment – Bitcoin Magazine