It doesn’t seem like the right time to bet on companies that are a pure economic play. There is a growing possibility that the global economy will slip into a recession next year as the aggressive work through the economy and slow demand.

Yet, despite macroeconomic risks, shares of the global shipment delivery companies—FedEx (NYSE:) and United Parcel Service (NYSE:)—have produced a powerful rebound during the past month, signaling that they have hit bottom in the current market downturn.

These global freight and logistics giants touch many industries, from consumer goods to pharmaceuticals, and a rebound in their stocks after a steep decline offers a silver lining. So, if you’re looking to add one of these players to your portfolio right now, you have to decide between these two competitors and their growth prospects. Below is a deeper look:

FedEx Is Going Through a Deep Restructuring

The Memphis, Tennessee-based FedEx is trying to win investors’ confidence these days after its business lost momentum as the pandemic-driven surge in delivery demand waned.

The biggest challenge for the company is to contain costs and improve its margins in this highly environment. FedEx told investors in September that it plans to cut as much as $2.7 billion of costs over the next 12 months to offset sagging package volume, especially at the Express unit.

In this hostile macroeconomic environment, FedEx is also struggling to overcome operational inefficiencies, which have kept its costs higher and the share price depressed. Unlike UPS’ One Network, FedEx’s ground business is operated by independent contractors, while its express business owns aircraft and vehicles and has employees and pilots directly on its payroll. 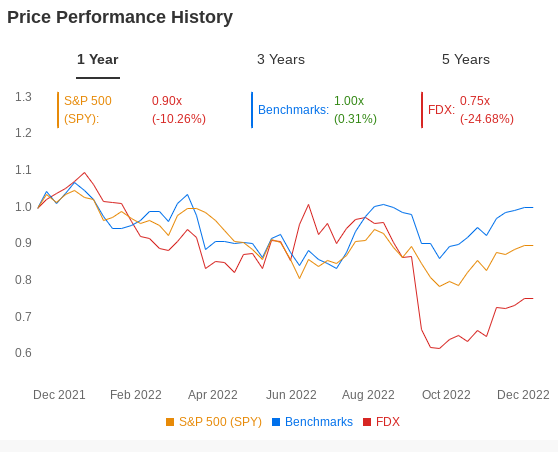 These structural issues have kept investors skeptical about FedEx and its investment appeal. Even before the current weak economic spell, FedEx has had a history of disappointing investors. In its fiscal year 2019, the last full year before the pandemic hit, the company set guidance, raised it, and then cut it twice.

The previous year, FedEx introduced an adjusted earnings target, lowered it, and then raised it twice. In fact, in nine of the ten years that FedEx has set an annual earnings-per-share goal for the entire year, the company has cut the target at least once.

The company’s new CEO, Raj Subramaniam, is trying to address these issues as part of a deal with an activist investor, D.E. Shaw. To keep investors happy, he hiked FedEx’s quarterly dividend by more than 50%, restructured its board of directors, and promised deep cost cuts.

Despite these encouraging signs, FedEx is no more a growth play. In fact, FDX’s new restructuring plan clearly indicates a greater portion of targeted profits will come from cost savings and less from growth.

For these reasons, I see FDX facing greater pressure ahead if the economy takes an ugly turn, especially when the company is going through a major turnaround. FDX’s current evolution will take time, measured in years, not quarters.

UPS, on the other hand, is in much better shape. The company has consistently shown that its model is better prepared to deal with economic cycles.

Over the past many years, UPS has improved its underlying earnings quality. In the most recent quarter, its margin expansion in the U.S. domestic package was impressive, despite facing similar cost pressures that kept FedEx margins depressed.

UPS has been able to increase its revenue-per-piece by 23% since 2019 and translate that growth into higher earnings — thanks to superior ground operations and better cost management. UPS is also planning to make more changes internally, such as introducing more automation in its sorting facilities, to keep profit margin growth. Due to this outperformance, UPS has a great score on InvestingPro’s models that analyze companies’ financial health. 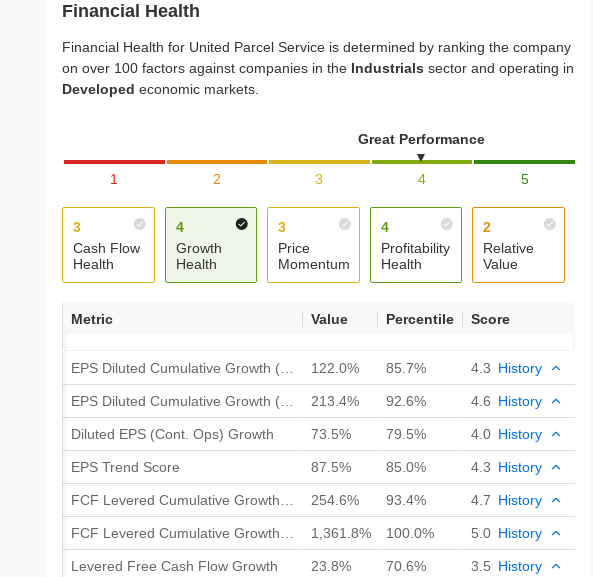 Highlighting this strength, analysts at Deutsche Bank recommended buying UPS stock in a recent note, saying the macroeconomic risks are already reflected in the stock’s current price. Their note adds:

Deutsche Bank upgraded UPS to buy from hold and lifted the bank’s price target to $220 from $197 a share. The new target implies an upside of 20% from Monday’s trading value of $184.26.