Stocks in emerging markets extended their recent recovery and posted the strongest gain in a wide-ranging bounce for the major asset classes for the trading week through Friday, Dec. 2, based on a set of ETFs.

Vanguard Emerging Markets Stock Index Fund () surged 4.9%, building on the ETF’s recovery off its late-October low. The recent rise in this corner of global markets is partly the perception of over-sold conditions that traders decided went too far. The question is whether these markets will continue to stage a recovery?

Part of the calculus is deciding if the Federal Reserve’s interest rates, which affect the price of money around the world, are nearing a pivot.

“It does seem like the Federal Reserve may stop hiking interest rates, which has led to inflows into emerging markets. Things get priced in ahead of time, and there’s a fear-of-missing-out effect when people start to see prices moving.”

“We see grounds for a recovery in emerging markets. First, we expect to see the conditions for the dollar to weaken, which is always a helpful starting point. Global growth recovers from its low point in the first quarter through to the end of the year, led by emerging economies.”

Perhaps, but it’s not yet obvious that VWO’s price trend has recovered from the bear market of late. The next several week’s will be a test of whether the recent rebound is noise or the start of a new bull market for these battered shares. More generally, traders will be looking for confirmation that the October low will hold. On the upside, sentiment will improve if VWO can break above its recent peak of roughly $42.

Meanwhile, it’s notable that all of the major asset classes posted gains last week. As a result, the Global Market Index (GMI.F), an unmanaged benchmark, maintained by CapitalSpectator.com, rose for a second week. This index holds all the major asset classes (except cash) in market-value weights via ETFs and represents a competitive measure for multi-asset-class-portfolio strategies. 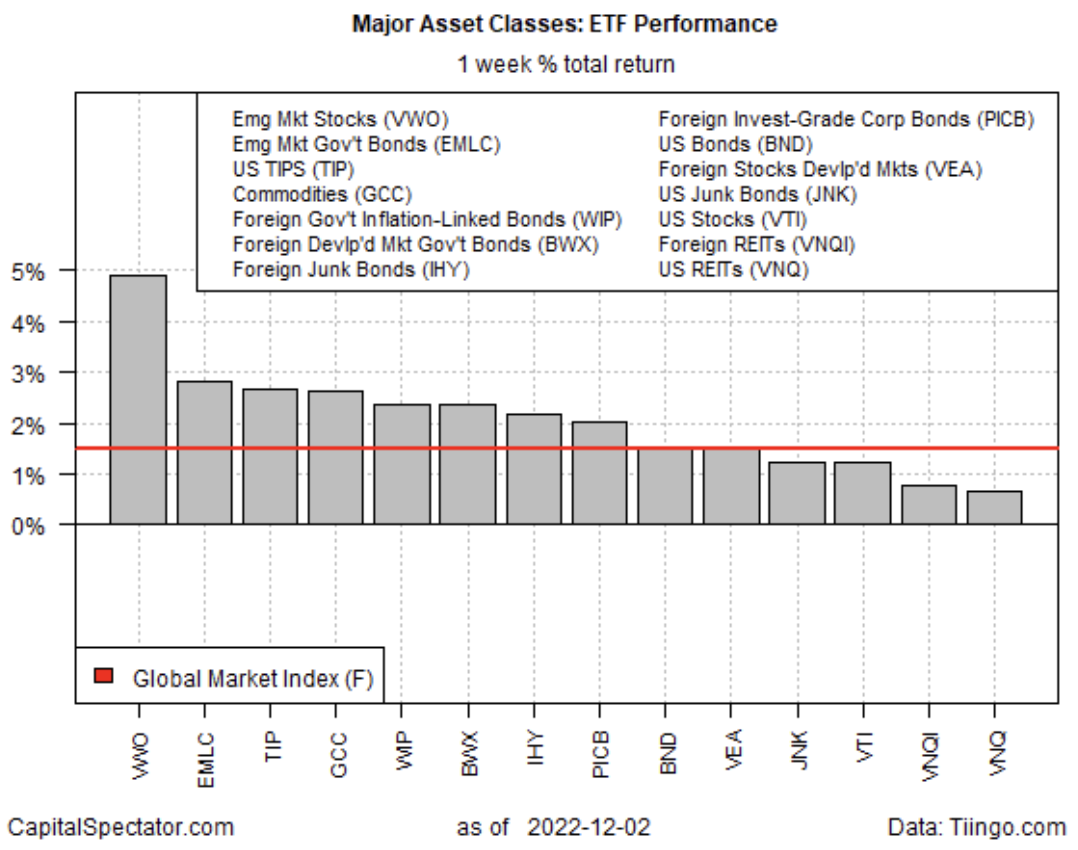 For the one-year trend, commodities markets (GCC) are the upside outlier, posting the only gain for the major asset classes over the trailing 12-month window.

Not surprisingly, the widespread losses for the past year continue to weigh on GMI.F’s one-year performance, which closed down 11.9% on Friday vs. the year-earlier price. 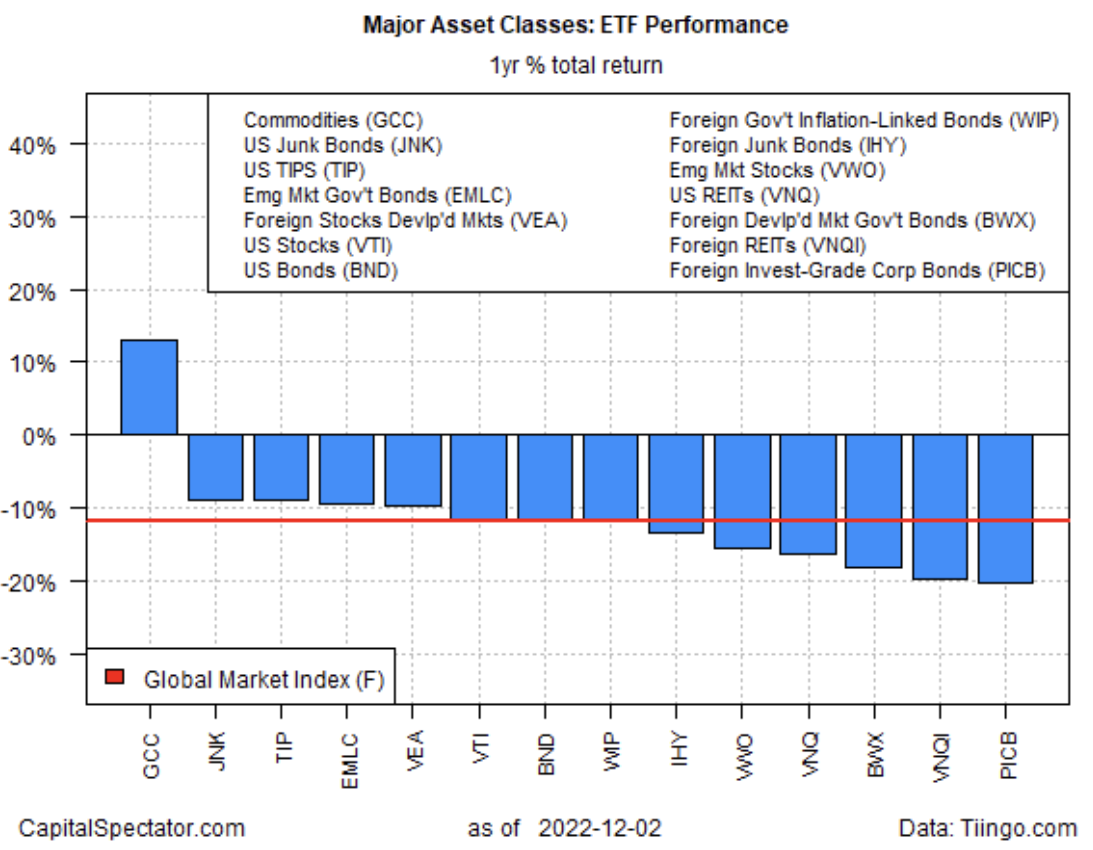 Comparing the major asset classes through a drawdown lens still reflect steep declines from previous peaks for most markets. The softest drawdown at the end of last week: inflation-indexed Treasuries (), which closed with a 9.9% peak-to-trough decline. The deepest drawdown: foreign corporate bonds (PICB), which ended the week with a 26.1% slide below its previous peak. 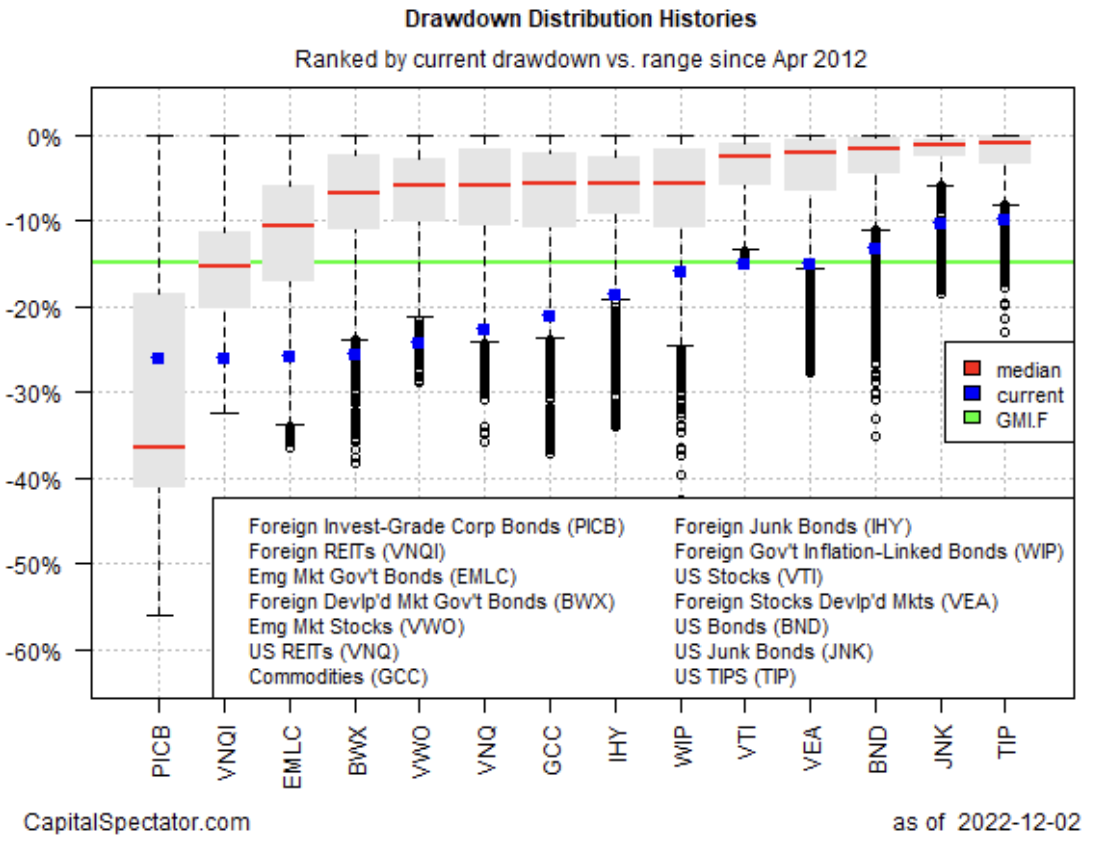