US president Joe Biden’s offer to fix provisions in his flagship climate package to help US allies is a “breakthrough” that will help mollify European anger over potential damage to its own green technology companies, said French finance minister Bruno Le Maire.

Le Maire was speaking after French president Emmanuel Macron pressed Biden during a three-day state visit to Washington to consider the harms the law known as the Inflation Reduction Act could have on the EU. Macron had cast the $400bn worth of incentives to fund the US green transition as “super-aggressive against European companies” and risked “fracturing the west” by unfairly skewing competition.

But Macron and the US president had made significant progress in their talks over the IRA, said Le Maire, and officials would now work closely on the details in the coming weeks.

“I really think the state visit . . . is a turning point,” he told the Financial Times.

One particular sore point has been subsidies for electric cars manufactured in the US, which the EU, South Korea, Japan and the UK have all criticised as being discriminatory against their companies and in violation of World Trade Organization rules.

Speaking at a joint press conference on Thursday, Biden said he was open to addressing EU concerns since the US intention had not been to damage the region, nor to exclude allies. Rather, the IRA was aimed at boosting US supply chains to reduce reliance on Chinese products in clean energy and electric cars, he explained.

“There are tweaks that we can make that can fundamentally make it easier for European countries to participate or be on their own, but that still needs to be worked out,” Biden said.

Biden mentioned one potential change: reworking a provision in the act that grants exceptions on locally made content rules to allow subsidies on EVs and renewable energy tech so long as the country concerned has a free trade agreement with the US.

“That was added by a member of the United States Congress who acknowledges that he just meant allies; he didn’t mean, literally, free trade agreement. So there is a lot we can do.”

Le Maire said such a change would represent an important win for Europe and help ensure the region’s companies could stay competitive in the race to a lower-carbon economy.

“It’s a major breakthrough to say: they’re our allies, they’re our friends, so even if we don’t have a trade deal with Europe, we’re going to consider European components the same way as those from countries with a trade deal,” he said.

“It’s not an adjustment, it’s an important political choice” by the Biden administration, he added.

It remains to be seen how such a change would be put into effect, given there is little chance of the IRA legislation itself being reopened or amended. French officials suggested it should be possible through executive orders by the president or via regulations that lay out how the law should be applied.

The White House declined on Friday to comment further on the specific changes being considered. “The president was clear there are ways we can address Europe’s concerns. This is a matter we are working out through substantive consultations with our European partners,” the White House spokesperson said. “We won’t get ahead of that process.”

A task force formed by US and EU officials will continue to meet to work through issues with the IRA, and the matter will also be addressed at a meeting of the US-EU Trade and Technology Council on Monday. 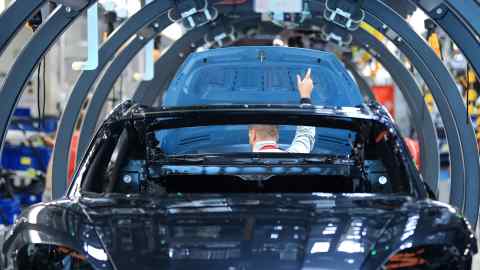 Asked whether Macron had threatened Biden with taking the matter to the World Trade Organization, Le Maire said he did not have to do so since the two countries’ strategic objectives were the same — to build strong industries in green technologies.

“Nobody wants a trade war in the situation we’re in,” he said, alluding to the war in Ukraine and the economic fallout from rising energy prices.

“We have one competitor called China. The strategic goal of the United States, it seems to me, is not to weaken Europe but, on the contrary, to work in partnership with Europe.”

Bitcoin Will Not Submit To Black Swans – Bitcoin Magazine