We could call it gloomy 2022. Not only for the retail investor but also for the richest people in the world.

The economic situation has highlighted the volatility of tech stocks, which have consequently destabilized the wealth performance of numerous personalities due to their fortunes being tied to the companies they lead.

In particular, topping the list of the most “damaged” billionaires is Mark Zuckerberg, who has seen his wealth erode by about $100 billion following Meta’s downtrend, which has shed more than 65% since January 2022. He is closely followed by Elon Musk, who remains the world’s richest man, but is second in the ranking of the most struck this year, with losses of over $85 billion. Then comes Jeff Bezos, who dropped to fourth place in the overall wealth ranking after losing over $72 billion.

The same applies to cryptos. and other altcoins are now often referred to as “nothing more than other tech and growth stocks.” In some ways, this makes sense because their value is shifted “forward” (long duration and new technology yet to be used flatly). Since many believe it is yet to be discovered, its intrinsic value is quite different from that given by the market.

And the correlations of these months have been there to justify it. 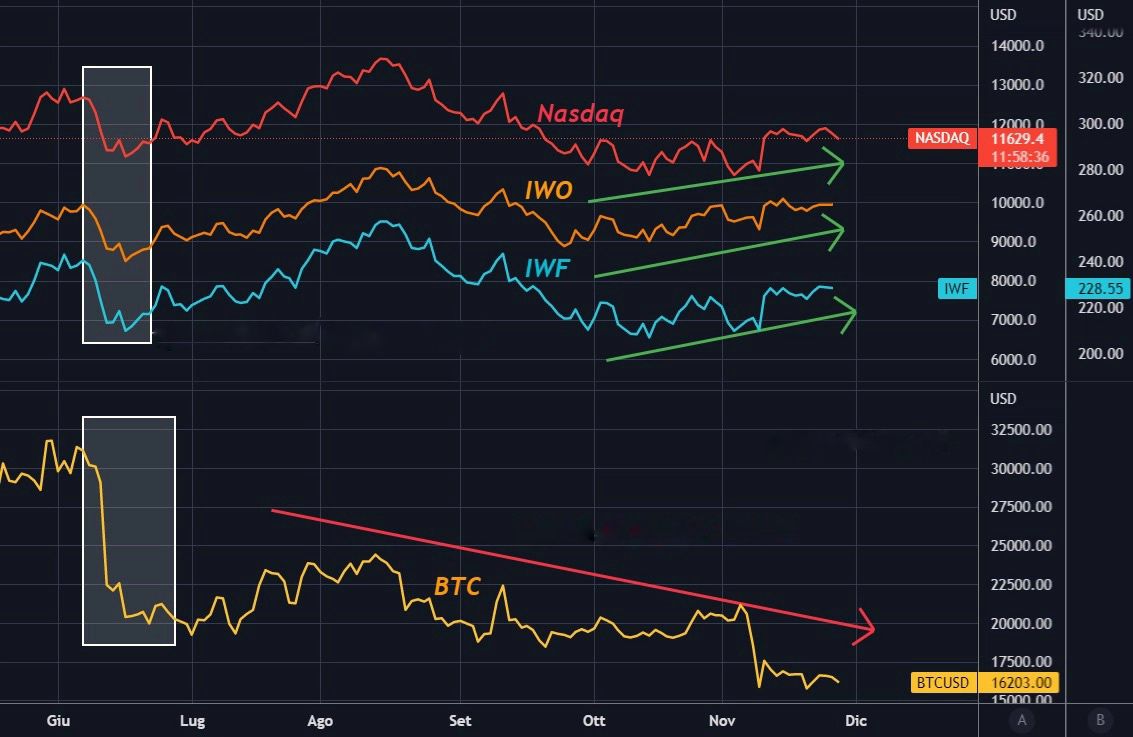 But something has changed. The divergence we have seen lately, in part due to the collapse of several platforms (such as FTX), stands out. In fact, we can see that crypto-related growth stocks, regardless of market capitalization, are maintaining their June lows by showing more strength.

Everyone, or almost everyone, thinks that the essence of investing is diversification, which is essential for long-term success. It is usually said to spread capital over dozens of assets to protect against risk. However, Warren Buffett often speaks of the virtue of holding concentrated positions. 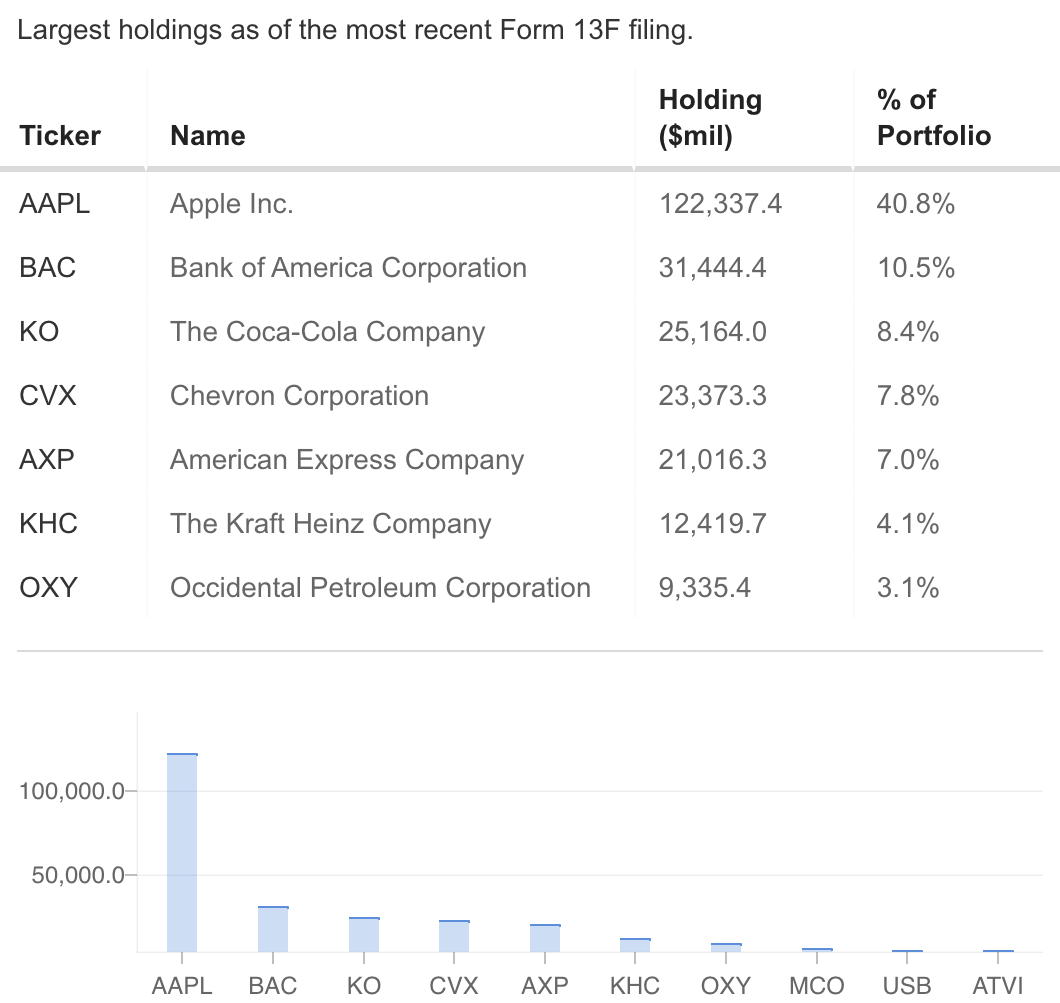 Looking at the first positions in his portfolio Berkshire Hathaway (NYSE:), we notice how diversification is seen in a totally different way; he is 40% invested in only one financial stock— Apple Inc (NASDAQ:)—while the other positions are markedly smaller. BRK also holds positions in private companies.

Note that products have a relatively low-profit margin (+36% gross) while related services generate +72% because they can easily scale marginal costs. It also has an operating cash flow of $122 billion, a balance sheet of $169 billion, and a debt of $120 billion. 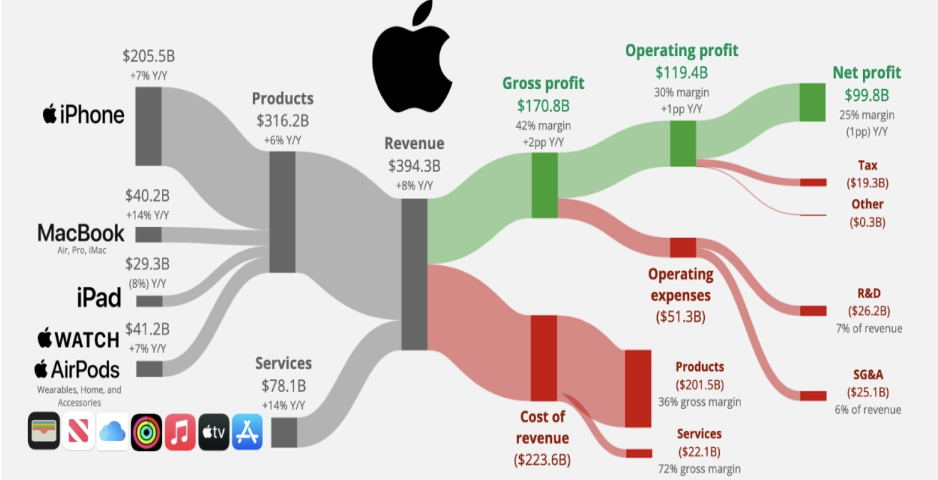 According to market forecasts, the smartphone industry could grow at a CAGR of 7% by 2027. It is well known that Apple has done better and outperformed competitors and the entire industry.

That said, diversification appears within the company. Obviously, this does not mean putting 30%-40% of savings in Netflix (NASDAQ:) or Meta Platforms (NASDAQ:) shares because they have lost over 60% of their value since January 2022, unless one understands and agrees with the nature of their businesses over the long term.

One must consider that companies that are leaders in their industry are “loved” by consumers. Furthermore, they have a simple business, brand recognition, and can raise prices without losing customers.

And increased its holdings in:

One of the main focuses of the Oracle of Omaha was energy. Due to geopolitical issues and the imbalance between supply and demand, oil and natural gas will remain at high prices.

What’s more, it is increasing its position in hardware-oriented tech stocks. Not only Apple and HP (NYSE:) but also Taiwan Semiconductor Manufacturing Co. The latter’s shares are down about 40 percent (currently at the same levels as in September 2020), and Buffett’s purchase makes sense since there is, and in the near term, will be a huge demand for “silicon” that is used to make chips, renewables, auto components, IoT and mobiles.

TMSC is also the supplier of chips used by Apple, so it is also seen as an extension of Apple’s business.

In light of the above, can we say that a winning strategy is to value a few stocks in uncorrelated sectors, paying attention to the beta value?

The greatest virtue that leads investors to diversification is risk protection. By buying dozens of stocks, it is true that you reduce the risk of a single stock, but you are still not protected from “systemic” risk when everything goes down. In fact, a classic 60/40 portfolio (stocks/bonds) is ending the year with a double-digit decline for the sixth time in the last 95 years. 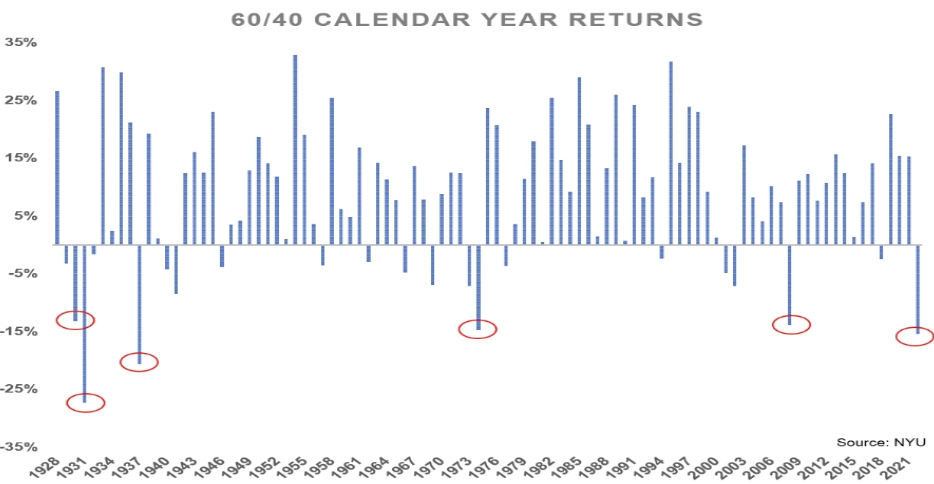 Again, we can confirm that no one is immune to systemic risks.

Also, you have to keep in mind (if you are building your portfolio with a 7-10 year view) that “long-term” returns are the only ones that ultimately matter, and decades tend to make up for bad losses with a well-defined strategy.

But how much more is the market discounting? Where are we at?

The easiest way is to analyze the bond sector.

Why? The rise or cut in interest rates by Central Banks affects, before anything else, bond issues, which are often convenient for the investor to lock in his capital in bonds rather than have it stagnate in the current account while also benefiting from interest (this is liquidity shifted forward).

The ETFs, taken individually, are performing negatively in both cases. While from the chart, we can see that the ratio between the two shows, after months of underperformance by the TLT Etf, that the latter has reversed the trend by going upward relative to the SHY Etf. From this, we infer that investors are already discounting a rate cut confirming that current policy is seen as favorable to holding longer-duration bonds. This is referred to as “interest rate risk,” in short, it corresponds to the possibility that changes in interest rates will reduce the value of the cash flow offered by the bond (coupons, par, or redemption value).

In addition, is flashing negative signs. Why is it important?

Copper is considered an economic indicator due to its industrial propensity and the fact that it is used in many applications and products in construction, home appliances, and electric vehicles. Consequently, the greater the demand for copper, the stronger the economic and industrial activity.

Comparing it to —considered a precious metal, i.e., a cash alternative—can show us (again) investor sentiment and the state of the global economy.