A little over two years ago, Alibaba (NYSE:) hit an all-time high above $300. Incredibly, since then shares have plunged by more than 75%. 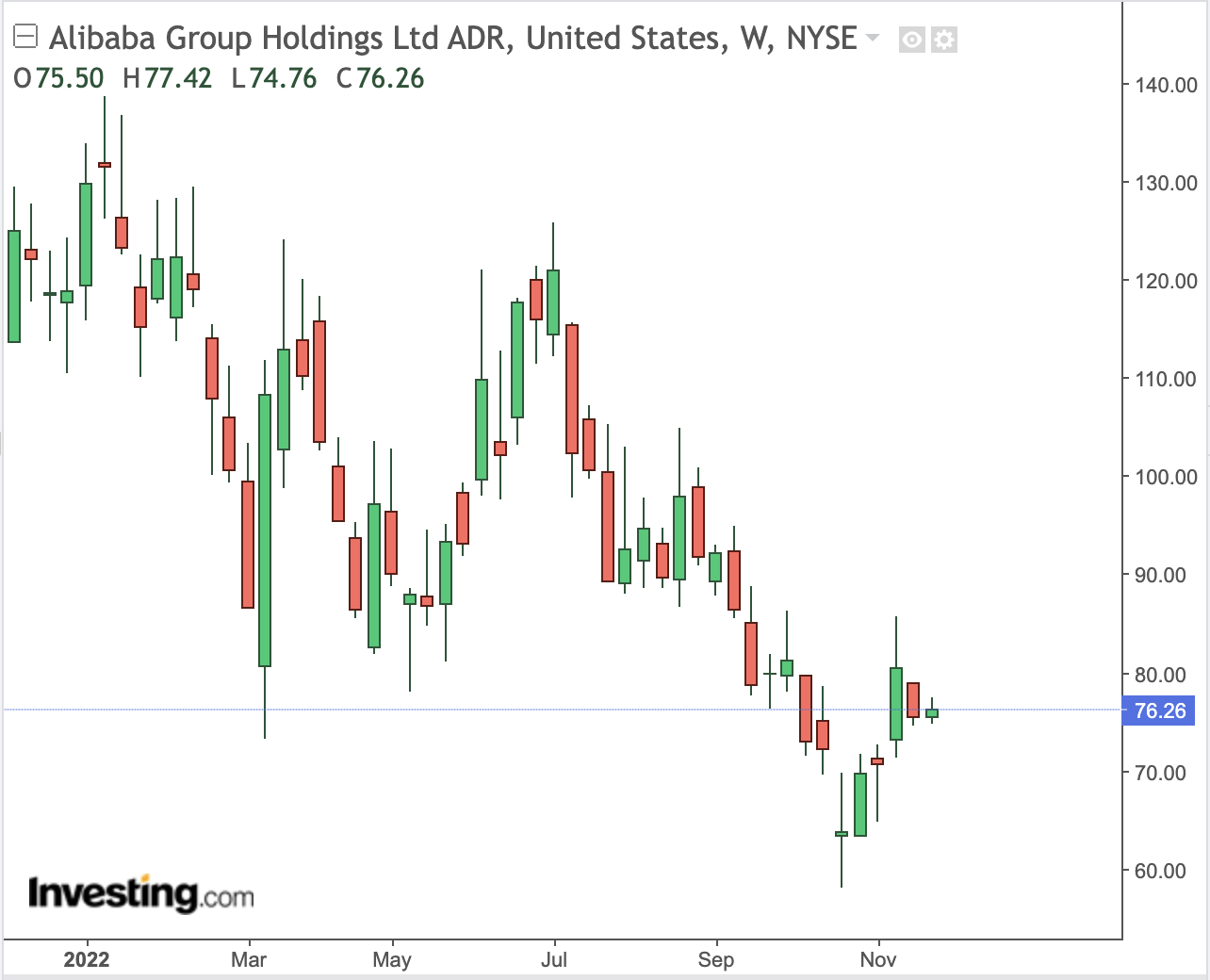 As a result, BABA shares look incredibly cheap. They trade at barely 10x this year’s consensus estimates on earnings per share. That valuation, in turn, has fed a narrative that short-term considerations — among them COVID lockdowns in China and a more nervous market — have created a hugely attractive buying opportunity.

That narrative could prove to be correct over the long haul — but it doesn’t cover the entire story. The plunge in BABA has been driven by more structural factors as well, factors that aren’t necessarily going to fade away soon, if ever.

In that context, BABA might be too cheap at 10x earnings, but the plunge here does have at least some logic to it. And events over the past few weeks show both why the plunge has happened — and why bulls believe that, at some point, it will reverse.

Looking solely at BABA from a fundamental perspective, there’s one significant and obvious problem: the company’s revenue growth has decelerated markedly.

Obviously, external factors are at play, most notably COVID lockdowns that have spread across the country and dampened customer demand. But other Chinese e-commerce leaders are facing the same pressures — and posting better results.

The conclusion investors are drawing is that Alibaba is losing market share. Pinduoduo is winning in smaller cities. JD has built out an impressive logistics network. And, all else being equal, a company losing market share is usually going to receive a relatively low earnings multiple, if it doesn’t necessarily have to be quite this low.

Will The CCP Take Profits?

There’s also the steady drumbeat of news suggesting that the Chinese central government is not going to allow Alibaba to maximize its profits.

Certainly, the central government has made its presence known of late. Alibaba unit Ant Financial reportedly faces a fine of more than $1 billion, after its plans for a public listing were scrapped two years ago. The same reports suggest that Ant also must share its valuable data with the government.

With protests against lockdowns in the country becoming more frequent, the Chinese Communist Party no doubt needs to offer some carrots to its populace. Redistributing even more of the profits generated by Alibaba and its peers could provide a way to tamp down unrest.

And Yet…There Is A Bull Case

But short-term factors are at play here. There’s no doubt that Alibaba’s revenue and profits are being depressed by lockdowns. The company still managed to grow earnings nicely in the most recent quarter, and when normalcy inevitably returns, top-line growth should allow profit increases to accelerate further.

For that reason, in the context of the external environment — which also includes macroeconomic concerns surrounding a potential property bubble — an investor reasonably could see the most recent earnings report as bullish. It probably can’t get much worse, after all. Taking the long-term view, then, BABA stock should be a buy.

Again, that case may prove to be correct. But, personally, I’d rather take on the external risks with businesses that are performing better at the moment. And that doesn’t even include the VIE structure I highlighted earlier this year, a structure that keeps owners of U.S. ADRs (American Depositary Receipts) in a potentially tenuous legal position.

All told, I’m personally skeptical BABA is quite cheap enough. But I’ll also admit that, at this point, reasonable investors can disagree.

Disclaimer: As of this writing, Vince Martin has no positions in any securities mentioned.