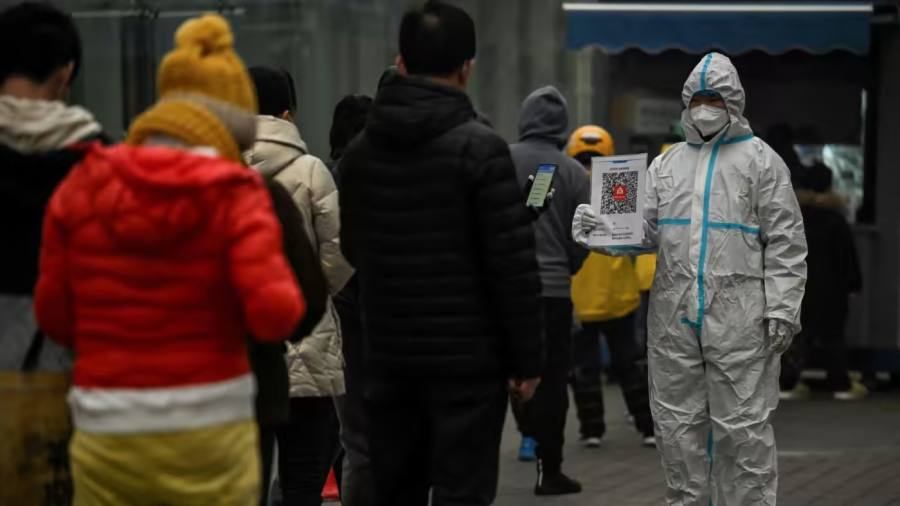 Covid-19 cases in China are spiralling towards record highs, forcing officials to again lock down large swaths of the country.

The world’s second-biggest economy reported almost 28,000 new Covid cases yesterday, with outbreaks in Beijing, the southern manufacturing hub of Guangzhou and the southwestern metropolis of Chongqing continuing to grow.

The country’s battle to suppress the virus has battered China’s economy, disrupting global supply chains and threatening world growth. Almost three years after Covid first hit the city of Wuhan, vaccination rates among vulnerable sections of China’s population lag behind those in many rich countries, while its continued use of lockdowns as a primary method of disease control has made it an international outlier.

Officials in Beijing shut most non-essential businesses in the city’s largest district, Chaoyang, which has a population of 3.4mn, and have closed restaurants and other entertainment venues in much of the city, while telling residents to work from home.

“We have witnessed one of the most abrupt and difficult collapses in the history of corporate America,” James Bromley of Sullivan & Cromwell told a US court.

2. Iran to expand nuclear enrichment programme Iran has announced an expansion of its nuclear enrichment programme, in a provocative response to a rebuke by the UN’s watchdog over the alleged existence of undeclared nuclear sites. The head of the Atomic Energy Organization of Iran on Tuesday said it had added the underground Fordow facility to the list of locations where it was enriching uranium to the 60 per cent purity level, just below weapons grade.

3. Russia threatens to restrict gas flows to western Europe Gazprom, the state-backed Russian gas pipeline monopoly, accused Ukraine yesterday of taking gas meant for Moldova from lines running through the country, and warned that it may reduce supplies from November 28.

4. Chinese kids’ addiction to gaming ‘resolved’, says industry body China’s top gaming industry association, which is associated with the government’s gaming regulator, declared that the problem of children’s video gaming addiction has been “resolved”, the clearest signal so far that Beijing will ease its curbs on the approval of new titles.

5. US strengthens Manila security ties with VP visit US vice-president Kamala Harris visited the Philippine island of Palawan on the edge of the disputed South China Sea on Tuesday, in a bold demonstration of how Washington and Manila are reinvigorating their security alliance as they guard against an increasingly assertive Beijing.

PMI data S&P Global manufacturing and services purchasing managers’ index data will be published for Australia, the EU, France, the UK and the US. Analysts also expect the eurozone PMI to contract even as its economy expanded in the third quarter.

US Federal Reserve meeting minutes Minutes from the central bank’s November meeting, due to be released today, may provide further clues on the outlook for monetary policy.

UK Supreme Court decision on Scottish referendum A ruling is due today on whether the Scottish parliament can call a second independence referendum without the approval of the UK’s Westminster government.

World Cup match The Japanese men’s team will kick off against Germany at 4pm local time in Doha.

Clothing piles up at Bangladesh warehouses Orders in the world’s second-largest garment exporter have slowed amid the war in Ukraine and rising inflation. And the downturn in global clothing demand comes as Bangladesh contends with higher prices for imported gas, leading to power cuts that have hit some garment producers.

There’s a deepening mental health recession Employee assistance programmes face a swelling wave of complex mental health problems brought to them by people with nowhere else to turn. What’s behind the increase? Sarah O’Connor explores.

Vietnam tops tech growth market index Vietnam’s digital economy is set for compound annual growth of 8.9 per cent between 2022 and 2026, the fastest of any of 51 countries surveyed in the FT-Omdia Digital Economies Index.

Sam Bankman-Fried and the power of dressing badly Clothes are always a costume, a mask. And there is no costume more traditional or more stagy, for people in power, than the costume of indifference, writes Robert Armstrong.

Have a go at our crossword puzzles. If you want a real challenge, take on our cryptic crossword. And you can catch up on Roger Blitz’s helpful guide here.

Q3 Earnings Season Wraps Up With a Look at Retail

How to Powell-proof your economy, per the Bundesbank