After Best Buy Earnings, Shares May Look Like a Bargain Following 45% Plunge


• Best Buy’s stock has lost more than 45% over the past 12 months as demand for electronic products has declined
• One notable difference between Best Buy and other big-box retailers is that the company has been able to manage its inventory levels quite well during this downturn
• Best Buy’s earnings report, due out Tuesday, will provide insight into whether the worst is over in its sales slump

It’s hard to feel excited about a retailer that sells computers and other electronic gadgets these days: Demand for products like these is waning as consumers face pressures on their wallets due to nearly four-decade-high inflation.

Consumers also have little appetite to buy laptops and gaming consoles after a two-year pandemic buying spree of products like these when they were confined to their homes.

These changing consumer preferences and a tough economic environment have hurt the largest U.S. brick-and-mortar electronic retailer, Best Buy (NYSE:), whose stock has lost more than 45% during the past 12 months to underperform the S&P 500 Index. It closed on Friday at $72.05 a share.

The Richfield, Minn.-based retailer, which is scheduled to report its latest quarterly earnings on Tuesday, will again come under the scrutiny of investors, who will be looking for clues as to whether the worst is past for Best Buy’s sales slump.

As the below graph shows, sales estimates for Best Buy have fallen sharply over the past 12 months. Analysts have reduced this quarter’s expectations by 53% for EPS, from $2.17 per share to $1.02 per share. 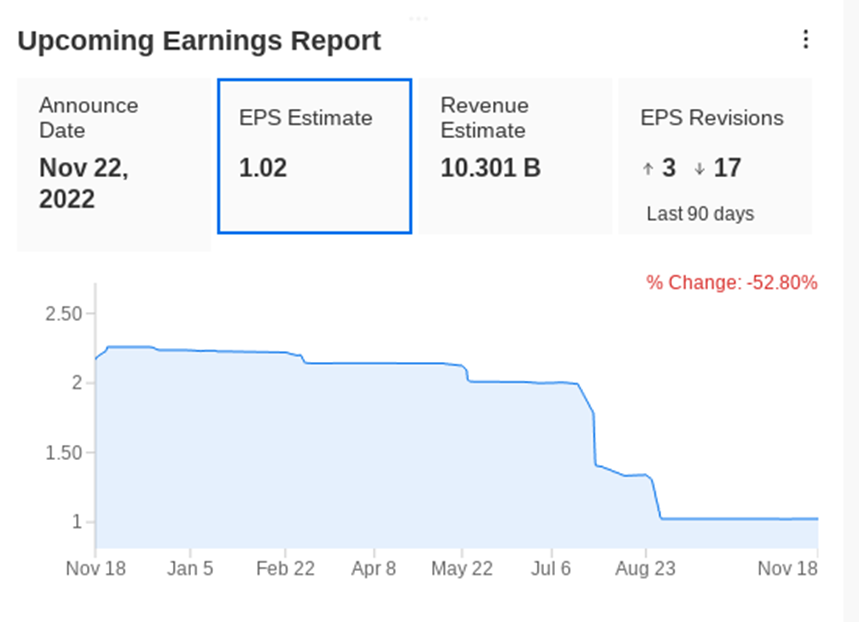 The next question is whether such a massive adjustment makes BBY a bargain. One notable difference between Best Buy and other top retailers that I see is that the company has been able to manage its inventory levels quite well during this downturn.

Its inventories at the end of the second quarter were approximately flat compared with the year-earlier period. That’s a big difference from Walmart (NYSE:), Target (NYSE:), and Gap Inc (NYSE:), all of which have a glut of unwanted inventory weighing on profit margins.

Due to better forecasting of demand, Best Buy will be in a better position in the crucial holiday season, when retailers fight for higher foot traffic. Best Buy’s latest guidance also suggests that the decline in its sales is closer to bottoming out.

Best Buy in late August reiterated its recently lowered profit and sales forecast for the year while noting that comparable sales will be down “slightly more” in the third quarter than they had been in the second quarter.

This steady outlook suggests that the worst for BBY stock is behind it, and that now is a good time to take advantage of the share weakness that has pushed its dividend yield near its highest level in five years. 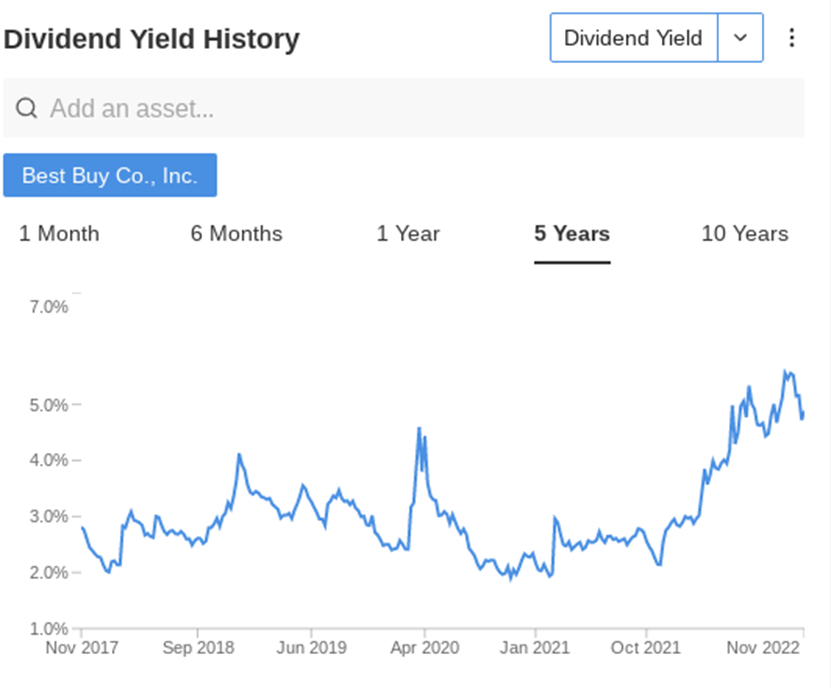 Recent numbers from other retailers also show that the drop in consumer demand isn’t as dire as earlier feared. U.S. retail sales posted their biggest increase in eight months in October, indicating demand for goods is broadly holding up.

Also, the various models generated by InvestingPro+, which value companies on factors like price-to-earnings (P/E) multiples and enterprise value, signal that BBY stock may have sizable upside potential after a considerable pullback. Best Buy’s stock now trades at a forward price-to-earnings ratio of just 10x. By comparison, Target – which faces similar headwinds – trades at 15x its forward-earnings multiple. 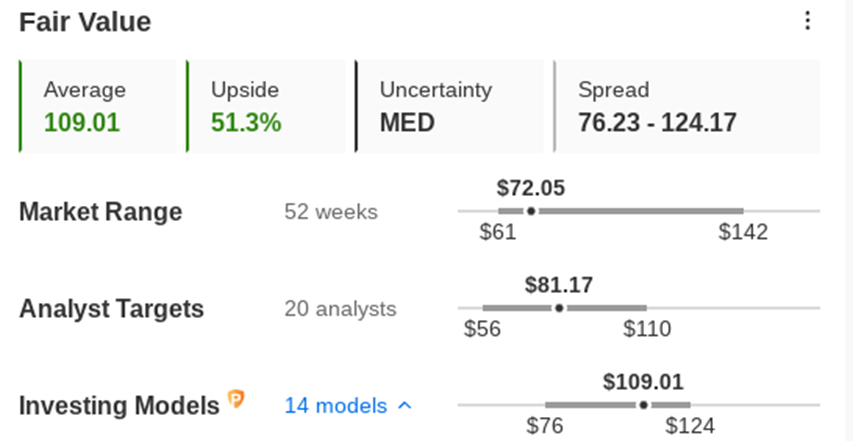 With this attractive earnings multiple, Best Buy is better prepared to deal with economic headwinds this time around. Even before the pandemic spike in spending on discretionary items, the company was producing impressive growth. Over the past decade, the retailer has improved its inventory systems, invested heavily in its online capabilities, reorganized its stores, and opened up spaces for major brands to display their products.

The current environment, in which consumers are cautious about spending on discretionary items, is certainly challenging for Best Buy and its peers. But the company isn’t in bad shape in terms of its ability to deal with these pressures. Its inventory level is manageable, and its cash position is strong. Its low valuation and high dividend yield, therefore, present an opportunity for long-term investors.

Disclosure: As of the time of writing, the author doesn’t own BBY stock. The views expressed in this article are solely the author’s opinion and should not be taken as investment advice.

Interested in finding your next great idea? InvestingPro+ gives you the chance to screen through 135K+ stocks to find the fastest-growing or most undervalued stocks in the world, with professional data, tools, and insights. Learn More »

Looking for a Bottom in Global Equity Markets

How the world’s biggest miner hopes to profit from the…