TJX Companies (NYSE:), best known for T.J. Maxx, Marshalls, and HomeGoods stores, has been one of the top performers in the dismal retail sector this year as consumers migrate to off-price discount chains in search of value.

Amid worries over the rapid surge in inflation and growing recession fears, customers appear to prefer shopping at retailers that offer bargains and discount deals.

That has served as a boon for TJX, as the price-conscious chain’s off-price model is competitively positioned to navigate an economic downturn. With over 4,700 stores in nine countries, including the U.S., Canada, UK, Ireland, Germany, Austria, the Netherlands, Poland, and Australia, TJX provides a wide selection of well-known designer brands at a deep discount, offering cash-strapped consumers a “treasure hunt” shopping experience.

The Framingham, Massachusetts-based company has outperformed the broader market by a wide margin this year, gaining 2.7%. In contrast, the SPDR S&P Retail ETF (NYSE:)—which tracks a broad-based, equal-weighted index of U.S. retail companies in the S&P 500—is down 28.7% over the same timeframe, while the is off by 17%.

Shares rose to a new all-time high of $79.40 on Wednesday, above the prior record of $77.35 from Jan. 4. TJX ended Thursday’s session at $77.99, earning the discount clothing and home decor chain a market cap of $90.5 billion. At current valuations, TJX is the largest off-price retailer in the world.

From a technical standpoint, TJX recently staged a strong breakout of its downtrend from August through October, with shares currently above all daily and weekly trendlines.

While most retail stocks have struggled in the face of a worsening macroeconomic outlook, TJX has proven it can endure the current economic environment as it benefits from changes in consumer behavior due to inflationary pressures causing disposable income to shrink.

A Terrific Q3 Despite Macro Challenges

Despite several macro challenges, TJX held up relatively well in the three months that ended in October, with its U.S. stores driving results.

The bargain retailer reported third-quarter of $0.86 per share, topping consensus estimates, which called for a profit of $0.80 a share, thanks to disciplined cost management.

TJX recorded $12.20 billion in net sales during the quarter, down 3% from last year and slightly below forecasts of $12.29 billion. Revenue at its key Marmaxx segment – which includes the T.J. Maxx, Marshalls, and Sierra stores – grew 3%, driven by solid apparel sales. The division is the company’s biggest revenue driver.

Meanwhile, TJX’s U.S. comparable same-store sales fell ‘only’ 2% in the October quarter, better than expectations for a much sharper decline of 4.4%. Considering the challenging operating environment during the quarter, this wasn’t such a bad outcome overall.

“I am very pleased with our third quarter performance. U.S. comparable store sales exceeded our expectations, and overall pretax margin, merchandise margin, and earnings per share were strong.

(…) Across our geographies, our values and exciting, treasure-hunt shopping experience continued to resonate with consumers throughout the quarter.”

TJX also gave upbeat guidance for the current quarter, which covers the key holiday shopping season, offering further evidence it has done a better job of navigating through the challenging environment than its major competitors, such as Ross Stores (NASDAQ:), and Burlington (NYSE:).

“Looking forward, while not immune to macro factors, we are convinced that our flexible business model and value proposition will continue to be tremendous advantages, as they have been for more than four decades and through many kinds of retail and economic environments.”

Meanwhile, the off-price department store retailer boosted its outlook for U.S. comparable store sales and is now planning them to be flat to up +1%. This suggests that the company is continuing to grab market share against a choppy macro backdrop, according to analysts at Goldman Sachs.

TJX has proven over time that it can sustain a slowing economy and still provide investors with higher payouts. The discount chain returned $843 million to shareholders in Q3, mainly through share buybacks and dividend payouts.

The recent dividend hike marks the eighth time in the past nine years in which TJX has paid more in annual dividends than in the previous year, with the exception of 2020 due to COVID. 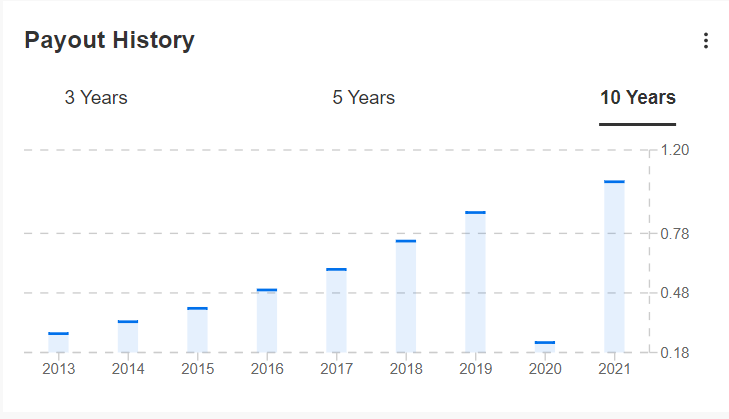 I believe that TJX’s market-topping dividend will keep growing in the foreseeable future, underlining the retailer’s commitment to returning capital to shareholders.

In addition, the company expects to repurchase $2.25 billion to $2.5 billion of common stock this fiscal year.

Taking all this into consideration, TJX remains a compelling name in the retail space, given its resilient business model, which has enabled it to weather the current slowdown better than its peers.

Moreover, the off-price retailer’s upbeat financial performance and strong outlook for the months ahead offer further evidence that its business is withstanding the retail storm much better than most of its brick-and-mortar peers as it continues to gain market share at the expense of its reeling competitors.

Wall Street has a long-term bullish view on TJX stock, with 24 out of 25 analysts surveyed by Investing.com rating it as either ‘buy’ or ‘hold’. Shares have an average analyst price target of around $84, representing an upside of roughly 7.8% from current levels. 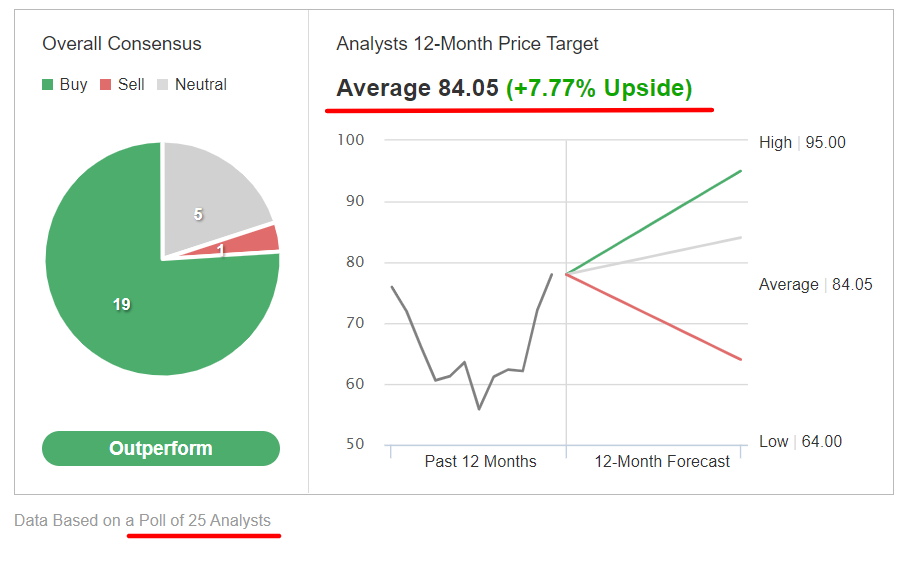 Similarly, the average fair value for TJX’s stock on InvestingPro according to a number of valuation models implies 12.9% upside from the current market value over the next 12 months. 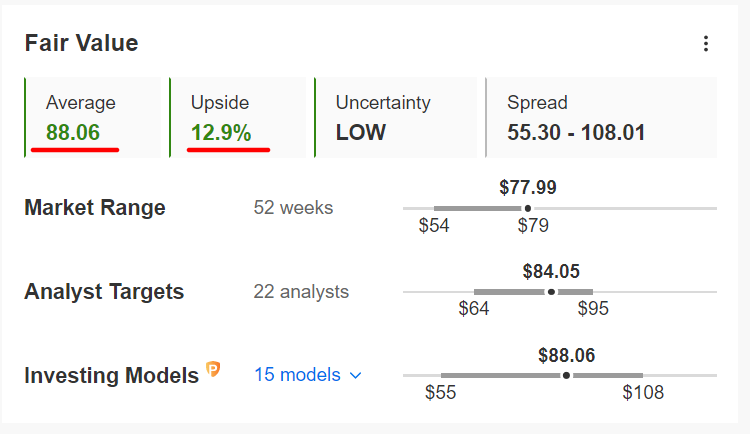 Disclosure: At the time of writing, Jesse is long on the Dow Jones Industrial Average and the S&P 500 via the SPDR Dow ETF (DIA) and the SPDR S&P 500 ETF (SPY). He is also long on the Energy Select Sector SPDR ETF (XLE).

The views discussed in this article are solely the opinion of the author and should not be taken as investment advice.