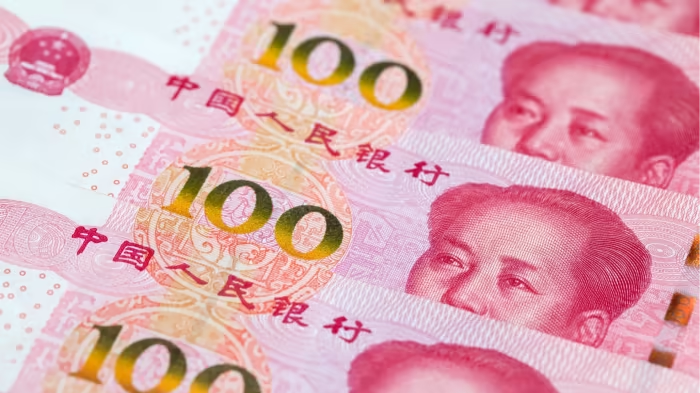 China’s renminbi fell to the lowest level since 2008 yesterday as the country’s central bank holds back from intervening to prop up the currency in response to the rallying dollar.

The renminbi is the latest major currency to succumb to a wave of dollar strength that has sent exchange rates from the pound to the yen spiralling lower this year.

As the People’s Bank of China pursues monetary easing to shore up economic growth, continued policy divergence with the hawkish US Federal Reserve is expected to push the Chinese currency down further.

The PBoC has so far stopped short of deploying significant foreign exchange reserves, instead relying on indirect measures to discourage bets on continued falls and slow the pace of depreciation.

The onshore exchange rate for the currency fell 0.7 per cent to Rmb7.2268 on Wednesday, bringing it 13.8 per cent lower for the year to date.

Thanks for reading FirstFT Asia. Here’s the rest of today’s news — Emily

1. Bank of England launches £65bn move to calm markets The Bank of England took emergency action yesterday to avoid a meltdown in the UK pensions sector, unleashing a £65bn bond-buying programme to stem a crisis in government debt markets.

2. India bans leading Muslim group over terrorism accusations India’s prime minister Narendra Modi has outlawed the Popular Front of India and its affiliates for five years, accusing it of links to terrorist organisations. The move, which followed the arrests in recent days of more than 200 of its members and searches of top leaders’ houses and offices, is likely to foment the country’s deepening communal tensions.

3. EU vows response to ‘deliberate’ pipeline sabotage Norway is deploying the military to oil and gas installations and the EU vowed “a robust and united response” to “deliberate” leaks in two gas pipelines between Russia and Europe. Nato and a growing number of European governments said they believed the leaks were a case of sabotage, while Moscow has denied involvement.

5. UK in ‘difficult’ talks over access to India’s financial sector Lord Mayor of London Vincent Keaveny acknowledged in an interview with the Financial Times that India might reject British calls to ease its tight restrictions on foreign financial services firms.

Kuwait parliamentary election The sixth vote in 10 years, which is set to be held today, is a product of the political crises that have rocked the country in the past decade. (Barron’s)

Porsche begins trading Shares in the carmaker will begin trading on the Frankfurt stock exchange after the long-awaited flotation of the luxury car brand.

The soaring value of my second-hand Toyota There’s a silver lining to the fact that the global shortage of semiconductors remains unresolved and broader disruption in the parts and materials supply chain continues. As a result, Leo Lewis found that his Toyota dealer would offer 10 times the expected value to trade in his car — as AI shapes a booming second hand market.

Why the strength of the dollar matters In times of trouble, the dollar is the world’s refuge. Messing up macroeconomic policies, especially fiscal management, proves particularly dangerous when the dollar is strong, interest rates are rising and investors seek safety. Kwasi Kwarteng, please note, writes Martin Wolf.

The 90km journey that changed the Ukraine war A lightning assault by Ukrainian forces this month allowed Kyiv to reclaim as much territory in a few days as Moscow had captured in months. Our interactive story traces how the counteroffensive dramatically turned the tide of the invasion.

Biden’s renewables push to deliver big benefits to South Korea There was consternation in Seoul when President Joe Biden eliminated subsidies for electric vehicles assembled outside of North America. But what amounts to a short-term setback pales in comparison with the benefits likely to be accrued by Korea Inc overall, writes Christian Davies.

Deflecting asteroids is only one thing on our worry list Nasa’s mission to slam a small asteroid 11mn km from Earth was, literally, a striking achievement that gives hope we can defend our planet. But human nature and technology present risks of their own, writes Anjana Ahuja.

Dame Prue Leith’s Gloucestershire house is a real showstopper. Leith and her husband John Playfair were never going to go monochrome when they built their dream Gloucestershire home. For this story we went inside the Bake Off star’s technicolour home.