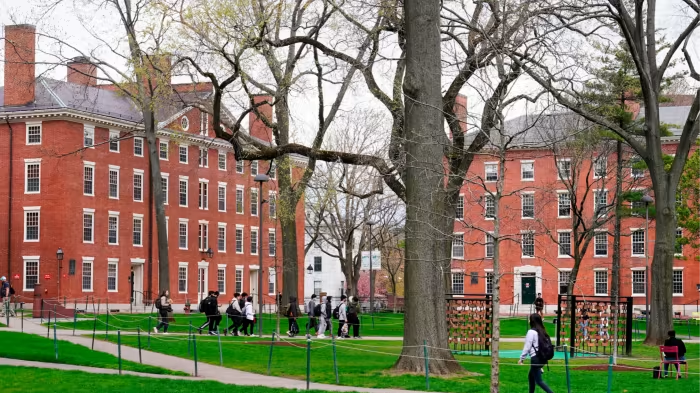 Joe Biden’s plan to forgive thousands of dollars of student loan debt for millions of Americans will cost more than $400bn over three decades, the non-partisan Congressional Budget Office has estimated.

The price tag was revealed by the CBO yesterday in a letter to Republican lawmakers who had requested an assessment of the plan’s budgetary impact. The US president last month announced his executive action to cancel the student debt.

Progressive Democrats cheered the student loan forgiveness scheme as a way to provide relief for millions of Americans saddled with student debt. It would cancel up to $10,000 in debt for those earning $125,000 or less.

However, it was heavily criticised by Republicans and some moderate Democrats for potentially stoking inflation at a time when prices were already high and adding to the country’s fiscal burden.

The White House, which has been coy about releasing its own fiscal assessment of the plan, defended the policy, saying it gave young people an opportunity to increase their savings and put money down on a house.

Thanks for reading FirstFT Americas. Here is the rest of the day’s news — Gordon

1. Bank of England intervenes to calm currency markets The pound edged higher this morning after a co-ordinated intervention by the Bank of England and the Treasury late yesterday to restore confidence in the UK economy.

2. China growth to fall behind rest of Asia for first time since 1990 The World Bank revised down its 2022 gross domestic product forecast for China and said output in the world’s second-largest economy would lag behind the rest of Asia for the first time since 1990. In April the World Bank forecast China’s economy would grow between 4 and 5 per cent this year but now thinks that figure will be below 3 per cent.

3. Apple expands iPhone production in India Apple has begun producing its iPhone 14 model in southern India less than a month after it was launched, as the company works to diversify its supply chains out of China and expand production in India. The production shift by one of the largest companies in the world will be seen as a win for India’s prime minister Narendra Modi and his “Make in India” campaign.

4. Investors rush for Porsche shares Volkswagen is set to raise €9.4bn from selling a stake in sports car maker Porsche, in one of Europe’s largest ever IPOs. The shares were priced yesterday and trading will begin in Frankfurt tomorrow after investors rushed to buy the shares. They will be priced in a range of €76.50 to €82.50 a share, valuing Porsche at more than €75bn.

5. Nasa successfully smashes satellite into asteroid in first deflection mission A Nasa spacecraft has smashed into an asteroid in a spectacular first test of deflection technology that could in future divert the path of an incoming space rock to prevent a cataclysmic collision with Earth. A spectacular series of images shows the 600kg Dart projectile closing in on the peanut-shaped Dimorphos asteroid just before the moment of impact.

Monetary policy Federal Reserve chair Jay Powell is set to speak on a panel discussing digital assets hosted by the Bank of France, but his colleagues are expected to take on topics more directly related to the current health of the US and global economy. St Louis Fed president James Bullard is set to speak on the US economy and monetary policy and take part in a panel at an event hosted by the International Monetary Policy Forum in London. Chicago Fed president Charles Evans is expected to speak about the future of the US economy at a hybrid event at the Official Monetary and Financial Institutions Forum in London. Meanwhile, San Francisco Fed president Mary Daly is scheduled to speak today on innovation and central banking at her bank’s symposium on Asian banking and finance.

US housing Investors should get more clues on the health of the domestic property market. Home prices are expected to have risen 0.2 per cent in July from the previous month, according to an index of 20 US cities compiled by Standard & Poor’s and Case-Shiller. That may signal a slowdown in home price appreciation owing to the impact of rising mortgage rates, but should leave prices 17 per cent higher from a year ago. Separately, data for new home sales are forecast to show a drop to 500,000 in August from 511,000 in July.

Antitrust lawsuit against airlines The government’s antitrust lawsuit against two of the biggest airlines in the US will begin today. Last year, the US justice department and attorneys-general in six states and the District of Columbia sued to block Jet Blue’s “Northeast Alliance’‘ with American Airlines, which consolidated the airlines’ operations in Boston and New York City. The government alleges that the alliance threatens competition for travellers in Boston, New York and across the country.

Back-to-office push hits US workers with inflation shock As US business leaders work to lure employees back into offices this autumn, they have hit an unexpected roadblock: inflation. Some workers now say remote working is simply more economical than going into the office as companies try to lure them back.

“I lose money every single time I leave my house,” said Lina Tumanyan, a real estate broker whose office is in Manhattan.

Social media campaign keeps John Fetterman at front of Pennsylvania’s Senate battle Despite health problems that have stopped him campaigning in person, a carefully orchestrated social media strategy has helped propel John Fetterman into an early lead in Pennsylvania, one of this year’s most competitive Senate races.

Two arrested on fraud charges linked to ‘$100mn deli’ in New Jersey A New Jersey sandwich shop which became a symbol of stock market exuberance was at the centre of an international conspiracy that defrauded investors and wrecked the ambitions of two high schoolteachers, according to an indictment unsealed in US federal court yesterday.

Far-right Meloni taps into Italians’ wish for radical change Political pranks and bold use of social media helped propel Giorgia Meloni and her Brothers of Italy party to victory in Sunday’s election. But analysts say the firebrand is a wild card politician with a capacity for unconventional surprises. Rome correspondent Amy Kazmin looks at what the rightward shift in Italy means for the country and its allies.

Russians run and hide from Putin’s zealous draft officials Nearly a week after President Vladimir Putin announced the “partial” mobilisation of army reservists to bolster his forces in Ukraine, tens of thousands of Russians are refusing to enlist. In the face of the civil disobedience, the Kremlin is faced with a dilemma: should it crack down on the dissenters or backtrack?

Young entrepreneurs are capitalising on TikTok and Instagram’s marketing potential to build successful businesses. Their personal, playful and almost grassroots events contrast sharply with pop-ups by mainstream brands — and help lure in long queues of teens.

Bitcoin Maximalists Do Not Trade For Bitcoin – Bitcoin Magazine