Although US futures have managed to bounce back after a bruising few days, there’s no fundamental—or indeed technical—justification for a market bottom yet. Thus, expect the downtrend to resume.

More on the fundamentals later, but given the lower highs and lower lows, and not to mention all the other bearish technical indicators, I continue to prefer looking for short setups on the indices than long, even if the markets are a bit oversold in the short-term outlook.

With that in mind, I reckon there is a good chance the and European markets will be unable to hold onto their gains, or at best move significantly higher from current levels. 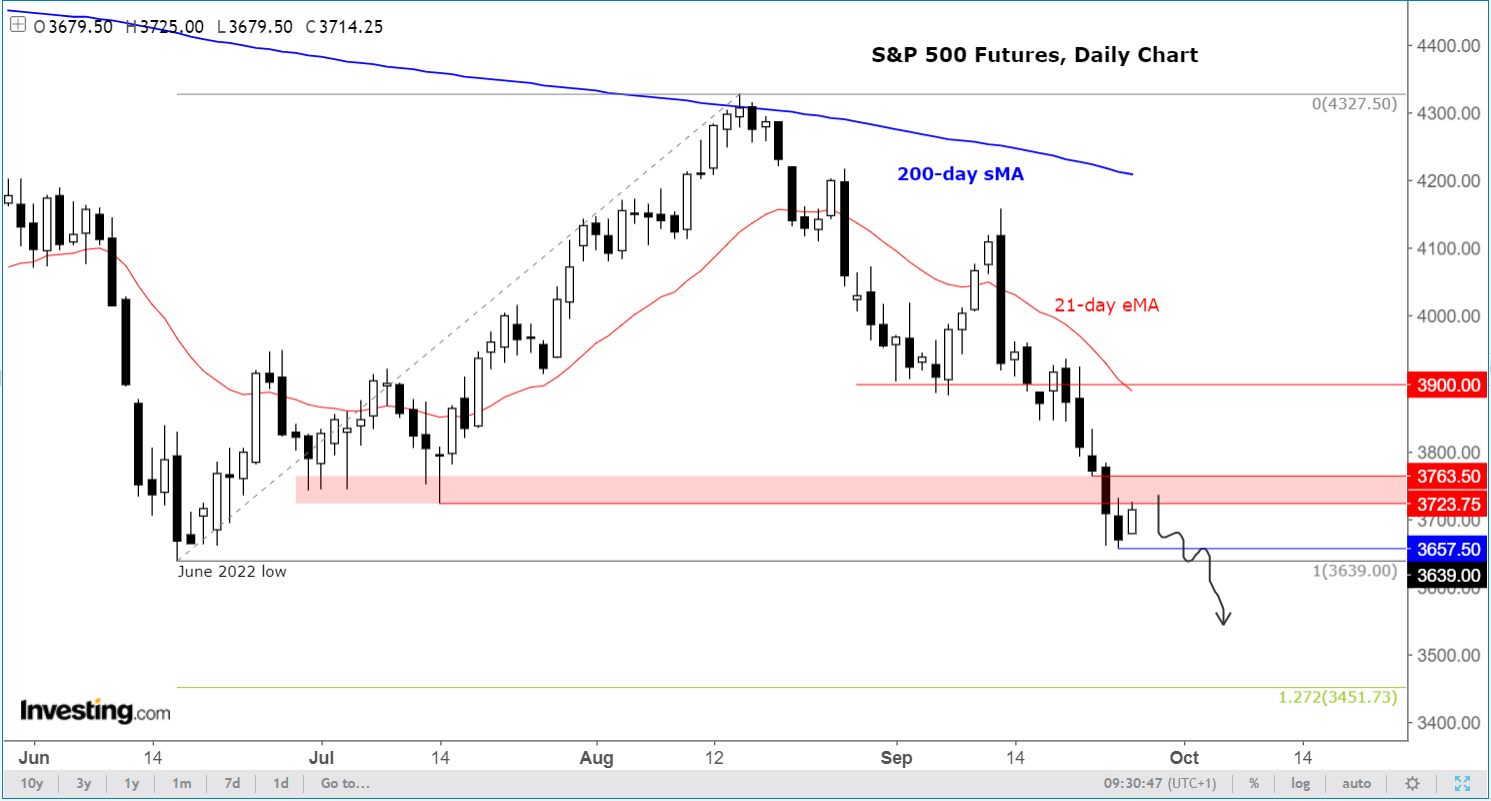 In fact, following this morning’s rebound, the S&P 500 futures have now arrived at a key short-term resistance area, with the base of which coming in at 3723 (see shaded area on the chart). Previously this area was support in mid-July. But following the sell-off on Friday, this area is now going to be the first line of defence for the bears.

With the already making a new low for the year, it is likely that the S&P and would follow suit. Thus, as a minimum, I reckon the S&P futures are headed below the June low of 3639, where people buying at “support” yesterday will have placed their stop orders. A run on these stops in a sharp move is what is likely to happen next. So, watch out below!

If the S&P breaks and holds below that summer low, then we could see fresh technical selling in the days to come, with the index then possibly making a move towards the 127.2% Fibonacci level at 3452 next.

Prior to today’s small rebound, the markets had been falling for 5 consecutive days. While some might be tempted to look at opportunistic long trades from short-term oversold levels, it is clear that the bigger and more frequent moves have been to the downside. We are in a bear trend, so it is best to go with the flow than against it.

I am not a perma bear, it is just that there are no sound fundamental reasons for investors to pile in on the long side just yet.

For the markets to bottom out, either stock prices will have to get even cheaper to warrant the risk, or something has to change fundamentally. Right now, central banks around the world, led by the US Federal Reserve, are tightening their monetary policies aggressively, while concerns about the health of the global economy continues to rise. What’s more, you have emerging market currencies imploding, while currencies of some of the top economies are hitting either multi-decade lows or in the case of the , new all-time lows. The slumping foreign exchange market is only going to exacerbate the inflationary problems in those nations and hurt demand for US exports.

Disclaimer: The author currently does not own any of the instruments mentioned in this article.