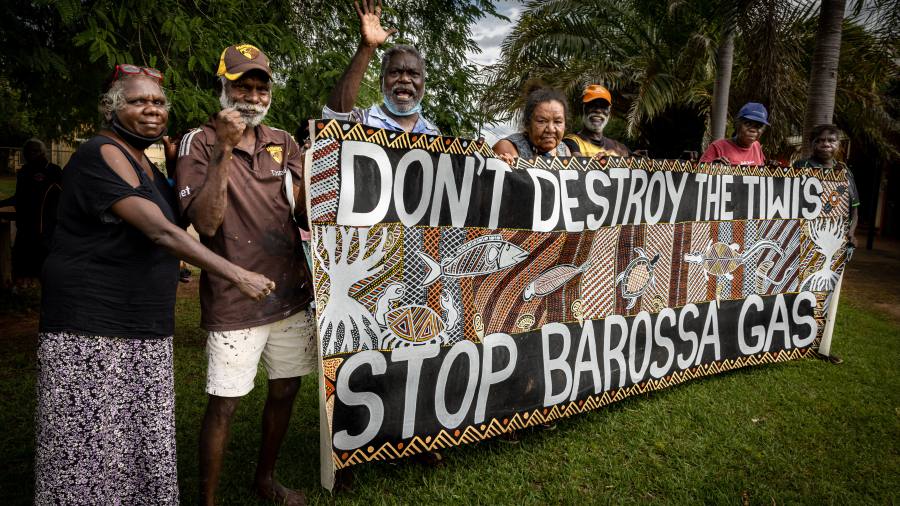 
The 2,000-strong indigenous population of the remote Tiwi Islands has won a landmark case against oil and gas major Santos, derailing a multibillion-dollar gas drilling project running through its waters.

A judge has set aside approval for the offshore gas project and ruled that Santos has two weeks to remove its equipment from the islands, located to the north of Australia, after he found that the local indigenous population had not been properly consulted over the project.

The judgment by Justice Mordecai Bromberg, who visited the remote islands in August to hear the complaint, threatens the $3.6bn Barossa offshore gas project in the Timor Sea.

Dennis Tipakalippa, the Tiwi elder who brought the case against the oil and gas company, said in a statement: “We want Santos and all mining companies to remember — we are powerful, we will fight for our land and Sea Country, for our future generations no matter how hard and how long. We will fight from the beginning to the end.

“Santos tried to get away with not consulting us but today we have had our voices heard. We cannot be sidelined or silenced.”

Santos said it would suspend drilling, pending an appeal or a fresh approval to commence work on the 300km pipeline. It said in a statement that it was disappointed with the outcome of the trial and that the setting aside of its drilling approvals risked Australia’s reputation for trade and investment.

“Barossa is an important gas project for the nation, enhancing jobs, exports, and our relationships with investors and gas customers in Asia who have depended on Australia for their energy security for decades,” Santos said.

Indigenous rights have become a focus for investors in Australia following Rio Tinto’s decision in 2020 to blow up a 46,000-year-old heritage site in Juukan Gorge in Western Australia, which triggered the resignation of the mining company’s chief executive.

Santos and ConocoPhilips, which previously owned the assets, argued that they had met all legal requirements for the drilling application prior to the hearing.

Tiwi islanders, however, argued that they had not been properly consulted about the risks of the gas project which would disturb their “Sea Country” ecosystem including the turtle population, which has spiritual significance to the islanders. The islands had a population of 2,348, according to a 2021 census, with 87 per cent being of Aboriginal status.