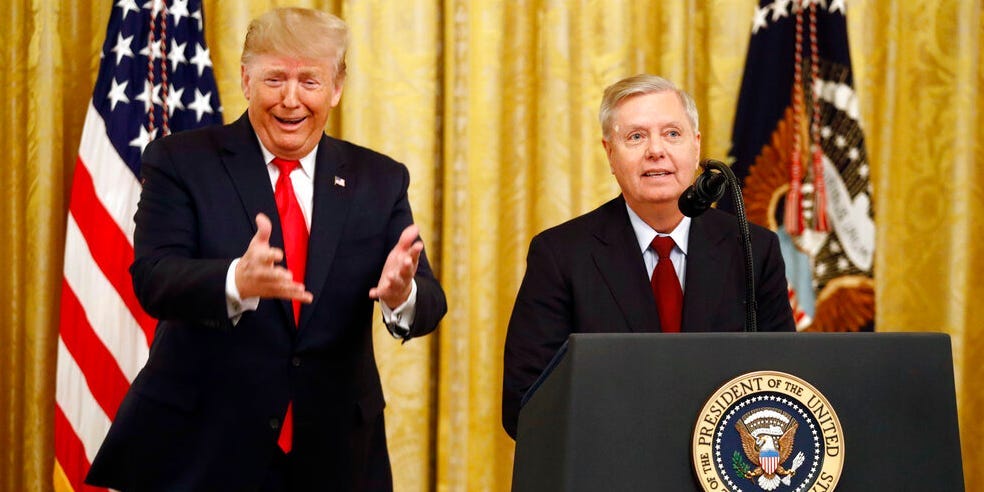 Graham ‘Kisses My Ass’ Because ‘I’ll Endorse His Friends’


During the 2016 Republican presidential primary, Sen. Lindsey Graham and then-candidate Donald Trump were not particularly fond of each other.

After Graham called Trump a “jackass” in response to the businessman stating that then-Arizona Sen. John McCain was “not a war hero” after being captured and held prisoner during the Vietnam War, the then-candidate shared the South Carolina Republican’s cell phone number.

In excerpts from New York Times journalist Maggie Haberman’s forthcoming book “Confidence Man,” which was published in The Atlantic, she detailed a visit to the Trump National Golf Club in Bedminster, N.J., where the former president has largely spent his summers since leaving the White House.

While waiting to speak with Trump, Haberman observed that she saw Graham for the second time in one year in close proximity to the former commander-in-chief; in the most recent appearance, the senator was wearing golf pants.

“Trump eventually entered the room, having lost a noticeable amount of weight since I had seen him last,” Haberman wrote. “Graham followed a minute later and gestured toward Trump. ‘The greatest comeback in American history!’ Graham declared.”

She continued: “Trump looked at me. ‘You know why Lindsey kisses my ass?’ he asked. ‘So I’ll endorse his friends.'”

Graham found the statement to be hilarious, laughing “uproariously,” according to Haberman.