Actions and reactions. That is one way to sum up the week that was in the markets, as events – both big and small – reverberated through Wall Street and beyond.

First, yesterday’s so-called “mini budget” brought down by U.K.’s new prime minister, Liz Truss, shook things up, causing the pound to take a dive. The sunk to below US$1.09 for the first time in more than 35 years. Investors sold off U.K. assets, while government bonds soared.

According to reports, Deutsche Bank’s head of foreign exchange, George Saravelos, said sterling was “in danger.”

“It is extremely unusual for a developed market currency to weaken at the same time as yields are rising sharply,” Saravelos was quoted in the Canadian-based Financial Post.

The aim of the government’s budget update is to cut taxes and curb household energy bills while simultaneously stimulating economic growth. Described as “the most sweeping tax cuts since 1972,” the move made big waves.

The U.S. markets reacted to a number of factors this week, culminating Friday with the Dow Jones officially dropping into a bear market.

Before the close on Friday, the Dow Jones fell below 29,439.72, the threshold marking the first bear market since the first major COVID-induced plunge in early 2020. An index enters a bear market when it sheds 20% or more from a recent high. In the case of the Dow, it lost more than that since its peak in January of this year. 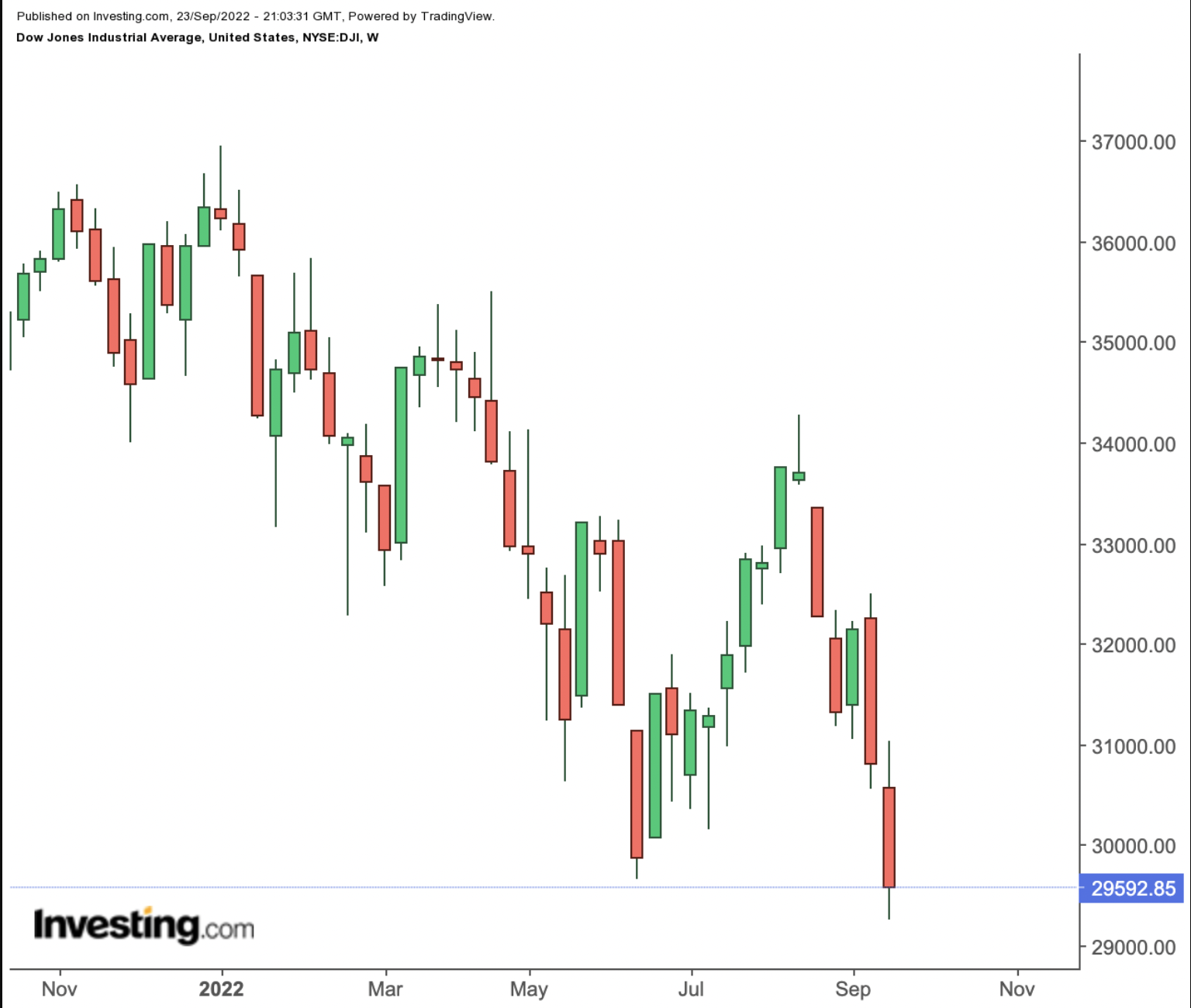 The markets were reacting to continued , the Federal Reserve’s latest and its promises of more to come, geopolitical issues that include Russia raising the spectre of intensifying and escalating its war in Ukraine, as well as the volatility of the markets in the U.K. and its plunging pound.

As Quincy Krosby, an analyst with LPL Financial was quoted in media reports said: “This is a global macro mess that the market is trying to sort out.”

To quantify that mess in another way: Only two of the 30 stocks listed on the Dow closed yesterday not in the red – Home Depot (NYSE:) and Johnson & Johnson (NYSE:).

And The VIX Hit A New Recent High

And as the markets fell, the VIX moved higher. But the key here was how much higher. By the close on Friday the brushed 30, a level it has not breached since June.

Getting back to my theme of actions and reactions: An event at Meta Platforms back in July reverberated this week.

Back in the summer, the company formerly known as Facebook (NASDAQ:) reported its first quarterly drop in revenue in its history. Its missed analysts’ expectations, dropping 1% to $28.82 billion compared with revenues from the same quarter a year earlier of $29.1 billion. That turnaround sent waves through the company.

Fast forward to this past week, and the reaction came as Meta reportedly put workers on what it calls its “30-day list,” whereby the employees have a month to find a new job within the organization or leave if their department is downsized. The move is said to be a direct result of CEO Mark Zuckerberg stating back in July when the disappointing results were revealed that the company would reduce the number of employees on several teams during the coming year.

It’s a sign of the resizing going on in several tech companies.

Top Winners And Losers Of The Week