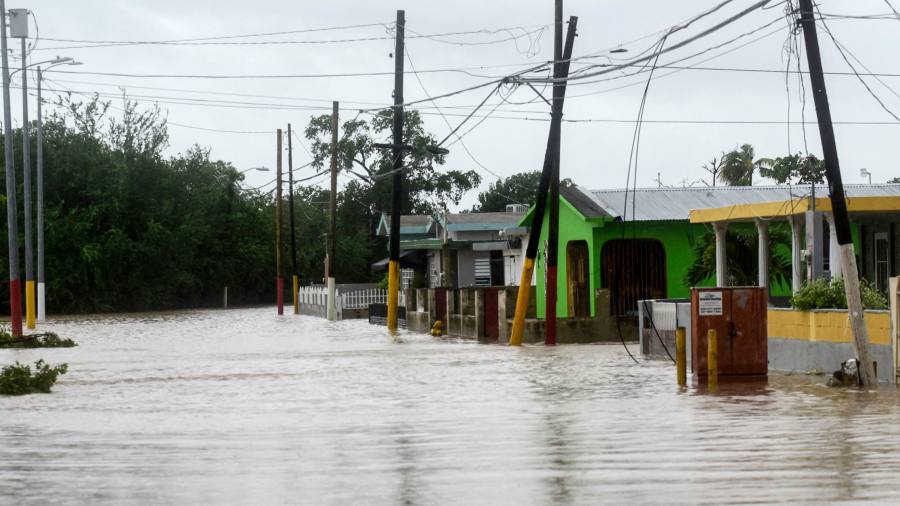 Welcome back to another Energy Source. It’s going to be a big week for climate and energy here in the US. The UN General Assembly and Climate Week are descending on New York. Derek, meanwhile, will be in Pittsburgh, Pennsylvania, for a gathering of energy ministers from around the world, including US energy secretary Jennifer Granholm. We’ll have much more here on Thursday and at FT.com throughout the week.

Today’s newsletter is focused on the future of oil prices. There’s an increasingly wide gap between the current market signals and what oil executives and analysts are saying. What explains the divergence?

And in Data Drill, Amanda looks at Puerto Rico’s blackouts. Years after promised reforms, the island remains stuck with a dirty, unreliable and pricey power grid.

Thanks for reading. — Justin

Oil execs’ story stands at odds with the market

While oil executives and top analysts continue to tell a bullish story about the future of oil prices, the market increasingly points in the opposite direction.

Are we headed into a new era of persistently high oil prices and supply shortfalls, like many oil bosses and analysts say? Or are this year’s sky-high prices — to steal a phrase — transitory, as the market seems to be saying?

Despite the surge in crude prices this year and fear of shortages, oil price futures are trading at a sharp discount to today’s prices. The September 2027 Brent crude contract is trading around $69 a barrel, more than $20/b lower than today’s prices. Here’s the forward curve:

This outlook, where prices head back towards historic norms, diverges sharply from the case many oil industry insiders are making about the market heading into a new high-price era.

At the heart of their argument is that the balance of power in oil markets is shifting from US shale producers back to Opec+ — and more specifically its core producers Saudi Arabia, the United Arab Emirates and Russia — in a fundamental and bullish shift for the oil market.

Rapid oil supply growth from the US in recent years had sapped much of Opec’s ability to influence prices by tinkering with supply. Every time Opec tightened the taps to try to lift prices, US shale producers overwhelmed the market with new supply, contributing to a long period of relatively low oil prices.

But, as we’ve written about extensively, there has been a revolution in the US shale patch with global implications. American producers are no longer chasing growth at the first sign of higher prices. Instead, they’re taking the windfall from higher prices and sending it back to shareholders. For now, there is a belief among US oil executives that the new low-growth, high- returns model is working and a shift back to unrestrained drilling looks unlikely.

That shift has put renewed focus on the ability and willingness of Opec+ to lift supply and keep a lid on prices. There appears to be little of either.

Francisco Blanch, an analyst at Bank of America, pointed out in a report this week that Saudi Arabia and the UAE’s spare capacity stands at less than 1mn barrels per day, a razor-thin margin in a 100mn b/d market. Other suppliers in the group are maxed out. That has left the group with virtually no room to add new supply.

The group is also signalling that it wants oil prices to remain high, Blanch says. Opec’s decision earlier this month to cut supplies while Brent prices were still above $90 a barrel, the first time a decision to reduce supply was taken at such a high price, signals Riyadh is perfectly comfortable with oil remaining around $100.

Why the disconnect between what many analysts and oil executives see as a bullish new era and a future price that is signalling a coming decline in oil prices? Crude consumption is the big dividing line. Supply may look tight, but that matters less when the market thinks demand is faltering. Nobody wants to get caught bullish on oil in an economic downdraft.

Many worry the US Federal Reserve’s inflation fight will bring an economic slowdown. Beijing’s zero-Covid policy, which has repeatedly locked down the country’s biggest cities, has also hit crude demand hard. Many also remain convinced that peak oil demand is going to come sooner rather than later.

The lower futures price is having a real impact in today’s oil patch. Pioneer’s Sheffield said oil executives were taking heed of the market’s signal to hold back drilling even as the world contends with shortfalls. “With the forward strip saying you’re going to get $65 a barrel in five years, that doesn’t really encourage more drilling,” he said.

The majority of Puerto Rican residents remain without power as Hurricane Fiona continues to move across the Caribbean.

More than 1.3mn households were disconnected as of Monday, according to blackout tracker PowerOutage.us. LUMA Energy, the island’s private power distributor, said it would take “several days” for full power to be restored.

Experts say the blackouts are a stark reminder of the US territory’s grid vulnerabilities and mismanagement. Hurricane Fiona comes after a quiet start to the 2022 Atlantic hurricane season and just days before the five-year anniversary of Hurricane Maria, which killed nearly 3,000 people in Puerto Rico and left some households without power for up to a year, the longest blackout in US history.

“The vulnerability of the system is due to . . . a centralised system that relies entirely on fossil fuel generation,” said Ingrid Vila Biaggi, founder of CAMBIO, an environmental non-profit in San Juan.

More than $12bn in federal spending has been allocated to recover the island’s energy sector since Hurricane Maria. In 2019, Puerto Rico passed a landmark energy policy, which includes renewable energy targets of 40 per cent by 2025 and 100 per cent by 2050.

However, as of 2021, only 3 per cent of Puerto Rico’s electricity was generated from renewables, compared to 20 per cent in the US, according to the US Energy Information Administration.

The island implemented its seventh increase in a year in June, with electricity rates now at 33 cents per kilowatt hour, more than twice the US average, according to an analysis by the Institute for Energy Economics and Financial Analysis. (Amanda Chu)