Chart Of The Day: Meta Could Rally Before Extending Drop To $130

The stock rebounded Monday by 1.56%, creating a bullish “piercing pattern.”

That’s when there is a red candle followed by a green candle that closes well into the red candle’s real body (price action between open and close, where the candle is solid, excluding the intraday highs and lows, represented by the wicks). The green candle nearly wiped out all of Friday’s losses, almost forming an “Engulfing Pattern,” an even more bullish pattern.

Nevertheless, Meta is down 56% year to date (YTD), making it the worst among big tech, more than doubling the ‘s decline in the same period.

META arguably changed its name to make people forget all the bad vibes the company created after its Cambridge Analytica scandal.

However, changing the company’s name has not been enough. On Sept. 14, I pointed out that Harvard Business school senior fellow Bill George CEO, Mark Zuckerberg’s failed leadership for the company’s demise.

The new company, Meta, has faced some other issues, including Apple’s (NASDAQ:) iOS privacy update disrupting Meta’s ability to use user information to target ads. Zuckerberg has also failed to compete successfully with TikTok, which has siphoned away users and advertisers. Experts have also criticized Zuckerberg’s investment in virtual reality headsets and some think he is placing too big a bet on metaverse. On the corporate front, Meta posted disappointing Q2 results when it warned of another quarter of declining sales.

So why do I think the name change has failed to help the share price? If Meta falls below $146.01, its 2020 bottom, it will be the lowest level since January 2019, when the company faced heated US congressional hearings on the Cambridge Analytica scandal where the British consultancy firm had collected the data of over 50 million Facebook users without their permission.

So, do I think the stock will keep falling? Definitely. But I expect it could rally in the short-term first. Let’s look at the chart. 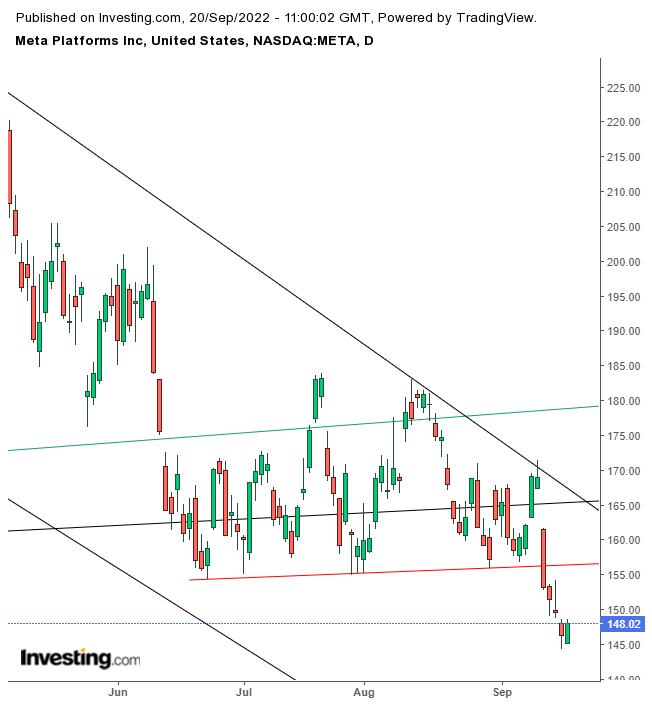 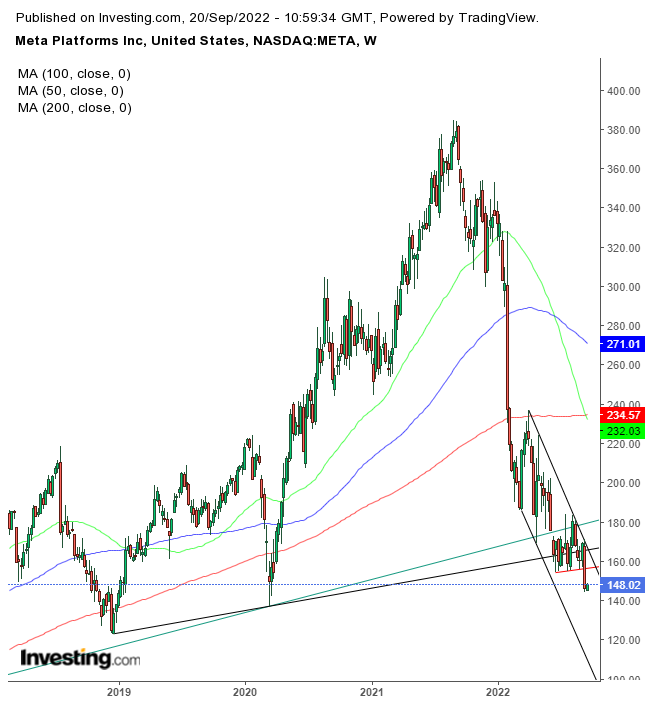 The price already fell below its long-term uptrend line since 2013. The H&S was created in the aftermath of breaking that significant support symbol. Then, the head of the pattern retested the broken uptrend line, proving its support had turned to resistance. Finally, the price violated the uptrend line since the December 2018 low. The coup de grace is the weekly Death Cross, for the first time in the company’s history.

However, remember our “Piercing/Engulfing Pattern?”

That bullish development underscores the support of the 2020 bottom, which will likely be in the headlines, encouraging long bets, supporting the price, and creating the impetus for a return move to retest the H&S within a falling channel.

Conservative traders should wait for the price to successfully retest the H&S with at least a long red candle before considering a short.

Moderate traders would risk a short when the price returns to the pattern’s resistance/channel top.

Aggressive traders could enter a contrarian, long position, counting on the rebound.

Disclaimer: At the time of publication the author had no positions in the stocks mentioned.

Insurtech gets more specialized, with products just for e-bikes and factory-built homes • TechCrunch

Leveraging up the World Bank to fund a global rescue