The Case For Adobe After The Figma Acquisition

That seemingly wonky math could be explained by several factors:

In that telling, the decline makes some sense. So does the fact that ADBE lost 24% for the week, and trades not only at a 29-month low, but 9% below where it did at the beginning of 2020.

That may not be the right way to view this story. The Figma deal appears more logical, and (possibly) less of an overpay, than the initial reaction suggests. The company’s and Q4 guidance were mixed, but not nearly enough to drive an epic sell-off. And with ADBE now trading at a suddenly reasonable valuation, there’s a solid case that last week’s plunge is an opportunity. 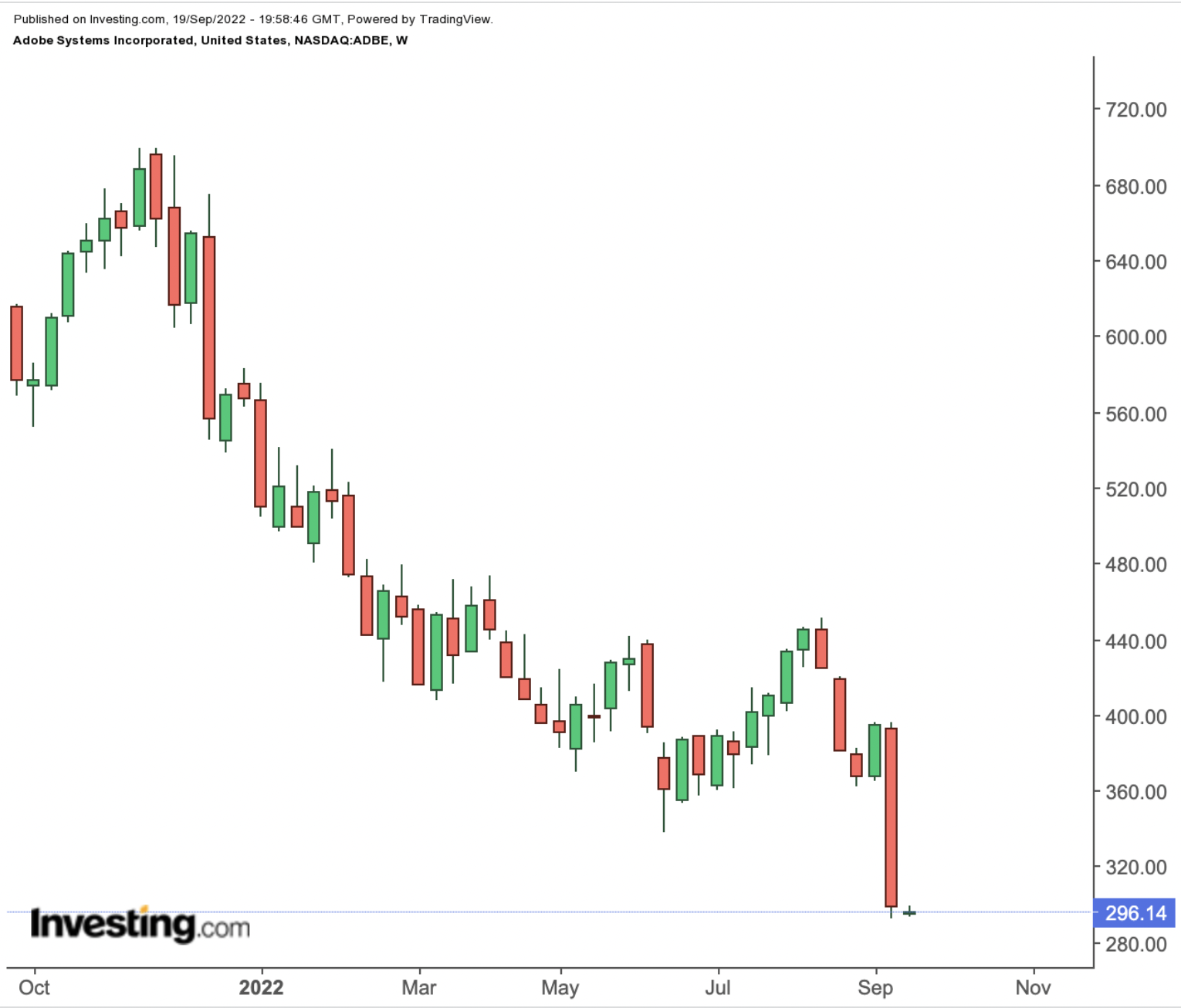 As the plunge in ADBE stock shows, the market is skeptical of the deal, and particularly of the price paid. Per the Adobe release announcing the acquisition, Figma should generate revenue this year of more than $400 million; additional disclosure of ~$200M in added revenue in 2022 implies year-over-year growth likely in the high-80s on a percentage basis.

That’s an attractive profile, but the $20-billion purchase price suggests a price-to-revenue multiple in the 45x-48x range.

That’s a 2021-type multiple in a 2022 market. Snowflake (NYSE:), the current leader in price-to-sales among large-cap software stocks, trades at 27x this year’s revenue. Investors think Adobe overpaid, and with some justification.

Those in software and tech, however, seem more bullish. Figma is an exceptionally well-regarded company, as seen (to name just one example) in this post from 2020 titled “Why Figma Wins.”

A Twitter thread from Amal Dorai makes the strategic case for the acquisition. Unlike Adobe, Figma has been “cloud-native” from the jump. Adobe’s legacy software makes it difficult to offer the multi-user collaboration that Figma does. Acquiring Figma is one way around that thorny problem.

Is Adobe In Trouble?

Another reason for the sell-off is not just that Adobe presumably overpaid for Figma, but that it had to overpay. Competition from both Figma and fellow start-up Canva has been seen as a growing risk to Adobe’s revenue and profit margins. From this perspective, the move to pay $20 billion for Figma is confirmation that the risk was and is real — and that Adobe’s business is not quite as bulletproof as investors once believed.

The concerns make some sense. But they seem potentially overblown. The existence of Figma and Canva doesn’t mean a new rival will inevitably emerge in the near future. Canva, in particular, plays in a different market than Adobe; it’s benefited from the explosion in less-technical customers trying to join the so-called “creator economy.”

That aside, with Figma on board, one key competitor has been brought into the fold. And while the $20-billion price tag does sound steep, it’s now more than incorporated into the ADBE stock price.

Looking at this year’s guidance, ADBE trades at a low-20s multiple to free cash flow even adjusting for stock-based compensation. That’s one of the lowest multiples in years for a business that, despite the short-term noise, still has a tremendous long-term opportunity. Even if the cost was questionable, Figma gives the company another way to attack that opportunity. Once the dust settles, investors likely will focus on that key fact.

Disclaimer: As of this writing, Vince Martin has no positions in any securities mentioned. He may initiate equity and/or options position(s) in ADBE this week.

You can read the full post at Overlooked Alpha.