Should You Buy Eli Lilly Stock As Drugmaker Continues To Outperform Benchmarks?


Investors rushing to snap up safe bets amid the threat of a prolonged recession have propelled an impressive rally in Eli Lilly and Company’s (NYSE:) shares. The global drugmaker has seen its stock surge 31.6% during the past year, massively outperforming its peers.

LLY’s performance is even more impressive when compared to its benchmark ETF, the Health Care Select Sector SPDR® Fund (NYSE:). While LLY stock rose to new highs in the past 12 months, XLV posted negative returns as cost pressures and supply chain hurdles hurt other drugmakers. 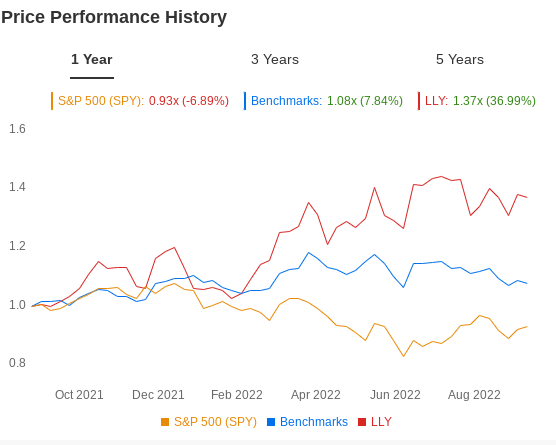 LLY stock, which has surged around three-fold during the past five years, may look expensive to some investors, especially when sales of the company’s COVID-19 antibody treatment are declining. Despite these headwinds, long-term investors have enough reasons to remain bullish on this name and take advantage of potential weaknesses in the coming days.

In the short term, Eli Lilly is facing some headwinds which could slow growth and hurt its stock. In its most recent , the company reported that sales of its COVID-19 treatments fell 13% on declining demand for monoclonal antibody treatment, bebtelovimab. Such sales may continue to wipe out as the pandemic slowly enters an endemic stage with less buying interest from governments and individuals.

Another hit to Lilly’s sales is coming from the company’s cancer medicine Alimta, following the recent loss of U.S. patent exclusivity that allowed the introduction of competing, lower-cost generic copies and contributed to a 63% decline in sales for the branded product.

However, drugmakers face patent-related risks all the time. Thus, investors should favor companies with a robust pipeline of new drugs that could replace the diminishing sales of older drugs. Eli Lilly is undoubtedly one of those pharma giants that have done well on this front.

In a recent note to clients, Morgan Stanley named Eli Lilly one of the investment bank’s top picks for the next 12 months due to the company’s robust new product cycle outlook. The new launches from Lilly should bring in considerable sales, which will help boost the company’s top line, expand operating margins and lead to share growth. 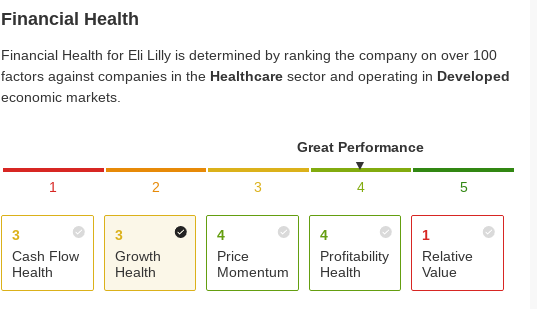 Bank of America expects Eli Lilly’s recently approved treatment for Type 2 diabetes, Mounjaro (or tirzepatide), could generate as much as $100 billion in annual sales by 2035–if it’s also approved to treat obesity and several other illnesses.

The bank, in a note last Friday, said:

“Of course, we recognize that Lilly’s ~30X P/E (2023) reflects optimism (peers: 11X), but its differentiated growth profile and pipeline progression still justifies putting money to work in shares at current levels, in our view,”

The Food and Drug Administration approved in May the weekly tirzepatide injection. However, the company is actively looking to use the drug to treat seven separate illnesses, including kidney disease and sleep apnea.

In addition, in June, Eli Lilly’s Alzheimer’s experimental drug donanemab gained breakthrough status from U.S. regulators, a designation that will speed its consideration for approval.

The drug now becomes the third to receive the designation based on its ability to attack amyloid, an abnormal protein believed to be involved in the damage Alzheimer’s causes in the brain. Lilly told investors last month that the Food and Drug Administration has accepted donanemab for review under an accelerated approval pathway.

LLY has many catalysts for long-term growth that make its stock an attractive buy amid the current macro and geopolitical turmoil.

Disclosure: The writer doesn’t own the shares of Eli Lilly nor XLV.

FirstFT: US lawmakers to vote on financing weapons exports to Taiwan