In a I explored a methodology to guesstimate the ’s 2-year annualized return 12 months into the future. A silver bullet? Hardly, but as short-term forecasting models go you could do worse. But your editor gets poor marks for explaining the details. Several readers reached out and asked for clarification. Allow me to make amends.

Consider the relationship between the spread and the 12-months advanced 2-year return, per the chart below. The main takeaway: there’s a negative correlation between the two time series. It’s not perfect, but it persists enough of the time so that you should think through the reasons to ignore it in real time. 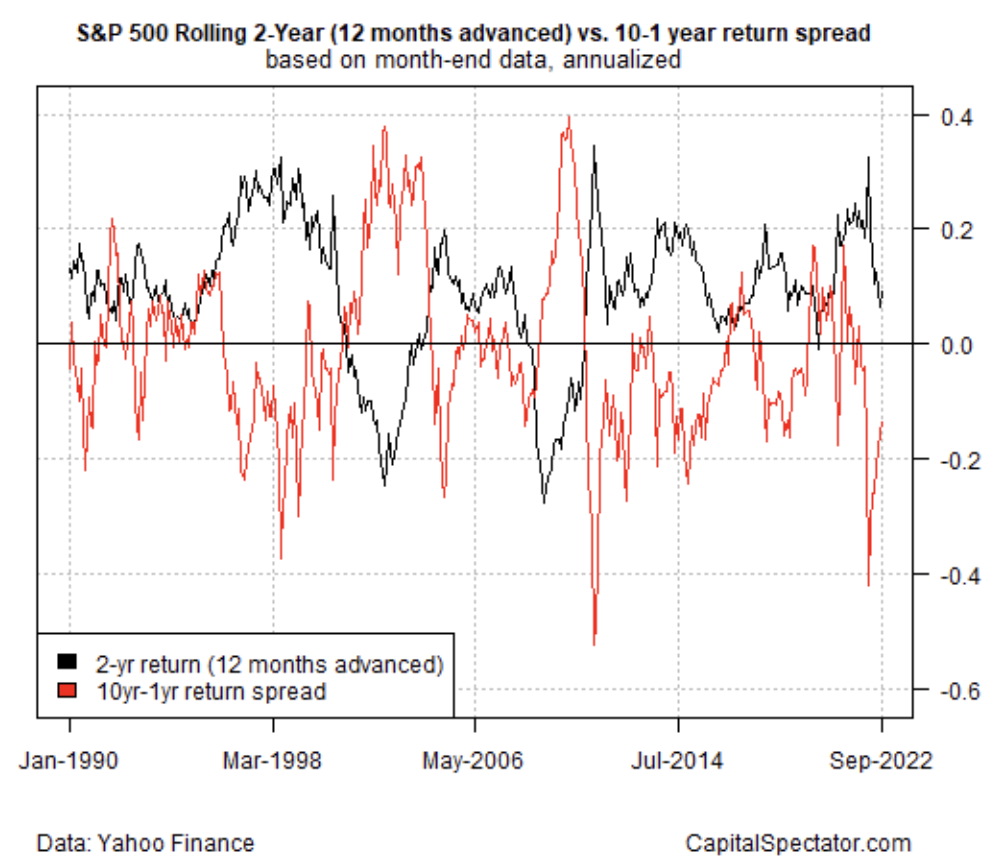 Why would you expect a negative relationship? The reasoning is that when the long-term return (proxied by the 10-year window) is high relative to recent market activity (1-year return), mean reversion is prone to set in to a degree in the near term. As a result, a high 10-year/1-year spread implies a relatively low or negative 2-year annualized return 12 months ahead. The opposite also applies: when the 10-year return is below the 1-year return, the negative spread suggests that weak long-term performance will rebound.

For a somewhat clearer summary of this relationship, let’s take the chart above and invert the 10-year/1-year spread. To the extent that the inverted spread tracks the 2-year return (12 months ahead), the modeling reflects a robust forecast. 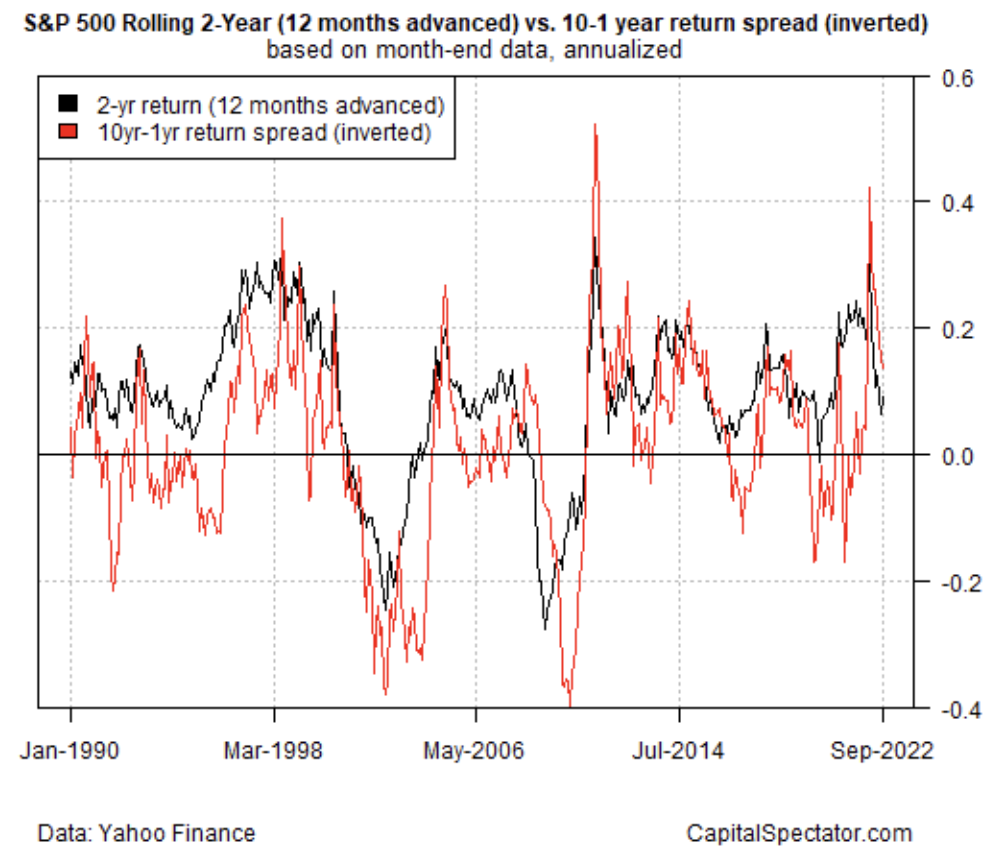 Critics will note that the lines don’t perfectly match in the inverted chart immediately above. True, which is the basis for using this forecast cautiously. Then again, no forecasting model is perfect, but this one captures the relationship between the spread and forward 2-year performance fairly well. Note that the correlation is 0.75 for the two time series since 1990 via the inverted chart above — a decent if imperfect fit. (A 1.0 correlation would reflect a perfect fit.)

Alas, there’s a non-trivial amount of noise in the relationship, as illustrated in the linear-regression chart below. If the model was perfect, all the dots would fall along the blue regression line, but that’s obviously not the case. (Note: the red dot reflects the current 2-year return vs. the spread from 12 months previous.) 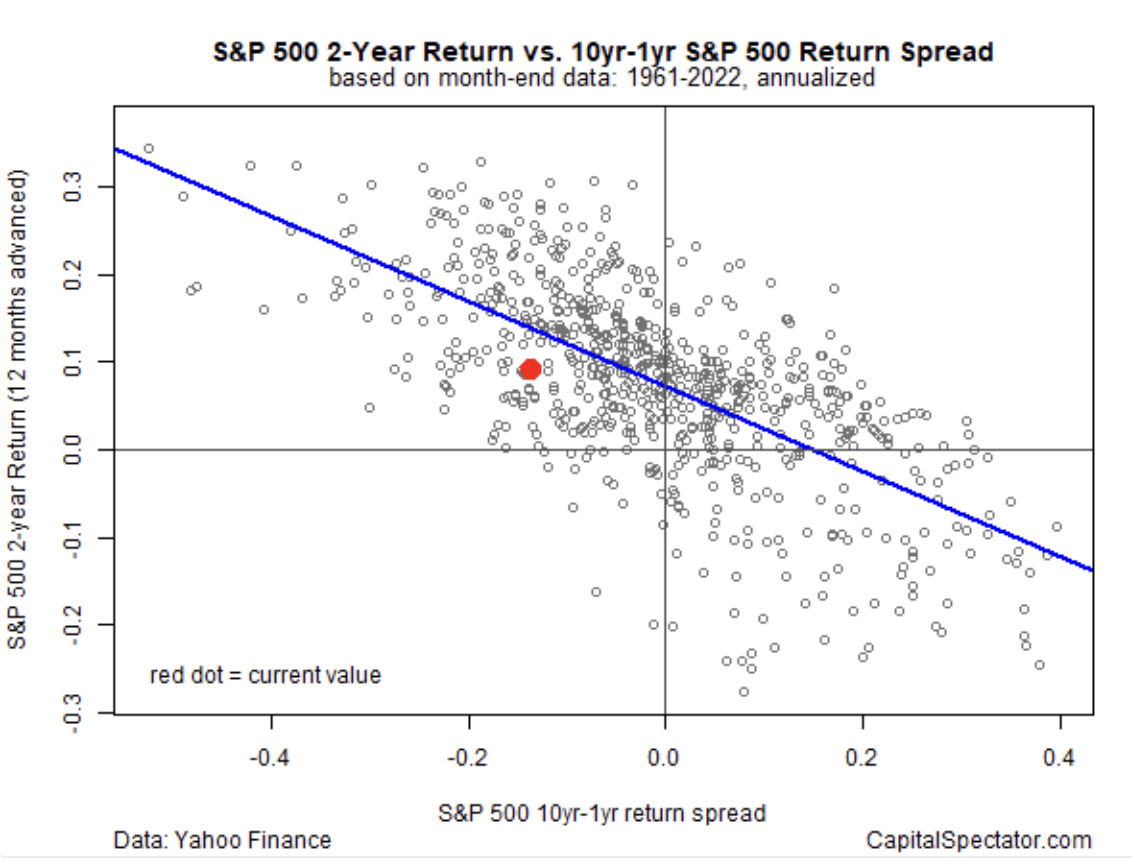 The message is that you can use this model for developing perspective on what appears to be brewing for the S&P’s 2-year return at this point 12 months ahead. The forecast at any one point in time should be viewed with caution (ideally you’ll use it in context with other models), but routinely monitoring the ebb and flow of the estimates offers a useful guide for evaluating how Mr. Market’s discounting machine is evolving.

Did US inflation ease again in August?