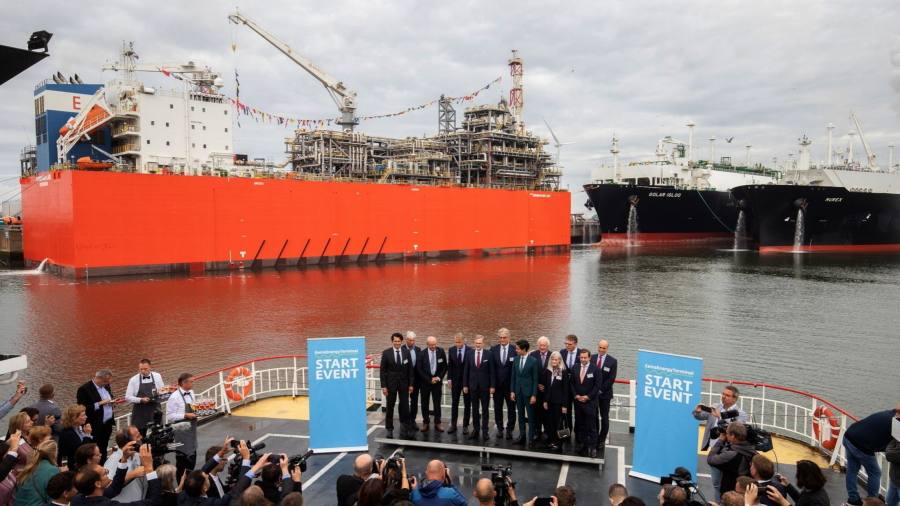 
The Netherlands has taken its first delivery of liquefied natural gas at a new terminal, marking a step forward in Europe’s efforts to develop infrastructure that helps it cut its dependence on Russia gas.

As part of the bid to diversify away from Russian gas after President Vladimir Putin launched the full-scale invasion of Ukraine, European countries have been racing to secure floating storage and regasification units, or FSRUs — liquefied natural gas tankers with heat exchangers that use seawater to turn the supercooled fuel back into gas.

The EU has formed plans for as many as 19 new FSRU projects at an estimated expenditure of €9.5bn, according to calculations by Ember, an energy think-tank. The terminal at Eemshaven was officially opened late on Thursday with the first LNG shipment arriving from the US gulf, said Dutch gas grid operator Gasunie.

Until now, the Netherlands could only import LNG through Rotterdam but that has changed with two FSRUs, the Golar Igloo and Eemshaven LNG, moored in Eemshaven. The Eemshaven project was completed in record time and the first gas will flow into the country’s network from mid-September, according to Gasunie.

The pair of floating ships will supply gas to Germany and the landlocked Czech Republic. “The arrival of the new LNG terminal is an important step not only for the Netherlands, but for the whole of Europe to completely phase out the dependence on energy from Russia as quickly as possible,” said Rob Jetten, Dutch minister for climate and energy.

FRSUs offer the quickest way for Europe to end its reliance on the pipelines that bring in large quantities of natural gas from Russia. Land-based LNG terminals cost more and take longer to build. However, additional import infrastructure will do little to lower European gas prices, which are around 10 times higher than the average of the previous decade, unless there is a significant increase in supplies from LNG producers like the US, Qatar and Australia. The EU is developing proposals to help industries and consumers cope with the soaring energy prices. One of the measures being discussed by the bloc’s energy ministers on Friday is an overall price cap on gas imported into the bloc. The Netherlands is one of a handful countries to have expressed reservations about such a plan, saying that it would harm the EU’s relations with international partners.

Germany, which had no LNG import terminals and sourced more than half of its gas imports from Russia before the invasion of Ukraine, aims to charter at least seven FSRUs, three of which are planned to start this winter. Another FSRU serving Estonia and Finland is expected to be ready by year-end, while other countries such as France, Greece and Italy have plans for floating terminals in the coming years.

Brussels also wants member states to improve pipeline connections between countries. A dispute between France and Spain, which has the biggest capacity to handle LNG imports in the EU, has been intensifying over efforts to reboot plans for the MidCat pipeline between the two countries.

French president Emmanuel Macron has questioned the need for the project which Paris estimates would cost at least €3bn, although he left the door open for further discussions with European partners.

Superyacht Linked to Putin Was Christmas Gift From Oligarchs: Report