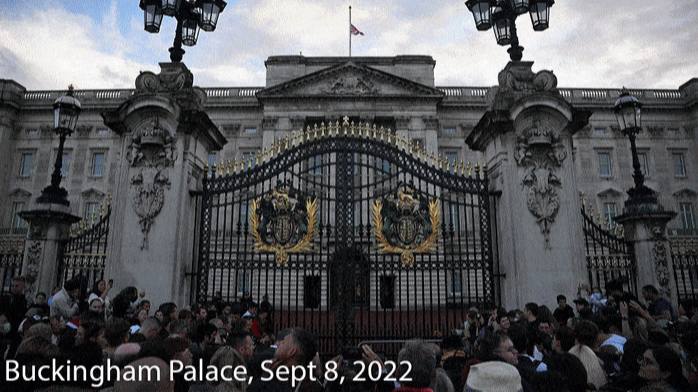 FirstFT: King Charles III to address a nation in mourning

King Charles III is preparing to address the nation for the first time as head of state following the death of his mother, Queen Elizabeth II, after seven decades on the throne.

The new King will travel from Balmoral, the royal estate in Scotland, to London and is expected to hold an audience with Liz Truss, who became prime minister just three days ago. He will then make a televised address at 6pm.

The death of the Queen at 96 — announced by Buckingham Palace yesterday evening — has left the UK in mourning but reflecting on a life of duty in which she bound the country together through momentous change.

The official period of mourning will last until seven days after the funeral, Buckingham Palace said today. It did not confirm the date of the funeral.

Parliament will gather at noon today for a 10-hour session for MPs to pay their respects to the Queen while bells will toll at St Paul’s Cathedral, Windsor Castle and Westminster Abbey.

A ceremonial bell at Windsor Castle will toll 96 times, once for each year of the Queen’s life — and a 96-gun salute will be fired in Hyde Park.

Crowds gathered outside the Queen’s residences including Buckingham Palace and Windsor Castle, leaving flowers and tributes. World leaders paid their respects to the longest serving monarch in British history.

In America, there was a rare outbreak of bipartisanship in Washington and an unusual hush on Wall Street when the news of Queen Elizabeth II’s death was announced.

King Charles III’s formal accession to the throne and proclamation as monarch will take place tomorrow, when parliament will sit for senior MPs to swear an oath of allegiance.

The new King said that the death of his mother was a moment of “the greatest sadness for me and all members of my family”.

Our live blog will keep you up to date with the latest developments as they are announced.

What did Queen Elizabeth II mean to you? Please share your thoughts with us at firstft@ft.com. Thank you for reading FirstFT Americas — Gordon

1. Justice department appeals against ‘special master’ decision The Department of Justice has appealed against a judge’s decision accepting Donald Trump’s request to appoint a court official to review thousands of documents the FBI retrieved from his Florida resort.

2. Citigroup wins appeal over $500mn it sent by mistake A US appeals court has overturned a ruling that allowed hedge funds to keep half a billion dollars that Citigroup mistakenly sent to them, in a victory for the Wall Street bank that could enable it to recoup the money.

3. Republicans warn Apple against using Chinese group’s chips in new iPhone Apple has been warned that it will face intense scrutiny from Congress if it procures memory chips from a controversial Chinese semiconductor manufacturer for the new iPhone 14.

4. EY bosses back radical break-up Leaders of the Big Four accountant yesterday approved a plan to split the audit and advisory businesses, a radical proposal that will now proceed to a vote of the firm’s 13,000 partners.

5. Kim Jong Un toughens nuclear policy The North Korean leader has enshrined his country’s status as a nuclear power in law and allowed the use of pre-emptive strikes, as the regime seeks to take advantage of mounting tensions between the US and Russia and China.

Have you kept up with the news this week? Take our quiz.

Joe Biden visits Ohio The president will visit a new Intel chip plant and is likely to speak about American manufacturing following the passage of the Chips and Science Act that provides subsidies to US microchip manufacturers along with technology and science investments.

Monetary policy Fed governor Christopher Waller will deliver a speech at the Vienna macroeconomics workshop in Austria. The speech comes a day after Federal Reserve chair Jay Powell doubled down on his message that the US central bank would act “forthrightly” to ensure increased inflation did not become entrenched.

Company earnings Kroger, the US grocery chain, reports results before the market opens and will offer insight on the state of the American consumer as shoppers prioritise spending on groceries in the face of elevated inflation. Analysts expect revenue to increase to $34.36bn from $31.68bn a year earlier, according to Refinitiv.

Economic data Economists expect Canada’s jobless rate to tick up slightly to 5 per cent, from 4.9 per cent in July, according to Refinitiv estimates.

9/11 Sunday marks the 21st anniversary of the terrorist attacks in New York and Washington.

Elizabeth II: an appreciation by Simon Schama The UK’s longest-serving monarch was so much more than a head of state. She was quintessential Britain, writes the historian and broadcaster.

Can Japan feed itself? When the Japanese food retail industry’s collective doors open on October 1, shoppers who have barely experienced inflation since the early 1990s will be hit by the most severe price shock in almost two generations. Without immediate agricultural reforms, the country is vulnerable to an intensifying global food crisis.

Ukraine claims significant gains in counter-offensive Ukraine claimed to have regained territory in the eastern Kharkiv region as Moscow focused on repelling Kyiv’s southern offensive around Kherson. The gains, which represent Ukraine’s most successful counter-attack since fending off Russia’s initial assault, could weaken Moscow’s hold on the Donbas region, analysts said.

Advertising agencies ask ‘where are all the people?’ In an industry disrupted by tech, employees have options to seek higher salaries and fulfilment elsewhere. “The good — and the bad — news is our people are very talented, which means they’re always in demand outside [the company],” says one executive.

A life in pictures

Explore these enduring images of the journey to the throne and the service of the UK’s longest-reigning monarch.