Chinese companies have been some of the market’s worst performers over the past year, as they fell out of favor after Beijing launched a broad regulatory crackdown aimed at reining in the country’s tech sector in late 2020.

The Invesco Golden Dragon China ETF (NASDAQ:), which is composed of securities of U.S-listed companies headquartered or incorporated in China, has tumbled approximately 67% since reaching an all-time high of $85.90 in February 2021.

Alibaba (NYSE:) has seen its valuation collapse as Beijing cracks down on tech companies with consumer-facing platforms in order to improve data privacy.

At current levels, the Hangzhou, China-based tech giant has a market cap of $239.8 billion, making it China’s most valuable company.

Wall Street still has a long-term bullish view on the stock, with 32 out of 33 analysts surveyed by Investing.com rating it as either a ‘buy’ or ‘hold’ with an average analyst price target of $127.92, representing an upside of 46.7%. The average fair value on InvestingPro+ is $142.59, a potential 59% upside. 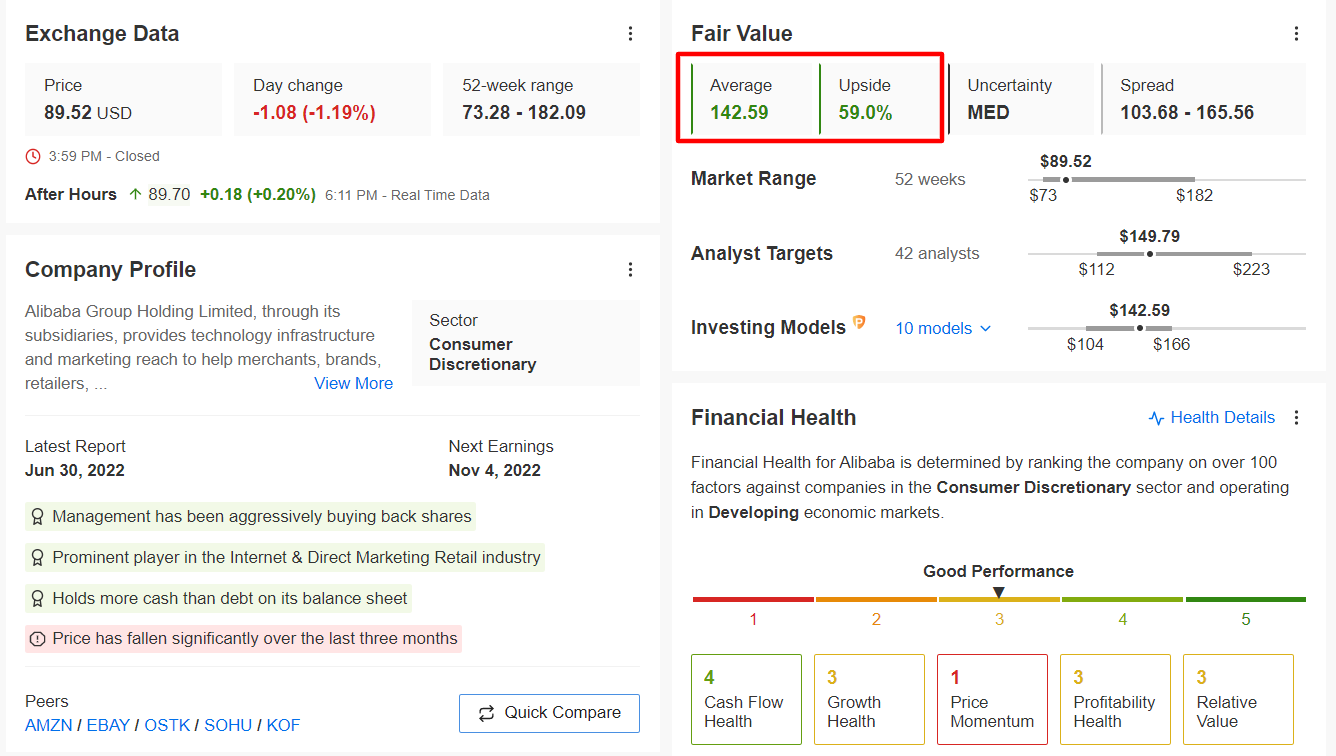 Despite the year-long antitrust campaign, Alibaba has displayed ongoing strength in its core e-commerce business. Outside of its retail segment, cloud revenue has been another major growth driver as it tries to solidify its market position along with U.S. counterparts including Amazon (NASDAQ:), Microsoft (NASDAQ:), and Google (NASDAQ:).

Despite fears over the damaging impact of regulatory scrutiny in Beijing and Washington, Baidu (NASDAQ:) shares have held up better than local peers year-to-date, falling “just” 8.7%. BIDU shares have staged an impressive rebound in recent weeks, up 33.7% since reaching a 52-week low of $101.62 on May 12. However, BIDU remains nearly 62% below its February 2021 peak of $354.82.

At current levels, Baidu has a valuation of $47.4 billion and is the fifth biggest tech company in China by market cap.

I believe further declines in Baidu’s stock may be limited as the worst of Beijing’s anti-tech regulatory campaign appears to be over and the tech behemoth aligns itself with the priorities of China President Xi Jinping.

In another positive sign, Chinese and U.S. regulators have stepped up their efforts to reach an agreement and solve their years-long audit dispute so that Chinese firms can remain listed in the U.S.

According to the Investing Pro+ model, BIDU stock has a fair value of approximately $188 a gain of 38%. Most analysts remain generally bullish on the Chinese internet giant, as per an Investing.com survey, which revealed that 21 out of 23 analysts covering the name rated it as a ‘buy’, with an average price target of $166.78. 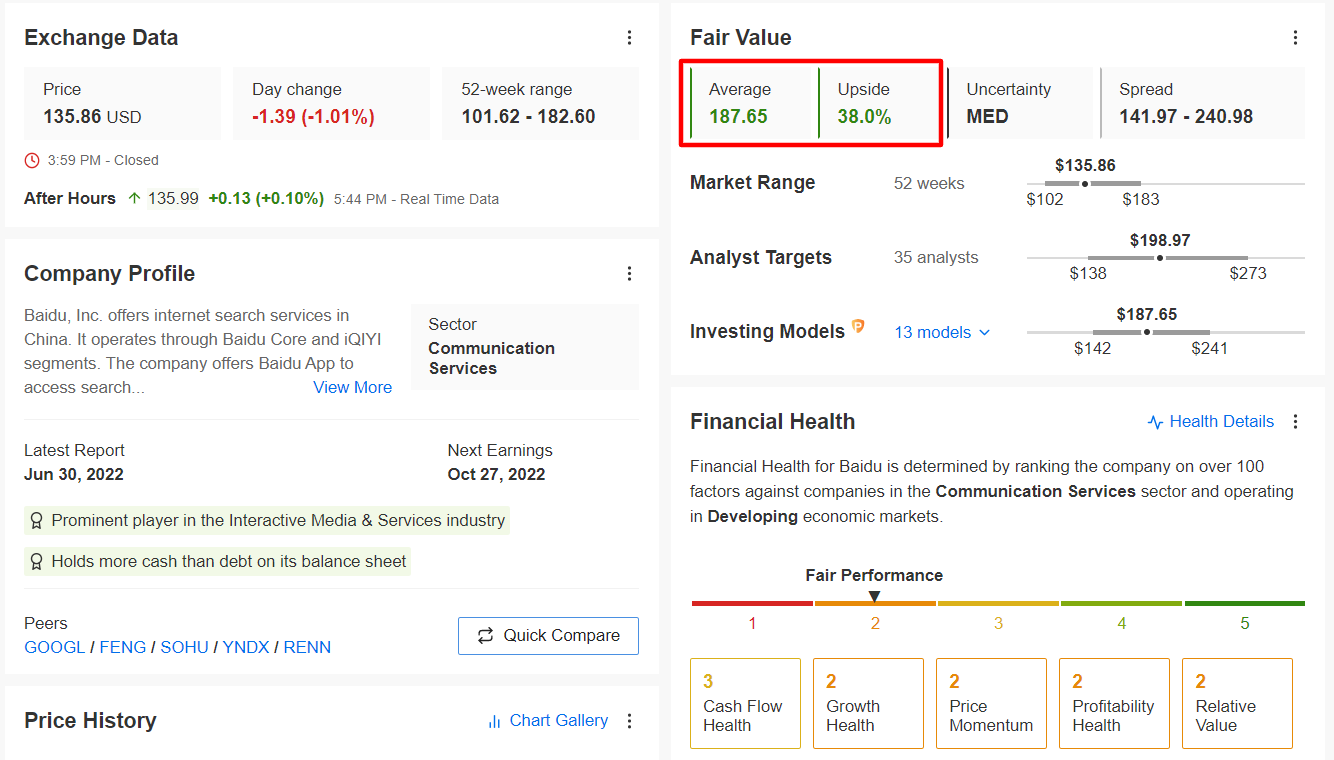 Baidu reported profit and revenue which blew past estimates when it reported numbers in late August. It has heavily diversified its business in recent years, expanding into cloud computing, autonomous driving, and artificial intelligence.

Xpeng (NYSE:) stock has struggled in 2022 as China’s drastic measures to contain a resurgence in Covid cases limited electric vehicle (EV) output at its production factories and disrupted supply chains.

Shares of the Guangzhou, China-based EV company, which are languishing near their lowest level on record, have underperformed the broader market by a wide margin year-to-date, losing 69% of their value. Even more alarming, XPEV stock is almost 80% away from its record peak of $74.49 reached in November 2020.

At current levels, Xpeng has a valuation of $13.5 billion, making it the third largest electric vehicle maker in China in terms of market cap, trailing Nio (NYSE:), and Li Auto (NASDAQ:).

In my view, Xpeng could be poised for a strong comeback amid indications that authorities in China will unleash fresh stimulus to support the economy in the near-term to combat the negative impact of its strict ‘zero-Covid’ policy. In addition, China said last month it would extend its tax exemption for new energy vehicle purchases until the end of 2023 in an effort to spur demand.

In spite of the recent slide, Xpeng’s stock remains a favorite amongst Wall Street analysts, with 24 of 26 ratings collected by Investing.com reflecting a bullish recommendation. Among those surveyed, XPEV stock had whopping upside potential of 112.2% from Thursday’s closing price.

Likewise, the quantitative models in InvestingPro+ point to a gain of 29.2% in XPEV stock over the next 12 months. The automaker, which plans to begin deliveries of its new G9 SUV in October and launch two new models next year, delivered 90,085 vehicles through the first eight months of the year, representing a 96% year-over-year increase.

Disclosure: At the time of writing, Jesse has no position in any stock mentioned. The views discussed in this article are solely the opinion of the author and should not be taken as investment advice.

Energy crisis: Truss must bust the link between renewables and gas