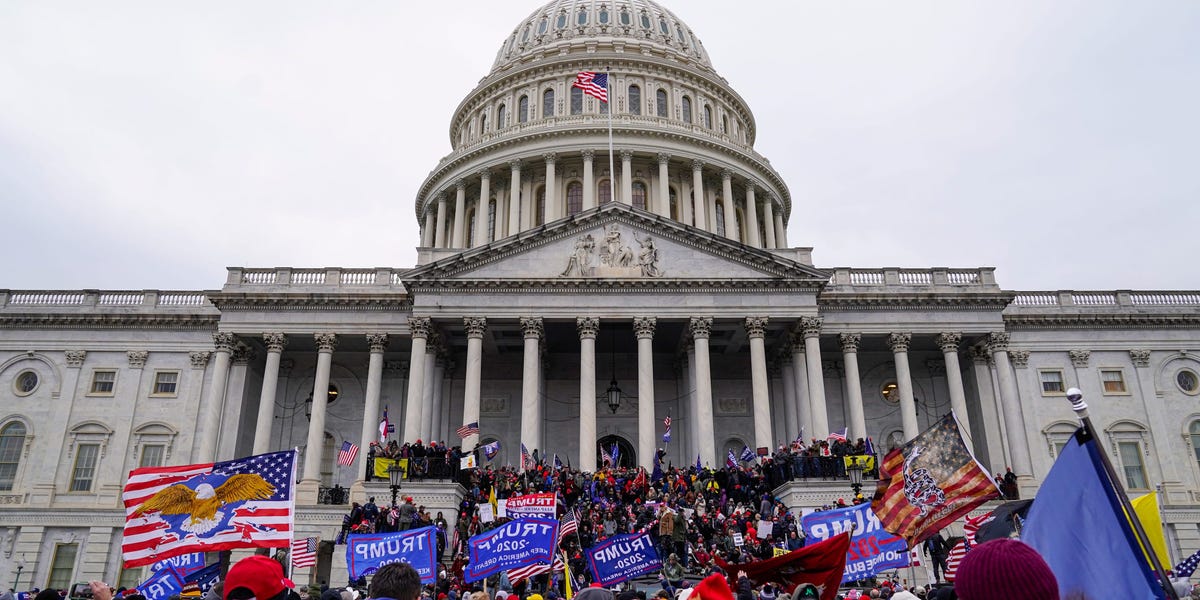 
More than a year-and-a-half after a mob of pro-Trump rioters laid siege to the US Capitol, multiple people who were there that day are seeking to join the very institution that found itself under attack on January 6, 2021.

Three people — including two veterans — who were present at the Capitol as a Trump rally descended into a riot are running for Congress in the upcoming November midterm elections, according to a New York Times report published Friday.

All three candidates have varying levels of support from the GOP institution, highlighting the lengths to which Republican leaders are going in an effort to retake Congress in two short months.

None of the three candidates have been charged with entering the Capitol during the attack or any other crime related to the insurrection.

The development comes one year after at least 10 people who were at the Capitol on January 6 won their respective and varied political races in November of 2021.

Sandy Smith, a self-described “military mom” and business owner who is running in North Carolina’s 1st Congressional district, tweeted two pictures on January 6 of the crowd marching toward the Capitol, captioning the photos: “In DC fighting for Trump! Just marched from the Monument to the Capitol!”

A super PAC associated with House Minority Leader Kevin McCarthy initially tried to hinder Smith’s congressional chances, The Times reported, by funneling hundreds of thousands of dollars into negative ads against her. But when Smith ultimately achieved victory in her primary, the National Republican Congressional Committee threw its support behind her, adding her to McCarthy’s “Young Guns” program, which aids newer candidates in their competitive races.

The North Carolina district in which she runs tends to tilt slightly Republican, according to the publication. Smith’s hardline, extremist views, however, have political forecasters predicting that Democrats may take the edge in the race.

But two other candidates who were at the Capitol on January 6, 2021, might just win their races.

JR Majewski, an Air Force veteran who was at the Capitol with a QAnon live-streamer, has received some firsthand help from McCarthy in his Ohio race against a Democratic incumbent.

Majewski maintains that he broke no laws on January 6, 2021, and tweeted that he was “cleared by the FBI.”

McCarthy campaigned for Majewski last month, where he attempted to downplay and distance the candidate from his opponent’s January 6-related attacks, according to The Times.

Another candidate whom the GOP threw their support behind is Derrick Van Orden, a retired Navy SEAL running for an open seat in Wisconsin. All three top House Republicans, as well as former President Donald Trump, have given Van Orden their endorsement.

In a local op-ed, Van Orden explained his presence in DC on January 6, 2021, saying he was in Washington for “meetings and to stand for the integrity of our electoral system as a citizen.”

Van Orden wrote that he left the area as soon as he observed the protest descending into a riot.

But for both Van Orden and Majewski, their Capitol riot ties are unlikely to hurt their electoral chances. Van Orden seems to be the favored candidate in his race, while Majewski’s race is widely regarded as a toss-up, according to The Times.

Representatives for the Van Orden, Majewski, and Smith campaigns respectively did not immediately respond to Insider’s request for comment.

How would a G7 price cap on Russian oil work?