Before the novel coronavirus pandemic struck, Salesforce.com (NYSE:) long looked like an excellent barometer of investor sentiment. In fact, it seemed the epitome of the 2010s bull market.

Salesforce.com was certainly an excellent business. The company grew revenue more than 20% every year. It helped pioneer the rise of software-as-a-service, or SaaS, which is also referred to as ‘cloud’ software. Salesforce itself said in early 2019 that it was the fastest enterprise software company to reach $13 billion in revenue.

But Salesforce stock has always seemed to reflect that — and then some. Shares usually traded for well past 50x earnings per share. Value-oriented investors (this author included) would look at CRM and think, “Well, yes, this is a great business — but the valuation is too high.” And then the stock would keep gaining. Indeed, between the beginning of 2010 and the beginning of 2020, Salesforce stock rose 782%.

This decade, however, has been quite different. After closing Wednesday at its lowest level in 27 months, CRM now is down 10% since the start of 2020. The , an index heavy on other large-cap tech names, has rallied 41% over the same stretch. 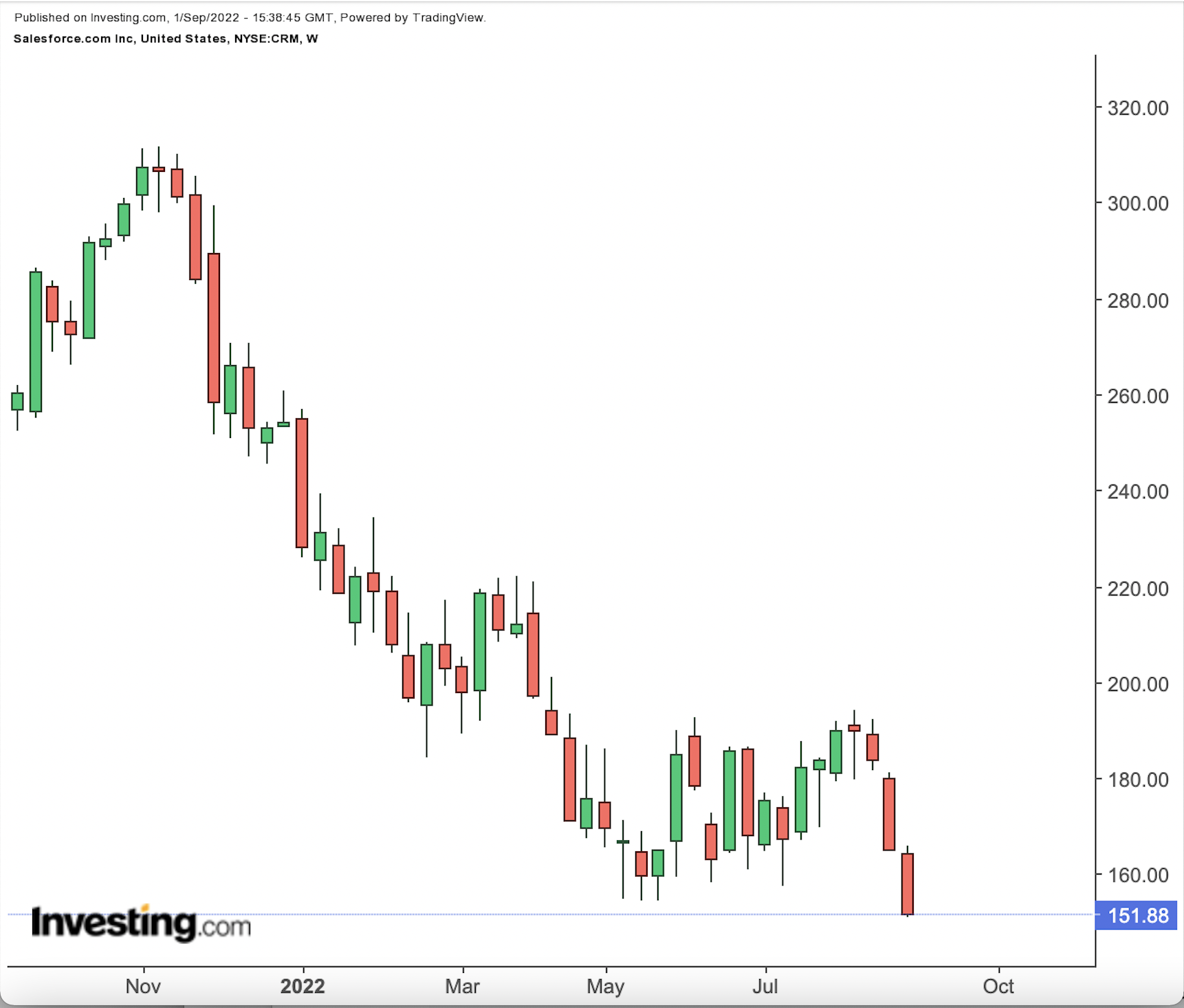 The concern with CRM’s pre-pandemic valuation wasn’t just the headline multiple to earnings or free cash flow. It was the fact that, looking closer, CRM was even more expensive than it appeared.

Like many tech companies, Salesforce excludes non-cash charges from its calculation of adjusted profits. In some cases, such as amortization of intangibles, those exclusions are somewhat defensible.

But nearly all tech companies, Salesforce included, also exclude share-based compensation. That’s a bit more problematic. That compensation is not a cash expense, obviously: it’s paid in cash. Unlike, say, amortization of acquired intangible assets, however, stock-based comp is a direct expense from running the business in that specific period. It’s simply paid in stock rather than cash.

And Salesforce issues quite a bit of stock. Guidance for fiscal 2023 (ending January) suggests stock-based comp will total more than 10% of revenue. Salesforce is guiding for operating profit margins of 20.4%; half of those “profits” are coming simply by ignoring stock options with a present value of roughly $3 billion.

Before the pandemic, investors were relatively content to ignore this potential problem. For instance, CRM closed 2019 at $162.64. In FY20, the company earned $2.99 per share on an adjusted basis, suggesting a price-to-earnings multiple of 54x.

But fully $2.10 of that $2.99 came from the exclusion of stock-based comp. Another 39 cents came from mark-to-market accounting of the company’s investments. When accounting for stock issuance, Salesforce’s operating business was barely profitable.

Free cash flow figures were better, but there too stock-based comp was a benefit, driving nearly half of the company’s FCF. All told, adjust for that compensation and investors were paying more than 300x earnings and about 100x free cash flow.

No Room For Error

In this kind of market, investors clearly are paying closer attention to valuation. Meanwhile, Salesforce doesn’t look like quite the business it was a few years ago.

But Salesforce always tops Street estimates. According to my research, it has been at least a decade since it missed. More importantly, the company also cut its full-year outlook and saw billings (which reflect the revenue actually gained during the quarter, as opposed to previously booked but deferred revenue) grow a disappointing 11%.

Management blamed longer deal cycles for the soft billings performance. Many other cloud providers have given similar commentary. But the problem for CRM stock is that decelerating growth is not priced in.

Even with the stock down by 50% from last year’s highs, and as noted 10% from the end of 2019, CRM remains expensive when adjusting for stock-based compensation. The company is guiding for adjusted EPS this year of $4.71 to $4.73, suggesting a reasonable 33x P/E multiple. But that outlook is getting a $3.23 boost (per the company itself) from share-based comp; back that out and CRM is trading at 100x earnings. Price to free cash flow likely is above 50x on the same basis.

It’s possible Salesforce.com still is a great enough business to support those multiples. At the least, there are no signs that the company is losing market share and/or that customers are disappointed with the product.

But even the best businesses face valuation questions at some point. It seems clear that point has arrived for Salesforce.com.

Disclaimer: As of this writing, Vince Martin has no positions in any securities mentioned.