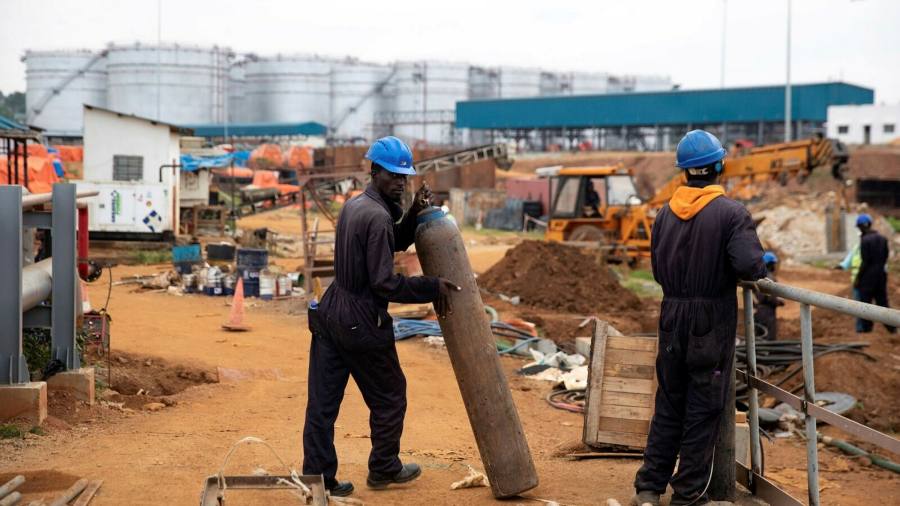 
As a boy, Sam Mamia, a Maasai from Kajiado county in southern Kenya, used to herd his father’s livestock on the hills around his house.

Now 34, he still works within sight of where he roamed as a child. “My home is there and my school was there,” he says, pointing to nearby fields where cows and goats are grazing. But the fields are now overshadowed by a 60-strong army of hulking white, gently humming wind turbines, each taller than a Boeing 747 is long.

As an engineer with a decade of experience at General Electric, Mamia is helping to run the 100-megawatt Kipeto wind farm, the second-largest in the country, built at a cost of $300mn.

Kipeto, 70km south of the capital, Nairobi, is part of a renewable energy mix that makes Kenya’s electricity supply greener than that of most countries in the west. Roughly 92 per cent of its electricity is generated from renewables, although Kenya has an installed capacity of just 2.9 gigawatts against 76GW in the UK. Geothermal and hydro energy each meet about a third of needs, with wind making up a further 13 per cent, according to Kenya’s Energy and Petroleum Regulatory Authority.

Kenya’s low-carbon economy is evidence to some that African economies can pursue development while avoiding the fossil-fuelled path trodden by industrialised countries.

“We haven’t built any of that stuff at all, we have some of the lowest per capita emissions in the world,” says James Mwangi, executive director of the Dalberg Group, a consultancy specialising in tackling social problems. “And, with the costs of various renewable energy technologies coming down, even the basic business cases for some of the emissions-heavy technologies start to look iffy.”

Mwangi says he is a convert to the idea that African economies should embrace green energy. Technologies such as carbon capture, charcoal substitution for cooking stoves and hydrogen production would allow countries to bring in fresh revenue by developing carbon pricing schemes. “The question is who’s going to be the Saudi Arabia of carbon [trading],” he says, adding that investors are already counting on carbon prices of $40 to $50 a tonne. Last year, $84bn was raised collectively by governments through carbon trading.

However, Mwangi’s faith in the ability of African economies to jump straight to green technology is the minority view on a continent where many are pushing back on the idea that they need to limit emissions.

Instead, with hundreds of millions of people still lacking access to basic electricity and industry without reliable power, they argue that the continent needs to be given space to grow, even if that means increasing fossil fuel use.

While oil reserves in big producers such as Angola and Nigeria have stagnated, other countries have made big gas discoveries. Though funding from multilateral development banks has proved difficult, oil majors like Total, Exxon and Eni have not shied away from investing billions in developing new assets in Mozambique, Uganda, Ivory Coast and elsewhere.

Macky Sall, president of Senegal and chair of the African Union, told a conference organised by the Mo Ibrahim Foundation that African countries had every right to exploit their gas reserves. He criticised what he regards as the hypocrisy of western governments that are happy to guzzle gas at home but have declared a virtual moratorium on financing hydrocarbon projects abroad.

“You cannot tell us that renewables alone can develop a continent — it has never been the case anywhere else and it cannot be the case in Africa,” he said.

A white paper by the African Finance Corporation, the private-sector unit of the World Bank, notes that Africa contributes less than 4 per cent of greenhouse gas emissions. “Africans must balance the need to combat climate change with an urgency to develop the continent’s economies in order to alleviate hunger and poverty,” argues the report, titled Roadmap to Africa’s Cop: A Pragmatic Path to Net Zero.

Mo Ibrahim, a Sudanese-British businessman and founder of the eponymous governance foundation, says most African economies — outside coal-dependent South Africa — emit a fraction of the carbon of their western counterparts. Nigeria, Africa’s biggest economy and its most populous country, emits 0.6 tonnes per capita against 7.9 tonnes in Germany and 14.7 tonnes in the US, according to the World Bank.

“While gas is approved by the EU, coal is enjoying a revival in the US, China and some European countries,” he says. “If Africans say ‘Please we need a little gas, not to heat our swimming pools or to run our air-conditioning, but to have light,’ they are told ‘Please don’t pollute.’ But it is our turn to develop and end poverty.”

The debate leaves multilateral development agencies in an awkward position, bound by the rules of donor governments, many of which ban financing of new oil or gas developments.

If Africans say ‘Please we need a little gas to have light,’ they are told ‘don’t pollute’. But it is our turn to develop and end poverty

Holger Rothenbusch, managing director for infrastructure and climate at British International Investment, the UK government’s development investment body, says wind and solar are not yet capable of replacing oil-fired power stations because of their intermittent nature. Only when battery and storage technology becomes cheaper will it be possible to use renewables as a baseload power, he says.

The good news is that fast-changing technology “will make development pathways greener” than before, he says — although, in practice, many countries will develop fossil fuels if they have them, even at the risk of eventually being lumbered with stranded assets.

But even some fossil fuel-dependent economies will shift to greener technologies where they can, Rothenbusch says, envisaging what he describes as a hybrid model of development. “It will be a more nuanced conversation than either, ‘I go green or I go dirty’.”

Textbook economics will not avert this winter’s energy catastrophe