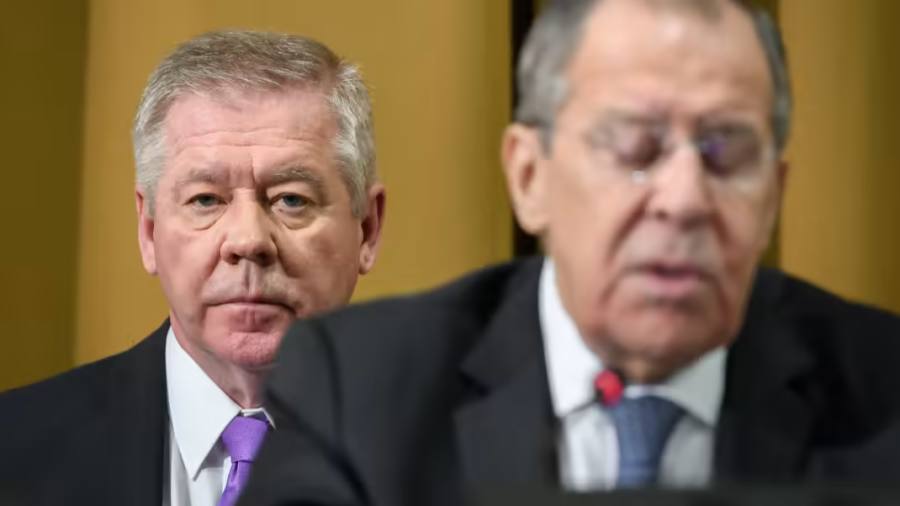 Good morning. As the six-month mark of President Vladimir Putin’s invasion of Ukraine approaches this week, a senior Russian diplomat has told the Financial Times that Moscow sees no possibility of a diplomatic solution to end the war and expects a long conflict.

Gennady Gatilov, Russia’s permanent representative to the UN in Geneva, said the UN should be playing a bigger role in attempts to end the conflict and accused the US and other Nato countries of pressing Ukraine to walk away from negotiations. There would be no direct talks between Putin and Ukraine’s president Volodymyr Zelenskyy, he added.

“Now, I do not see any possibility for diplomatic contacts,” Gatilov said. “And the more the conflict goes on, the more difficult it will be to have a diplomatic solution.”

His remarks, despite a flurry of shuttle diplomacy in recent weeks, marked a blow to negotiators who had hoped that a recent agreement on grain exports from Ukraine’s Black Sea ports could form the basis for a broader deal.

The UN had become mired in “politicisation” because of the war and that had “damaged the authority of the UN and its organisations”, Gatilov argued, making it unable to act effectively as a mediator.

He also accused western countries of using the conflict “as a tool of isolation of Russia . . . damaging our position, economically, politically”.

Thank you for reading FirstFT Europe/Africa. Have a great week — Gary

2. Bulb bailout cost to top £4bn by spring The cost to UK households of bailing out nationalised energy retailer Bulb is expected to soar to more than £4bn by spring, saddling every home with an additional £150 or more on its bills next year unless the government achieves a sale.

3. Europe ‘risks losing green hydrogen funding to US’ Europe will struggle to meet green hydrogen targets and reduce dependence on Russian gas unless it matches the new US climate subsidies package, Fortescue Future Industries chief Mark Hutchinson said in an interview. “All the green capital is going to be flowing into the US and [Europe is] just going to miss out,” he said.

4. Germany’s accounting regulator says auditors ‘too close’ to clients BaFin’s head of accounting regulation Thorsten Pötzsch has lashed out at German auditors, accusing them of being “too close” to clients and calling for more “professional scepticism” in the wake of Wirecard’s collapse, in his first interview after an overhaul of the country’s accounting supervision.

5. PwC sued by auditor after ‘pub golf’ brain injury The Big Four firm is being sued by an auditor who claims he suffered a serious head injury after attending a celebratory work event that involved an “excessive” drinking game of “pub golf”.

Former F1 boss goes to court Bernie Ecclestone is due to appear before Westminster magistrates’ court charged with “fraud by false representation” for allegedly failing to declare overseas assets believed to be worth more than £400mn.

Why staff are being sent to bond with nature According to a recent global survey, most workers are unable to explain their own companies’ climate commitments. Could environmental retreats — from sleeping in the woods to hugging trees — solve the disconnect?

UK government’s favourite diagnostics firm faces its next test Randox, one of the so-called winners of the pandemic, made hundreds of millions from government contracts for Covid-19 diagnostics tests. Now, it’s using that windfall to expand its health clinics in an effort to bolster preventive care and give people control over their own health tests.

Soaring fertiliser prices threaten to spark Africa food crisis The price of nitrogen-based fertilisers has hit record highs in line with natural gas costs in the wake of the war in Ukraine. Growers have cut usage in response, threatening to reduce food production and deepen a global food crisis and raising the prospect of social unrest on the continent.

Why Biden is taking on private equity The influence of buyout groups on US industry has never been greater. But the antitrust landscape is changing after years of lenient policy, with regulatory agencies under President Joe Biden’s administration seeking to crack down on private equity and prevent it from “rolling up” vast chunks of American business.

WeWork founder Adam Neumann’s VC-fuelled comeback After WeWork soared in valuation, crashed and became a cautionary tale, its mercurial founder is back with a new start-up, Flow, which he claims can disrupt the property industry. Andreessen Horowitz is betting he is right, to the tune of $350mn.

If you’re looking for your next destination to escape to, check out these small, thoughtful hotels from Bhutan to Bali.

A winter energy reckoning looms for the west

Why We Need A Monetary Constant – Bitcoin Magazine