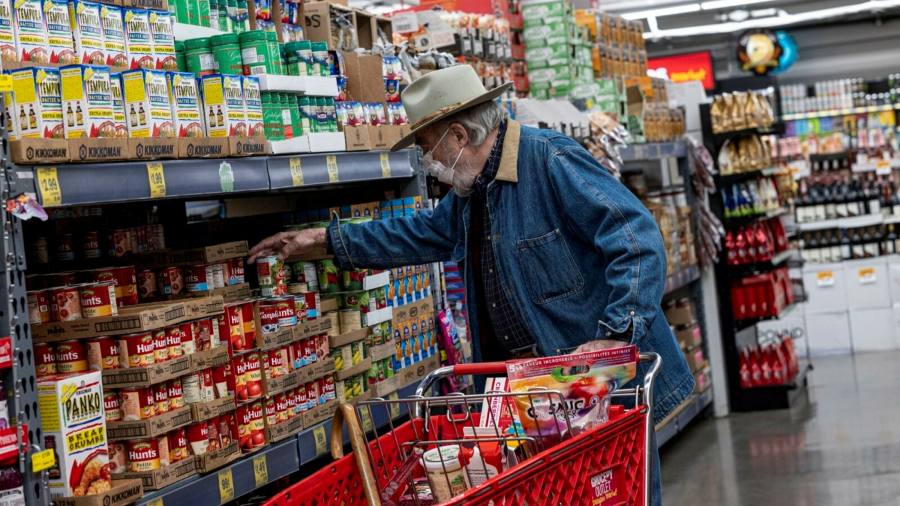 This article is an on-site version of the Free Lunch newsletter. Sign up here to get the newsletter sent straight to your inbox every Thursday

There will be no such thing as a Free Lunch next week, but Martin Sandbu will be back on August 25.

The cost of shipping a 40ft steel box across the world’s oceans has sunk. The nickel in a nickel is no longer worth more than the nickel itself. Even US headline inflation is falling.

There have been some pretty convincing signs of late that the price surges in markets, from copper to used cars, that we’ve seen over the past year might now be behind us.

Is it time for Team Transitory, a camp that took more blows than a UFC fighter during the first half of 2022, to launch a fightback and say inflation has been defeated? Not quite.

That’s not to say the falls in the cost of container shipping and commodities don’t mean something. They show us that global trade, far from being on its deathbed, is resilient. That dynamism will help drive down supply-side price pressures.

Yet these pandemic-era bottlenecks were — as their name implies — always going to dissipate. Meanwhile, the massive (and less soluble) supply-side risk presented by Russia cutting off, or even limiting, gas flows to Europe remains a threat.

To get a sense of the degree to which energy prices are driving headline inflation, consider this. According to Bank of England deputy governor Ben Broadbent, between the first quarters of 2021 and 2023, the impact of the shock on households’ utility bills is likely to be five times as big as it was between 1974 and 1976 — the worst two years of the 1970s, a decade renowned for its oil price crisis.

We don’t want to downplay the good news.

In the US, less exposed to the impact of the Ukraine war, headline inflation may well have peaked. While it may take a little longer in Europe, the record-high prints will soon subside here too.

But we would caution against seeing today’s print as evidence that the Federal Reserve, and other central banks, may be about to pivot to a much less aggressive strategy — or, as some investors are now pricing in, cut rates early next year as recession bites.

What really matters for policymakers is not where inflation turns but how quickly it slides towards a level they are comfortable with.

Our bet is that this level is between 2 and 3 per cent. Yet there’s much to suggest price pressures could stick around the 4 to 5 per cent mark for some time yet.

The possibility of a sluggish shift back to 2 per cent is not just about the risk presented by energy prices, substantial though it might be.

While monetary policymakers, including Fed chair Jay Powell, have been keen to heap the blame for failing to spot inflation on supply chains and the war in Ukraine, that’s not the only element that has been driving prices higher.

As Stephen Cecchetti, of Brandeis University, put it: “It is odd that central bankers are focusing so heavily on supply-side inflation when demand is such a big component of the surge, especially in the US.”

A core part of the demand-side story is the hotness of the labour market. Tiffany Wilding and Allison Boxer, economists at bond manager Pimco, pointed out in a note published on Wednesday that wage inflation in the US has broadened from the low-wage, low-skill services sectors to a range of industries, occupations and skill levels. Productivity levels, meanwhile, have fallen.

According to their estimates, unit labour cost inflation is at 7 per cent — a level that has historically implied core CPI inflation of about 4 per cent. If Powell really wants to bring inflation to as low as 2 per cent, it increasingly looks as though the Fed will have to destroy jobs.

Then there is inflation’s self-fulfilling element, where its mere presence creates more of the stuff.

Joanna Konings, a senior economist at ING, points to the likes of UK dairy farmers, who may have spent years unable to raise their prices due to the major supermarkets’ sway, but who can now point to soaring energy and commodity prices and ask for more. “When inflation is easy to point to — when it’s clear costs are going up in a very visible way, then that strengthens the hand of any supplier. Producers are able to point to price increases, and in turn demand more from their customers,” she said.

This world of margins does not contain infinite room for manoeuvre. Consumer prices for staples such as food and energy and shelter have soared at a pace that has left many people facing the worst cost of living crisis of their lifetimes. That crisis — and central banks’ rate rises — will weigh on demand. Yet this scrap between supplier, retailer and consumer is likely to take a while to play out. While it does, uncomfortably high inflation will prove harder to shift than a big boat stuck in the Suez Canal.

The Lex Newsletter — Catch up with a letter from Lex’s centres around the world each Wednesday, and a review of the week’s best commentary every Friday. Sign up here

Unhedged — Robert Armstrong dissects the most important market trends and discusses how Wall Street’s best minds respond to them. Sign up here