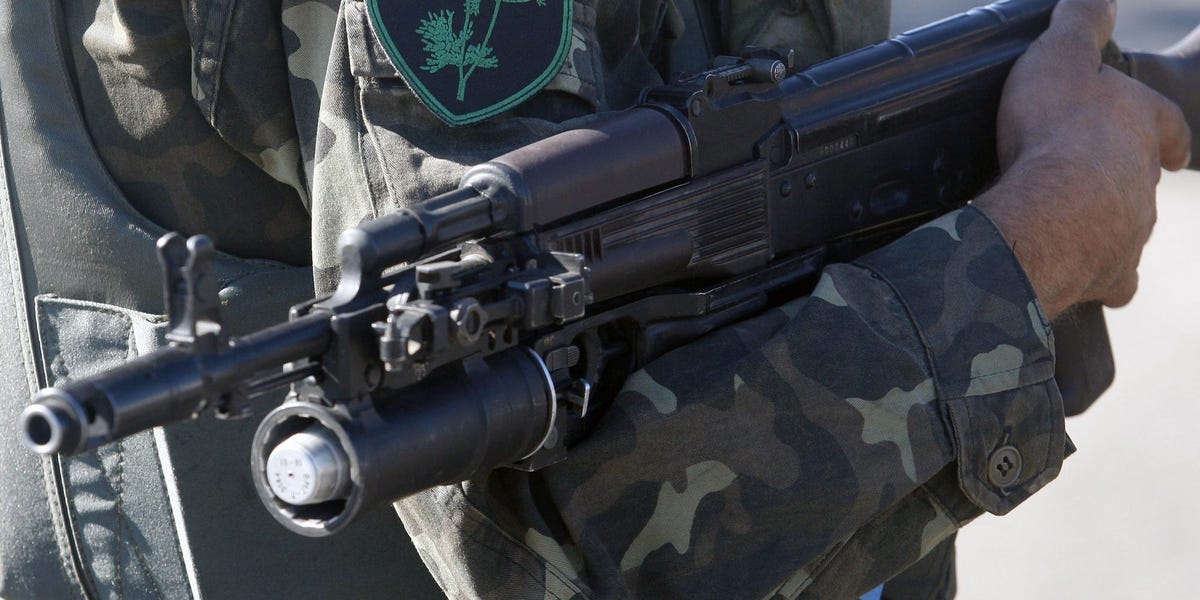 
The war in Ukraine is in its sixth month and shows no signs of slowing down. Today, we’ll take a peek at the weapons used by the Ukrainian special forces.

Like a lot of former Soviet bloc countries, Ukrainian special forces’ tactics, equipment, and even special operations forces are very Russian. This also applies to their names, with units like Spetsnaz and Alpha group existing in both Russia and Ukraine.

Ukraine has had a bit of a western influence as of late, and that’s even beginning to show with its small arms.

The backbone of the Ukrainian special forces — assault rifles

While the Ukrainian special forces are modernizing, they do retain a large number of small arms from Russia. The main rifle of the Ukrainian military is the AK-74 series. These 5.45x39mm assault rifles provide a very reliable and controllable platform. The smaller 5.45 caliber provides softer recoiling rounds with less muzzle rise.

The Ukrainian special forces outfit these rifles with the latest in modern accessories. This includes Eotech optics, backed by 3X magnifiers. They often use M4-style stocks, rial systems, lights, and suppressors.

When you need an ultra-short platform in the AK world, the AKS-74U, aka the Krink, is the way to go. This ultra-short platform fires the 5.45 cartridge from an 8.1-inch barrel. This platform excels for use inside vehicles, armor, and for extreme close quarters. Ukrainian special forces seem to use them only for specific situations, and these fire-breathers are armed with suppressors.

These ultra-short designs lose lots of range when compared to the AK-74, and it’s why they are rarely used and are niche weapons. The AKS-74U wouldn’t be a common-use item due to its extreme limitations.

The Fort-221 is a Ukrainian-licensed and -produced assault rifle that hails from Israel where it’s called the 5.56 Tavor. The Fort-221 swapped the caliber to 5.45×39 to make it more appropriate for their current caliber of choice. This is a big step forward in the modernization of the Ukrainian military.

As a bullpup, the weapon places the action and magazine behind the trigger and creates a much more compact weapon without a loss in barrel size. In fact, its overall length is slightly shorter than the AKS-74U with a 15-inch barrel. Ukrainian soldiers wielding the Fort-221 have a very compact rifle that’s quite capable at all infantry ranges.

The weapon is slightly smaller, and using 9mm makes it easier to suppress while retaining a much shorter barrel. Like the Fort-221, it remains modular and modern.

While the majority of the Ukrainian army utilizes the SVD Dragunov for sniping and designated marksmen roles, the Spetsnaz units of the Ukrainian special forces wield a much more modern weapon. The Zbroyar Z-10 is based on the United States’s own AR-10 and chambers, the 7.62 NATO round.

As an AR-10, it’s incredibly modular and very accurate. Shooters can outfit the weapon with a variety of optics, bipods, lights, lasers, and accessories. Collapsible and fixed stocks are available, as are various barrel lengths and magazine capacities. It’s a precision rifle that’s semi-automatic and offers increased range and accuracy over both the Dragunov and the AK series of rifles.

The Austrian Glock 17 is one of the most popular pistols on the planet. It arms dozens of countries and hundreds of police forces. Its adoption by the Ukrainian special forces is one more notch in Glock’s belt. These pistols are well made, extremely reliable, and very simple. They chamber the 9mm NATO round.

The polymer frame construction and striker-fired design changed the firearm forever. The Glock 17 is one of the top chosen pistols by special operations units around the globe. It’s not a surprise to see them in the hands of the Ukrainian special forces.

The Fort-17 features an exposed hammer with a double-action/single-action trigger. The frame appears to be a polymer, and the weapon chambers 13 rounds of 9mm Makarov. Not much information is out there, but the trigger guard appears massive and accommodating to gloved hands.

In terms of light-support weapons, the Ukrainian special forces turned to Israel once more. The Israeli Negev light machine gun became the Fort-401.

The Fort-401 is a 5.56x45mm caliber, belt-fed, light machine gun designed to provide squad support. It’s a modern and modular choice that outperforms the automatic rifle-type RPKs in common service.

At a little under 16.8 pounds, the Fort-401 provides plenty of firepower for the Ukrainian special forces. It’s a very reliable weapon designed to work in a variety of different environments, from the harsh deserts of Israel to the frozen Ukrainian landscape.

The Ukrainian special forces are seemingly well armed with an interesting mix of firearms, from the AK series, first built in the 1940s, to the very modern Tavor. This eclectic combination gives them a weapon for almost any task and an ability to fight on any ground.